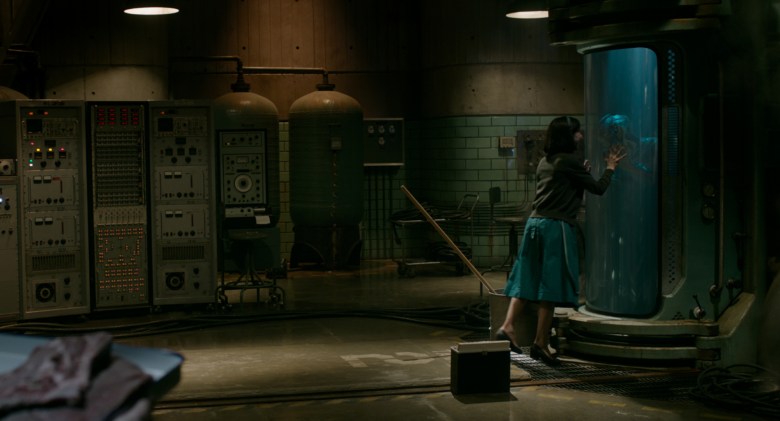 Paul Austerberry breathed a sigh of relief when he found out that it was going to be too expensive to make “The Shape of Water” in black-and-white. That’s because the Oscar and ADG-nominated production designer was looking forward to a colorful experience. He got his wish: Guillermo del Toro’s Cold War era fairy tale romance between mute custodian Elisa (Oscar-nominated Sally Hawkins) and her Amphibian Man (Doug Jones) became a surreal journey in world building.

“Knowing Guillermo, it gets pushed theatrical and slightly fantastical, but we wanted to start very grounded in reality to maintain the feel of that [1962] period, but then still have the magic of Guillermo’s visual storytelling and the fairy tale,” Austerberry said. “It helped that there are these underlying problems and issues that are addressed by Guillermo when ‘America Was Great Again.'”

Building the “Shape of Water”

Austerberry and the art department did four weeks of intense research into the period, including labs, to help set the tone. They shot in Toronto and used as many practical locations as possible. The production designer looked to the brutalist architecture of the period for the lab. “We thought it could be a bit oppressive and institutional,” said Austerberry. They used portions of the University of Toronto’s Andrews Building and modified it practically and digitally. For the interior set of the Baltimore lab, they continued to use the brutalist concrete style. The color palette veered on the teal side because del Toro envisioned that as the noir-like, oppressive future.

However, the area where Elisa and the Amphibian Man interact romantically in the lab where he’s confined became an intimate wonderland. “The history of this lab was that it used before for water pressure and it had the patina of rust and age,” added the production designer. He’s placed in a pressurized tank with a glass front. When he comes out of that pressurized tank, he’s placed into an open water tank.” And, for the shape of that tank, Austerberry used a stepped pyramid in keeping with the Amphibian Man’s former, god-like stature in the Amazon. “And, in the background of this open water pool, Guillermo wanted the look of a setting sun with rusty steam pipes,” he said. “So we designed a stylized pipe system to achieve that.”

For the upper level of the command center, Austerberry designed a ceramic tile mural promoting rocket ships and space travel, inspired by a mosaic he saw in Portugal.

At Home with Elisa and Giles

By contrast, del Toro was enchanted with the architectural design of Toronto’s  iconic Massey Hall. So he had Austerberry transform it into a movie theater, where Elisa resides above in adjoining apartments with her gay friend, Giles (Oscar-nominated Richard Jenkins). While her apartment contains a cool green vibe, Giles’ world is infused with warm browns and golds. But the concept was to join the disparate-looking apartments through the love of cinema. There’s even a window arch inspired by “The Red Shoes.”

“It had these symmetrical fire escapes radiating both ways from a central red
door high up,” Austerberry said. “And the idea was that the space above the theater at one time would’ve been a grander place for parties and got truncated and split in half in the ’20s or ’30s when it became a movie theater. And her side was used for film canister storage, and there’s some remnants of that with some racks near her bedroom that she’s modified for her shoe fetish.

“And what we decided was that her room fell to disuse and the other side [where Giles lives] got used and renovated,” added Austerberry. “We thought there might’ve been a small fire that made the roof leak and water permeates that. And so the room got shaped over time by water. And it rotted the floors and stripped off the hardwood, and and we allowed for the sub floor below to have gaps for the movie theater lights to emanate through the floor boards.” Guillermo del Toro on the set of “The Shape of Water” with Richard Jenkins and Sally Hawkins.

Even the wall became a piece of art with shapes of water. In addition, Austerberry was inspired by Japanese woodblock prints of crashing waves, so he had his scenic artist plaster and paint a huge crashing wave reaching over the entrance door with several layers of colors. “Her whole apartment became quite a fantastical, romantic space,” Austerberry said.

This Article is related to: Awards and tagged Guillermo del Toro, Oscars, production design, The Shape of Water