The chemistry is palpable between creator and muse. 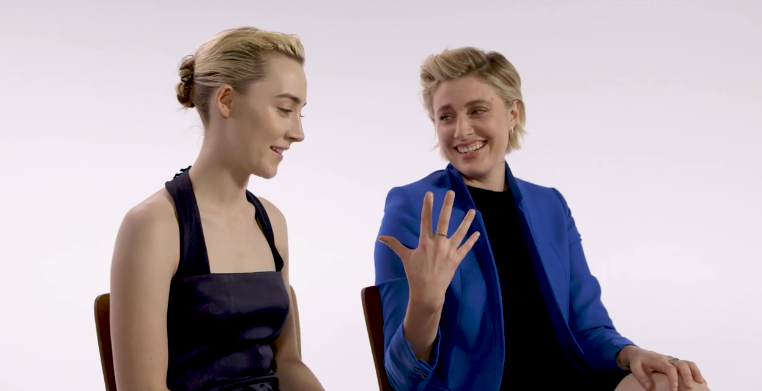 So rarely does a perfect creative match come along that Greta Gerwig and Saoirse Ronan seem absolutely smitten with each other. The “Lady Bird” star is hoping to earn her third Oscar nomination for playing “the titular role” (as Beanie Feldstein’s Julie would say), and it’s not lost on her what a gift Gerwig’s fantastic script and direction were. Similarly, Gerwig knew she had found her Lady Bird as soon as Ronan read the script at a fated meeting at the Toronto International Film Festival.

“You have these words on the page, but it’s such a leap of faith that you’re gonna find the person who suddenly makes it live in front of you,” Gerwig said during a sit-down interview for IndieWire’s Awards Spotlight series. “I just instantly felt— ‘Oh, there she is. That’s her’ — and I had a certainty when I heard her read it and that certainty never flagged.”

“We were very very excitable around each other for the first few weeks,” Ronan recalled of filming. “When you meet someone that you instantly click with, when you know that person wants to do good work with you, it makes you take that leap of faith too.”

“Lady Bird” is a coming-of-age story about a teenager living in Sacramento whose fraught relationship with her mother provides the spine to her year fumbling toward some kind of self-reckoning. As Lady Bird’s mother, Laurie Metcalf is alternately ferocious and loving, a dynamic established during the film’s shocking opening scene: After finishing a book on tape in the car, mother and daughter switch instantly to screaming at each other, prompting Lady Bird to open the car door and roll out.

According to Gerwig, it was the last scene they shot.

“I wanted the entire thing to be simple and economical,” she said. “I never wanted it to feel like we were doing something more than needed to be done. Just watching the two of them do it, it was genuinely thrilling. It’s the thing that you hope happens on a movie.”