Star Wilson Cruz, director Jonathan Frakes, and the show's producers reveal that the shocking moment from the mid-season premiere will lead to a whole new chapter for "Trek's" first gay romance. 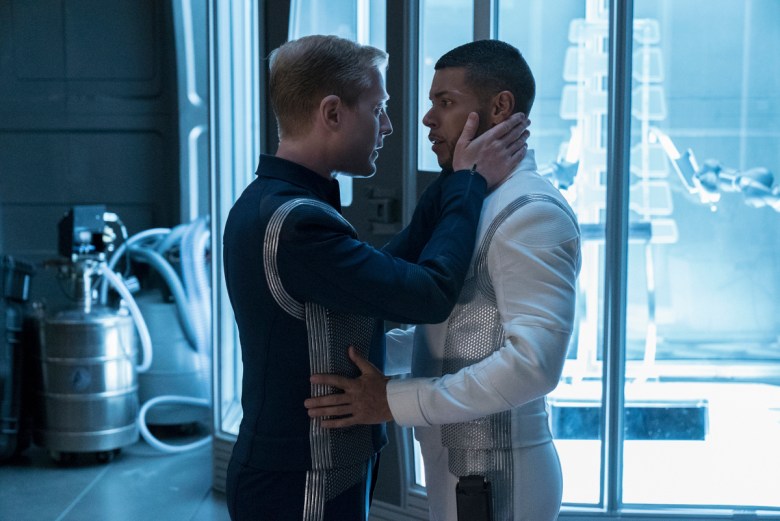 Human life is a fragile thing — it can end in mere moments, with a few words and a panicked snap. And that’s what we saw happen on “Star Trek: Discovery” in the mid-season premiere, when Dr. Culber (Wilson Cruz) confronted Lt. Tyler (Shazad Latif) with the news that his identity might be suspect, and Tyler reacted by breaking Culber’s neck.

In a matter of seconds, “Star Trek: Discovery” delivered perhaps the show’s most shocking twist to date — and one that may have seismic repercussions for fans of the show who have embraced the relationship between Culber and Lt. Stamets (Anthony Rapp). Which is why everyone behind-the-scenes wants to make it clear: While, yes, this is a tragic moment for the first gay love story on a “Star Trek” series, Dr. Culber’s death is not the end.

IndieWire spoke with executive producers Aaron Harberts and Gretchen Berg, episode director Jonathan Frakes, and Cruz about making “Despite Yourself,” and while they wouldn’t reveal what comes next, they did say there is a lot more to come as the season progresses.

“I’m familiar with the kill your gays, bury your gays trope from TV,” Cruz said flat out. “It is disheartening and, you know, unpopular, to say the least. This is not that.”

“This is something we knew we wanted to do pretty much from the minute we started breaking the arc of the entire season,” Harberts told IndieWire. “We wanted to have this be the first chapter for this gay couple, who we plan to make one of the most important couples on our show. So, to do that, we needed to tell some tough stories to get this couple where they need to be, and to continue to expand their importance in the fabric of the show. So, this is a first step that we knew we had to take, and we weren’t afraid to take it, because we know where it’s going.”

“It Had to Come From Character and Emotion”

Cruz found out that Culber was going to be killed from Harberts and Berg a few weeks before production on the episode, while shooting his first day on “13 Reasons Why” Season 2. “There were tears. I won’t lie,” he said.

Berg said that “Aaron and I have known Wilson for a really long time — of course, we were fans of ‘My So-Called Life,’ and then, we worked with him on an episode of ‘Pushing Daisies,’ and he’s a friend, and we were really excited when he was cast. We really wanted him to play this part, and so, then, you’re like, ‘Oh, it’s heartbreaking, because, oh, it’s Wilson!'”

Harberts also noted that “it’s a testament to Shazad Latif’s performance that you feel tremendous sympathy for him; and I’ve watched this episode, many, many, many times, and it’s a testament to Jonathan Frakes’ direction, and to Shazad and Wilson’s performances, that you feel utter horror. Every single time you watch that death, you feel utter horror and revulsion; and yet, at the end of the episode, you also see that the character who did it is someone who is coming apart at the seams. You can’t condone what he did, but I think that you have to feel some sympathy for him.” “I Needed to Go to Some Dark Places”

Culber’s death scene was one of the first scenes they shot for the episode, meaning that it was one of the first times Culber worked with Frakes as a director. “I loved working with Jonathan,” Cruz said. “I was a big fan of ‘Next Gen,’ and so I riddled him with questions throughout the experience, poor thing.”

Frakes said that “I fell for [Culber/Cruz] right as soon as I met him, so I was sorry to see that they were going to kill him.”

For Frakes, what was key about directing a scene like this was “to make sure you get the beats in order. Don’t play the results before it happens. It’s like a dance, it’s like whenever you do a murder or you do a sex scene it’s got to be staged in a way that everybody is on the same page physically and they need to be comfortable.”

Cruz complimented Frakes with giving him a lot of time and space for the scene, because “I needed to go to some dark places.” In fact, on the first take, “I think my tendency, just on a human level, was to get it out. You know, to get the words out and to get, you know, when I first started the scene. [Frakes] is the one who came to me and just said, ‘Take your time. We’re not in a rush.’ He was like, ‘We’re streaming.’ He was really gentle and really lovely to me and I’m never going to forget that.”

Noted Frakes, “One of the great advantages of being a recovering actor, is that I kind of speak actor, so that I know how to prepare, I know how other actors prepare.”

It was also one of the first times Cruz and Latif got to work together. “We both came to these scenes with guns blazing and ready to play,” Cruz said. “It was very quick, and so we had to come in really focused because we knew how important these scenes were, and he gave me everything he had and vice versa. It was, on a professional level, incredibly satisfying.”

“There Was No Other Choice”

Beyond what this means for the characters, there’s the larger consideration of how this impacts the fans of not just this show, but many other stories featuring LGBTQ characters.

The “bury your gays” trope was something the producers were aware of, but not to the degree to which it’s recently been a conversation point, because, as Harberts explained, they were so focused on “Discovery” production that “I went radio-silent when it came to consuming media. So, it’s something that I knew about, but it certainly wasn’t something that was in the forefront of my mind, because I guess I just knew that we weren’t ever going to be doing that… I mean, we’ve got an out gay writer, and you’ve got two out gay actors as part of the story. I’ve said, ‘If you can’t trust this team, then I don’t know if you can trust anybody when it comes to telling this particular story.'”

Cruz has been a passionate advocate for LGBTQ representation on screen, even working for two years as a GLAAD industry liaison specifically on issues like this. “A lot of it is GLAAD comes to you as a resource,” he said. “They identify a problem and they offer themselves as a resource as to how to do better and how to maneuver a difficult situation, if you have one… I think the reason why we see more LGBTQ people on TV now is because of the work that that organization has done throughout the years to show creative people how to do it right.”

GLAAD has issued a statement of support for “Discovery” following “Despite Yourself,” noting that:

“Alongside so many fans, GLAAD cheered the arrival of ‘Star Trek’s’ first gay relationship, and we share in their mourning over the death of a beloved groundbreaking character. Death is not always final in the ‘Star Trek’ universe, and we know the producers plan to continue exploring and telling Stamets and Culbers’ epic love story. Wilson Cruz has leveraged his talent as an actor to create a smart, lovable, and strong character in Dr. Culber, once again bursting through doors that were once closed to gay actors in Hollywood. We look forward to watching their love story unfold.”

Cruz noted that his biggest issue with the concept of “burying your gays” is that “it makes me feel like these characters are disposable in a lot of ways. It’s also problematic that so many of them are not only women, but people of color, who are usually the victims.

“So what that says to us as a society, subliminally, is problematic. You know, and just I think for me as an actor or a viewer I always think, ‘Well what was the other choice here?” You know, was there another choice?’ In our case, there was no other choice given where we’re going, because this is part of the story that we’re telling.” While those involved wouldn’t spoil exactly what to expect as the story progresses forward, they did offer a few clues — surprisingly rooted in the real-life science of mycologist Paul Stamets, who inspired the character of Lt. Stamets and has spoken and written a great deal about how mushrooms may legitimately hold the secret to mortality.

“If you look at the work of the real Paul Stamets,” Harberts said, “he’s so focused on the cycles of life and death. So, not only did we want to test [Lt. Stamets’s] science as it pertains to truly challenging him emotionally, but challenging him to confront death from the standpoint of his own science.”

Berg added that “I would say, if you’re curious for more clues; if you get to know what [Stamets] is really all about, and his research with mushrooms, and the mycelial network, and fungi, there will be clues in there.”

While the science might have inspired the decision to go in this direction, the emphasis will remain on the romance. As Cruz said, “When Aaron and Gretchen first approached all of us about what we were going to be doing on the show, they were very clear that this show was driven by these relationships and character-driven. That the science fiction came out of that, but that the relationships are the most important thing about the story, and what they discover about themselves and each other.”