The Mirror Universe gets less fun as Season 1 continues to keep us on our toes. 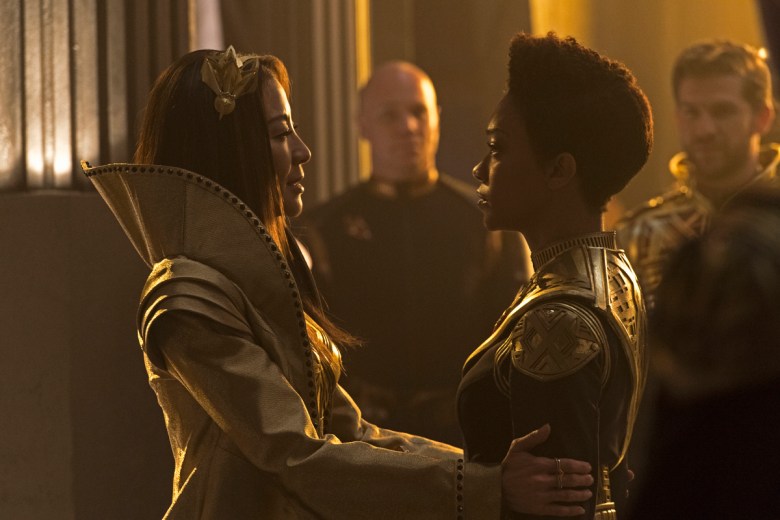 We continue our not-so-pleasurable cruise through the Mirror Universe, with Emperor Georgiou (Michelle Yeoh) stepping in as cruise director for Burnham this week. Initially, Burnham tries to play her mirror self but the ruse doesn’t last, and she confesses her true identity moments before her potential execution. Fortunately, that works out, and she and Georgiou strike a deal — information about the Discovery’s spore drive in exchange for the information they need to get back to the Prime Universe.

Just one snag in that plan, though: Lorca may or may not be all that interested in going back to the Prime Universe, because that’s not where he’s from! Turns out Tyler isn’t the only one with a secret identity on the ship, as Captain Lorca has been originally from the Mirror Universe this whole time, and very specifically went to the Prime Universe in order to connect with Burnham, as he and her Mirror Universe equivalent had a… connection. Meanwhile, Saru manages to get the Klingon prisoner L’Rell to help with finding a solution to this messy Tyler/Voq situation, and Stamets finally makes his way back to the land of the living after communing with his Mirror Universe self (also trapped in the mycelium network) and the echo of Hugh Culber.

The most important thing (beyond him getting a little more time with his tragically murdered lover) is that the mycelium network is sick, and healing it is a chance at getting home. Except of course, did we mention that Lorca is from the Mirror Universe and may basically be full-on evil? Because that’s pretty important, too. As soon as it happened, everyone involved with “Discovery’s” production made it very clear that Culber’s brutal death at the hands of Tyler was not the end of his relationship with Stamets, and technically, we got our first direct evidence of that in “Vaulting Ambition.” But it wasn’t the sort of storyline that indicates a smooth, obvious path toward returning to “the way it was” between “Star Trek’s” first gay romance, and we’re still in wait-and-see mode as to whether or not there’s really a chance that these lovers will reunite.

Also, the fact that there may be a way back for Tyler without Voq in his head is perhaps a sign that he and Burnham could still find a way back to each other. But that’s not likely the most important thing on her mind at the moment.

Well, if you were curious as to whether or not Bryan Fuller’s influence on “Discovery” was still lurking, there’s the fact that Burnham (unknowingly) picked out her dinner like choosing a lobster from a tank. Between this and the revelation from earlier in the season that when Captain Georgiou was killed by the Klingons, the Klingons later ate her corpse, this is undoubtedly a more cannibalistic take on the final frontier than we’ve gotten in years past. Is that a good thing? It’s settling a little weird in the stomach at this point. Much like, one imagines, actual Kelpian ganglia — though in the hands of a culinary master like Hannibal Lecter, they’d likely be delicious. And Yeah, About Lorca…

To be completely honest here: Did. Not. See. It. Coming. While so many fan theories have circulated around “Discovery” since its premiere, many of which have been proven to be correct, this was one I hadn’t seen mentioned (though Googling does confirm that a few people had been speculating as early as last October) and it’s a doozy.

Also, while “Discovery” has proven itself to be relatively low on mercy, let’s offer up this small bit of thanks: There was definitely the possibility for Mirror Universe Georgiou’s affection for Burnham to have twisted from maternal to incestual, and while that appears to have been a factor in MU!Burnham and MU!Lorca’s relationship, at least we don’t have to worry about two instances of that…yet, at least. After all, we’re still in the Mirror Universe. Things can go topsy-turvy fast.

“Your people are dangerous… there is a reason they’re classified.”
— Emperor Georgiou

Whether there is real honor to be found within someone who has risen to the rank of Emperor in the Terran Empire is yet to be seen, Michelle Yeoh did a lot of heavy lifting to ensure that even in the Mirror Universe, Georgiou is a strong, competent leader (albeit one who isn’t afraid to murder her entire council on basic instinct). And this was a moment that offered up a bit more insight into why a theoretically honorable woman would also be part of such a brutal regime. In 2018, it’s perhaps easier than we’d like to imagine what it might be like to be part of a system of government that actively rejects free thought and diversity. Overshadowing everything else that happened in “Vaulting Ambition” is the big twist regarding Lorca, which genuinely caught us off guard, especially in comparison to the Tyler/Voq reveal, which had been built up for weeks prior. And the result: Damn was that a good twist, and well-executed.

It’s taken a while to describe “Discovery” in comparison to other “Trek” series, but this might be the best way to do it: Whereas past “Treks” have felt like playing in the holodeck, “Discovery” is like playing in the holodeck… with the safety protocol permanently disabled. We really are seeing what this franchise looks like in a non-PG environment — Klingon boobies, F-bombs, and all. And yet it still has some engagement with the original show’s optimism, making it all the more fascinating.