From impressive first-timers to reliable talent delivering on expectations, here are the highlights from this year's festival. 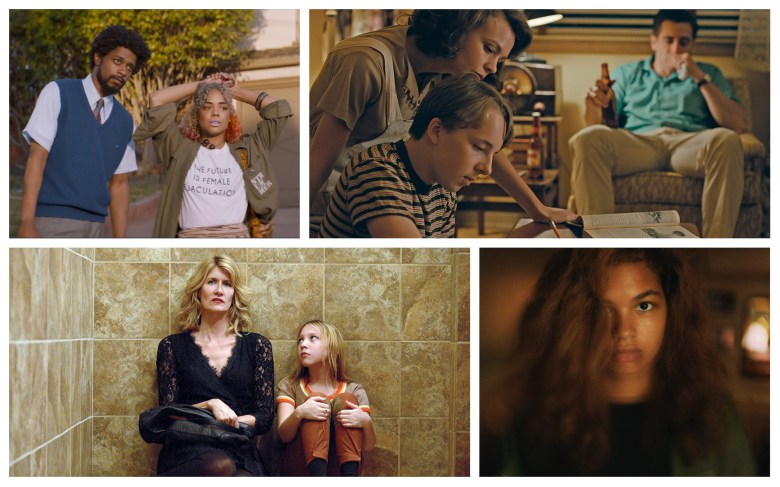 Another year of the Sundance Film Festival has come and gone. While IndieWire has been covering the whole program over the course of the 10-day gathering, some movies stood out more than others. In a year rich with female-driven stories and progressive conversations more than marketplace activity, Sundance fell short of crowning one big breakout to rule them all. However, it was hardly a weak year for anyone spending enough time digging through the lineup. From illuminating documentaries to rousing comedies and wild midnight movies, here are our highlights from the 2018 edition.

“Sorry to Bother You”

“Sorry to Bother You” is a blast to the solar plexus, a “Get Out” on acid that aligns the visual wit of Spike Jonze with the political sensibilities of Spike Lee. Lakeith Stanfield is outstanding as the earnest young telemarketer who harnesses the power of White Voice, and Tessa Thompson is fearless as his righteous artist girlfriend who wears her heart on her earrings. However, the most exciting performance comes from writer-director Boots Riley, the rap veteran who’s unleashed his filmmaking debut. This is an artist with creativity to burn, and we can’t wait to see what he does next. —DH

In “Won’t You Be My Neighbor,” the touching and insightful survey of Fred Rogers’ decade-spanning career from director Morgan Neville (“Twenty Feet From Stardom”), the filmmaker explores Rogers’ capacity to explore complex themes through the lens of a kid’s program that took a dead serious approach to his young viewers’ needs. Though Rogers died in 2003, he’s a ubiquitous presence throughout the movie, exhumed by ample archival footage and the plentiful anecdotes from family, friends and experts demystifying his legacy. Despite the celebratory tone, “Won’t You Be My Neighbor” shies away from the hagiographic trappings of this adorable material. Rogers may have remained within his utopian bubble, but he excelled at inviting others in. “Won’t You Be My Neighbor” is a powerful reminder that he was either way ahead of his time, or too late. —EK

OK, Bo Burnham, fess up: you read my middle school diaries…or at least the diaries of the many, many women who confessed that your first-time feature seemed to depict their own experiences on the big screen in a way that’s almost haunting. While there is a specificity to the story Burnham tells — so much of young Kayla’s (breakout Elsie Fisher) journey is about the influence and prevalence of social media in young lives, a wholly modern problem — it never ruins the sense that this coming-of-age tale is daringly universal. Good-hearted, honest, and so real that your heart can’t help but ache for Kayla, for kids everywhere, for kid you, “Eighth Grade” is a gem. —KE

One of the boldest and most invigorating American films of the 21st century, Josephine Decker’s “Madeline’s Madeline” is an ecstatically disorienting experience that defines its terms right from the start and then obliterates any trace of traditional film language, achieving a cinematic aphasia that allows Decker to redraw the boundaries between the stories we tell and the people we tell them about. The story of a single mother Regina (the multi-talented Miranda July), her irrepressible teenage daughter Madeline (major newcomer Helena Howard), and the unspecified mental illness that drives a wedge between them when the latter joins an experimental theater troupe, this mesmeric tour de force claws at its premise with incredible precision, using. The result is an experimental movie with the emotional tug of a mainstream hit, a fragmented coming-of-age drama that explores the vast space between Jacques Rivette and Greta Gerwig in order to find something truly new and ineffably of its time. — DE

The festival’s most-talked about film, Jennifer Fox’s semi-autobiographical narrative debut, “The Tale,” has been rightly billed as the first great #MeToo movie, but it’s also a deeply personal portrait of a complicated woman, told with an inventive and unique cinematic language. The heartbreaking drama follows Fox’s on-screen surrogate (Laura Dern) as she comes to terms with a decades-old molestation experience; it’s spawned by her mother’s (Ellen Burstyn) discovery of a “story” she wrote when she was 13, documenting her experiences with a pair of older coaches (Jason Ritter and Elizabeth Debicki). A documentarian and journalist in her own right, Fox also uses the film as a clever way to explore memory, and its fallibility; as Fox, Dern struggles to take possession of her own story, even when she’s desperate to rebuke the “victim” label forced on her by loved ones. The film will likely continue to be hailed for its “timely” nature (weirdly, it was filmed almost three years ago), but it’s also a true cinematic achievement, the best mix of story and style the festival put on offer this year. —KE

Even before Nicholas Cage does a line of coke off a shard of broken glass in “Mandy,” the movie has entered batshit insane territory. Panos Cosmatos’ followup to his wacky debut “Beyond the Black Rainbow” is another stunning dose of psychedelia and derangement, this one folded into the constraints of a woodsy revenge thriller, but that’s mainly an excuse for Cage to unleash his most psychotic extremes. Cosmatos gives him plenty of opportunities in this hypnotic midnight movie, which veers from astonishing, expressionistic exchanges to gory mayhem without an iota of compromise. For years, Cage has swung wildly in search of gonzo material; at long last, he’s found a movie willing to match his wild intentions. —EK

New York writer-director Tamara Jenkins follows up her Oscar-nominated “Savages” a decade later with a Netflix production starring Kathryn Hahn and Paul Giamatti that premiered opening night to raves. Jenkins took two years to write a spec script about a mid-life biological battle of the sexes, which draws from hers and husband Jim Taylor’s struggles to have a child. In “Private Life,” her central couple desperately turn to their beloved niece (breakout Kayli Carter) to see if she would be willing to donate an egg for fertilization; she’s game, but her mother (Molly Shannon) is appalled. In one heartrending scene, the daughter tells her mother she can do what she wants with her body. The film is a naturalistic, believable portrait of a marriage fractured by a fortyish East Village couple’s infertility. They aren’t rich, they aren’t beautiful, and they reveal the all-too recognizable rhythms of a marriage under duress. —AT If “Minding the Gap” was only a chronicle of three high school students’ skateboarding escapades, it would have been a gorgeous time capsule worth recommending on its own. Making a documentary this personal while thoughtfully balancing the lives and dreams of longtime friends is another herculean task entirely. But director Bing Liu is as adept at interweaving his, Keire’s and Zack’s stories as he is ducking under overhead pipes and skating around the tight corners of a Rockford, IL parking garage. A lyrical skateboard ballet when it wants to be and critical introspection amidst the tumult of family and friendship when it absolutely has to be, “Minding the Gap” is a film about what it means to move on. Watching a baby grow in real time or marking the passage of years by shrinking hairstyles, it maps the changes of young adulthood in ways that will feel achingly true to anyone who’s seen friends from their past slowly drift away. —SG

Texas-born Ethan Hawke brings his chops as actor, writer and musician to directing his third narrative feature “Blaze,” an elegantly structured, mythical true story about the life of the late country singer-songwriter Blaze Foley, combining a final concert and interview with Townes Van Zandt (Charlie Sexton) with the tale of his romance with writer-actress Sybil Rosen, who helped Hawke to adapt her memoir. Hawke banked that Arkansas musician Ben Dickey could play Foley, a hard-drinking man who was shot dead at age 39 in a friend’s living room. Dickey delivers a soulful, vulnerable performance as much through his singing of Foley’s songs (that have been covered by Merle Haggard, Willie Nelson, and the Kings of Leon) as his dialogue and romance with Rosen, who is played by a naturally sexy Alia Shawkat (“Search Party”). The supporting cast includes Josh Hamilton (unrecognizable as the loving dad in Sundance hit “Eighth Grade”), and 2018 Best Supporting Actor Oscar favorite Sam Rockwell (“Three Billboards Outside Ebbing, Missouri”). —AT

Before it becomes an ultra-creepy haunted house movie, “Hereditary” is an almost unbearable study of the grieving process. A family copes with traumatizing loss, screaming, crying and growing apart as the scariest aspect of their lives becomes the actual hardships of each passing day. Then something far more terrifying happens. “Hereditary” excels at permeating a convincing environment of despair with first-rate horror.  At its center, Annie (a terrifically unhinged Toni Collette) copes with a pair of deaths in the family by throwing herself into her creative practice. Her distracted husband (Gabriel Byrne) mostly keeps to himself, while her teenage son Peter (Alex Wolff) sulks on the sidelines, and his spooky younger sister Charlie (Milly Shaprio, who won a Tony for “Matilda” on Broadway) mostly lurks around saying very little. Eventually, the house becomes haunted, but the dire circumstances remain both terrifying and completely unpredictable. Collette’s paranoid, unhinged performance boldly swings for extreme emotions as the full conspiracy behind the haunting comes into view. The closing moments arrive with a relentless pileup of macabre circumstances, announcing the arrival of a new horror filmmaker willing to accept the genre’s time-honored credo that no good deeds go unpunished, and pure evil always steals the show. —EK

The Zellner brothers’ unexpected new film “Damsel” is a deadpan comedy that begins as a Robert Pattinson-charged surrealist Western and ends as a powerhouse Mia Wasikowsa feminist showcase. All of this is to say that “Damsel” is easily worth your time, even if some find its middle section a bit long and redundant. It’s hard to talk about the film since its delightful twists are so boldly interconnected with its overall message, but let’s just say the Zellner brothers have a lot on their minds when it comes to male heroes and the women they must always try and rescue from harm’s way. The acting is glorious, the jokes are blunt, and the cinematagraphy is mighty in “Damsel,” all you have to do is trust the Zellner brothers and they’re bound to outsmart and surprise you along the way. —ZS

Adapted from Richard Ford’s 1990 novel of the same name, Paul Dano’s directorial debut is a tender, gorgeous, and exquisitely understated drama about a family that loses its faith in itself. Set in an idyllic Montana town circa the early 1960s, and told from the perspective of a 14-year-old boy whose world is falling apart, “Wildlife” tells the all-American survival story of a rudderless man (Jake Gyllenhaal) leaving his distressed young wife (Carey Mulligan) to fend for herself. Working from the spare and beautifully observed script he co-wrote with Zoe Kazan — and directing with all the confidence you might expect from someone who’s spent the last two decades living the best film school imaginable — Dano crafts an unsparing drama that’s harsh and humane in equal measure. Mulligan is particularly brilliant; supported by a script that understands her character’s challenges and approaches them with rare empathy, her frayed performance resolves into a sad and immensely affecting portrait of reinvention. — DE

This Article is related to: Film and tagged Mandy, Sundance, The Tale, Wildlife