Directors take IndieWire behind the scenes of how they created the look of their new films in U.S. Dramatic Competition, NEXT, Premieres and Midnight sections of Sundance 2018. 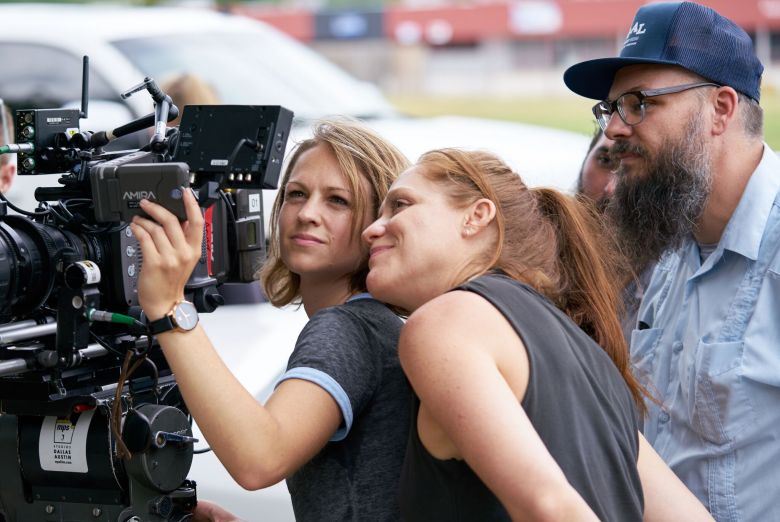 Director Augustine Frizzell on the set of “Never Goin’ Back”

IndieWire reached out to the filmmakers behind the feature-length narrative films premiering this week at Sundance to find out which cameras they used, and why they chose them. Here are their responses. Brad Anderson on the set of “Beirut”

Anderson: “We wanted an unmannered, loose, docu-style for film. There was a lot of handheld. We didn’t want multiple lens changes, which helped us work fast, too. We found the 40mm gave rich depth of field and dynamic movement without getting too crunchy.”

“The Catcher was a Spy” Lewin: “This is the first time I have had a DP use Leitz lenses on a movie. I had grown up with them taking still photos and wondered if I would notice the difference. Yes, I did. They delivered a beautiful depth and range of mid-tones which very much played into the look of that period that we wanted, and which was also part of the ongoing chemistry between photography, production design and costume.” Westmoreland: “I had been thinking about the right look for a Belle Epoque movie and looked to the work of Max Ophuls, particularly the “Earrings of Madame de…” It has so many incredibly beautiful traveling master shots and I thought this was a key for “Colette” – that she is always in motion, breaking through barriers in the frame – that Colette moves the camera. I had been friends with DP Giles Nuttgens for several years as he’s worked on my friend’s movies. I greatly admired his work in “Hell or High Water,” which has a number of spectacular long shots in it. We started talking about the look of the film and the world we wanted to create. We decided to use anamorphic lens, candlelight, and as many long dollies as we could. Technically, this presented a lot of challenges but the results were well worth it.” Marston: “Megachurches are profoundly uncinematic. And the late 1990s are profoundly challenging in terms of color scheme. DP Peter Flinckenberg and I worked closely with the production designer (Richard Sherman) and the costume designer (Ann Walters) to control the color palette and keep things from getting too saturated. Beyond that, it was question of finding a look that struck the right balance between real and stylized — or rather, cinematic. Especially helpful, in a few key scenes, was a series of swing-and-shift lenses designed by the DP. They change the focus plane so that it isn’t simply parallel to the film plane; and these specific lens have a unique locking system.” Zellners: “Working within the western genre, we wanted to embrace the tropes as needed without being bound to them. We never specify a particular place or year the story takes place, it’s simply the mythic Wild West. We wanted the color palette to be more vibrant in terms of the locations, costume, and production design, as opposed to a dusty sepia-tinged look. We liked the colors of the western melodramas of the ’50s and ’60s. With so many of the compositions and locations being landscape driven, shooting anamorphic was essential.” Don’t Worry, He Won’t Get Far On Foot

Blauvelt: “When Gus had originally came to me with this film, he talked a lot about being small and shooting it like a documentary with references like D.A. Pennabaker, the Maysles and the “Direct Cinema” (Canadian) filmmakers of the 50’s and 60’s.

We landed on the Alexa Mini shot in it’s 16mm mode which uses about half of the intended Super 35mm censor. it comes with some inherent noise due to the blow up from the smaller recording area, but this was something we liked and agreed that it enhanced our image and gave it texture. Another reason for falling back to this format was the lenses, We could then use the actual documentary type lenses (canon zooms) used by the greats and have the ability to zoom around within a scene as Gus wanted to do. We integrated both, our loser style with a more subdued and locked style as the emotion of any particular scene would call for. In the end I feel grateful to have had this experience with Gus and loved the freedom he pushes to make all of us on the set think about when we’re designing a scene.” Haley: “The KOWA primes we shot on are Japanese-made lenses from the 1960s. My DP, Eric Lin, informed me that they were quite popular in the 1970s. Movies like “The Godfather II” and “Rocky” shot on them, and more recently movies like “Arrival” used them as well. The look of the lenses are unique: sharp with a softer contrast and with the gentle falloff at the edges they brought an organic softness to shooting on a digital sensor. They gave us unique golden flares too that we didn’t see in the other lenses we tested. They were definitely the right tools for the intimate, character-driven film we were making.” Peretz: “I have been trying to use anamorphic lenses for the past few years because I love the way the light refracts through in low contrast and out-of-focus areas of the image. We decided to shoot the movie in full widescreen aspect, since we had a pretty pregnant actress. It helped us maintain the illusion along with other subterfuges. I could film medium closeup shots all the while letting the audience feel like it is a wider shot because of the negative space on the edges of frame.” Director Silas Howard on the set of “A Kid Like Jake”

Howard: “Honestly, we could have shot this with any camera. It’s more about how we used it to allow the actors to induce where the camera would be most organically placed.” Debra Granik on the set of “Leave No Trace”

Dir: Debra Granik
Camera: ARRI Alexa Mini (2 cameras for portions of the filming)
Lens: “We used two different sets of lenses to achieve two different feelings. Leica Summilux Primes were used for their warmth and richness for the woods at the beginning, and to a degree, the end sequences. For the city sequences, we used Vantage Ones — colder and sharper. A bit more clinical in feel to enhance the difference between these two very different worlds. The Vantage T1s are also very fast and were a bit of an insurance against running out of light.”

Granik: “The main goal that Michael McDonough, the DP, and I went in with was doing justice to the characters’ feelings for their environment. They had a love of these woods and a comfort in them. Both main characters are keen observers of their environment. We’d be shooting it in detail and attempting to show its resplendence. Michael aimed to express that warmth through a harmonious feeling to the look of the woods. For the city, which was not an easy environment for them to be in, the cinematography reflected the sharper edges of the built world.”

Fidell: “We wanted to make something that could be a studio comedy but that looked like ‘No Country For Old Men.’ Cinematographer Andrew Palermo did just that with these old anamorphic lenses.” Dir: Claire McCarthy
Camera: Arri Alexa XT Plus and Alexa Mini, which we used on Steadicam, MoVI, TechnoCrane, and handheld and Cable Cam rigs, among others. We had two cameras for the bulk of the shoot and then three cameras for some of the bigger scenes.
Lens: Denson and I had our heart set on shooting anamorphic right from the start for this movie. It just felt like the natural choice for a big screen cinematic epic. We shot on Hawk Anamorphic V-Plus, and V-Lites. We also had a set of vintage Hawk C-series lens.

McCarthy: “Cinematographer Denson Baker ACS NZCS, production designer Dave Warren, and I always talked about “Ophelia” being an anamorphic, big-screen epic that also allowed the audience moments of tenderness, intimacy and emotional intensity. It was so important for the audience to be intimately inside the world of this story, lead by Ophelia’s point of view. To achieve this, the world of the story and the relationships between the characters needed to be believably and naturalistically acted, and the way the camera captured these performances had to provide another layer of subtext and dramatic imperative to the story telling as it unfolded. We wanted texture: we wanted to experience the emotions of these characters up close and personal, and at other times be like a fly on the wall.” Jenkins: “My cinematographer, Christos Voudouris, and I were looking for a kind of poetic naturalism. The story is very human and we wanted the filmmaking to reflect that. We wanted it to feel intimate and lived in, but beautiful despite the mundane settings. Ford Wheeler, the production designer, made the couple’s home feel very lived-in and socioeconomically specific to these rent-stabilized NYC apartment dwellers. We mixed hand-held photography with static/tripod/dolly shots. We wanted to do scenes in single shots when we could. We were working with wonderful actors in intense scenes and we wanted to feel the tension of a sustained shot.” On the set of “Puzzle”

Turtletaub: “They gave the film a naturalistic feel. We were able to use natural light coming through the windows quite often to tell the time of day.”

Blythe Danner and Hilary Swank in “What They Had”

Chomko: “As the film was inspired by the gift that is memory, ‘like a memory’ was the mantra for the look of the film. Anamorphic felt like what the eye sees and gave us lots of room in the frame to capture family dynamics. The Hawk C-Series have pronounced focal aberrations and shifts, a beautiful bending at the corners that gave us a nostalgic, memory-like feel. We shot digital largely because of expense. Maximum shoot days was the priority. With a film so hinged on performance and a cast this terrific, it was most important to give them time to do their thing.”

Page 1 of 4
Continue Reading: Sundance 2018: Here Are the Cameras Used to Shoot This Year’s Narrative Films