Maggie Gyllenhaal single-handedly justifies this harrowing remake about a teacher who gets a little too invested in her best student. 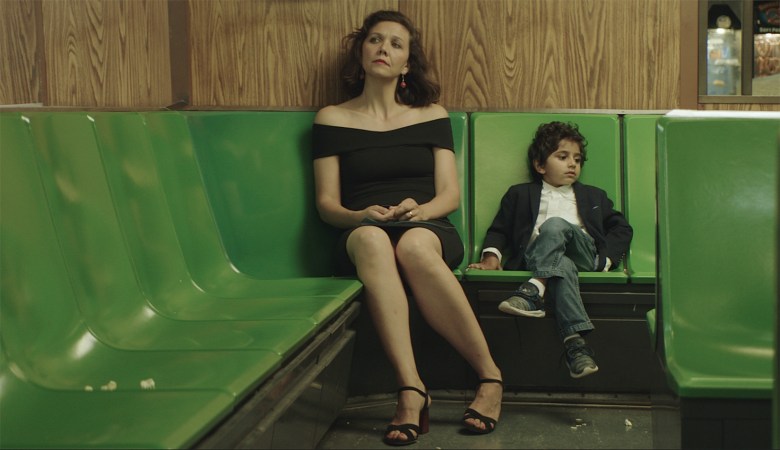 “Kung Fu” star David Carradine, the great warrior-philosopher of the 20th century, once said: “If you can’t be the poet, be the poem.” He makes it sound so easy — as though deferring your story to someone else wouldn’t feel like an act of defenestration — but then again, the man seldom met a problem he couldn’t high-kick into submission.

Lisa Spinelli (a captivating Maggie Gyllenhaal) has no such luck. The eponymous, fortysomething educator at the heart of Sara Colangelo’s “The Kindergarten Teacher,” Lisa has spent the last 20 years of her life teaching kids the alphabet and shepherding them to the next stop on the assembly line of America’s school system, and she’s finally beginning to succumb to the banality of it all.

You can see it in her posture as she sits in her classroom at the end of the day, her long body slumped against a chair built for a child. You can hear it in her voice, which has naturally become slow and serene after two decades of talking down to five-year-olds; it’s like a gust of summer wind, gentle and empty. Most of all, you can feel it in the nighttime poetry course she attends once a week in a dank university classroom somewhere along her commute back to Staten Island. There’s nothing inherently sad about adults trying to expand their horizons, especially when the instructor (Gael Garcia Bernal) runs the room with such contagious enthusiasm, but it’s hard to ignore the desperation in Lisa’s eyes. She needs this just a little bit too much. Alas, Lisa’s poetry is awful — well, “awful” isn’t the right word, but the truth of the matter is even worse: her poetry is mundane. And she knows it.

So when one of Lisa’s five-year-old students starts walking around her classroom in a trance and reciting some very beautiful lines of original verse, the teacher is instantly both rapt and rattled. Little Jimmy Roy (Parker Sevak) has never stood out to her before, but it doesn’t take long for Lisa to believe that she has a young Mozart on her hands. Jimmy’s family isn’t interested in nurturing the boy’s genius (his father is a real F. Murray Abraham about it, essentially telling Lisa that he doesn’t see a lot of money here), so Lisa decides to take matters into her own hands. Things only escalate from there, the butter sliding off the knife as she desperately tries to protect Jimmy’s remarkable gift before it’s snuffed out by a callous world that doesn’t know what to do with beautiful things. If Lisa can’t be the poet, she’ll have to be the poem.

The twists and turns that lie in store for poor Lisa are too cringe-worthy to reveal here, but it’s safe to say that anyone expecting something light and fluffy in the vein of last year’s “Gifted” are in for a rude surprise. An exceptionally acted but exceedingly faithful remake of Nadav Lapid’s 2014 Israeli film of the same name, “The Kindergarten Teacher” is a harrowing ride, packing the nail-biting moral panic of a great thriller into a tilted character study about a woman coming undone as she screams into the void. While Colangelo sorely lacks Lapid’s autobiographical insight and his formal virtuosity (the “Little Accidents” director opting for a straightforward approach that strips this version of the original’s roving and intimate camerawork), she understands every inch of Lisa’s  situation, and mines a fiercely brilliant turn from Maggie Gyllenhaal.

Gyllenhaal has been too good too often to label any one of her performances as her best, but she’s certainly never been better than she is here. In a remake that has little purpose beyond translating a good story for a global audience, Gyllenhaal almost single-handedly justifies the whole project, filling her character with the full courage of her convictions, and finding deep reservoirs of distressed humanity in all of her contradictions. You believe that Lisa is a great teacher and an unhinged lunatic. You believe that she’s sincere in her support of Jimmy’s poetry and that she’s selfishly using the little boy as an opportunity to transcend the banality of her own life (which comes with an average husband and two teenage kids who can smell their mother’s disappointment in herself). You believe that Jimmy’s poetry is wasted on our world and that Lisa is finding the wrong answers to the right questions.

Gyllenhaal always knows exactly where she is in each scene, Lisa transitioning from interested teacher to predatory madwoman so smoothly that it’s almost seamless, even though she fully earns every one of her many new lows. The ambiguities of her performance — the inexplicable cracks that she leaves in Lisa’s character — only make her all the more compelling; this isn’t a movie that’s interested in right and wrong, but rather in the maddening task of reconciling the two.

And while Gyllenhaal’s work should be enough to satisfy anyone wondering why this movie needed to be made twice, Colangelo makes fine use of the story’s new American context. Jimmy is at least half-Indian, and the optics of a white adult trying to co-opt the talents of a little brown boy are loaded enough to add an extra ounce of uncomfortable weight to every scene. Colangelo also seizes on our uniquely anti-intellectual culture with merciful restraint, the writer-director creating a world so crass that Jimmy’s poetry stands out like a flower growing through a chewed up Manhattan sidewalk. Just as importantly, the writer-director exhibits a firm grasp on what bad poetry feels like; how real but intangible the margin is between beauty and bullshit. Colangelo can intuit the difference. Lisa’s problem is that she can intuit it, too. It’s not that she doesn’t have talent, it’s that she knows that she doesn’t have talent. She sees so much poetry in the world; the tragedy is she’s powerless to capture it.

“The Kindergarten Teacher” premiered in the U.S. Dramatic Competition of the 2018 Sundance Film Festival. It is currently seeking distribution.

This Article is related to: Film and tagged Maggie Gyllenhaal, Reviews, Sundance, The Kindergarten Teacher