"Three BIllboards" beat out "The Big Sick," "Get Out," "Lady Bird," and "Mudbound" to win one of the most important Oscar precursors. 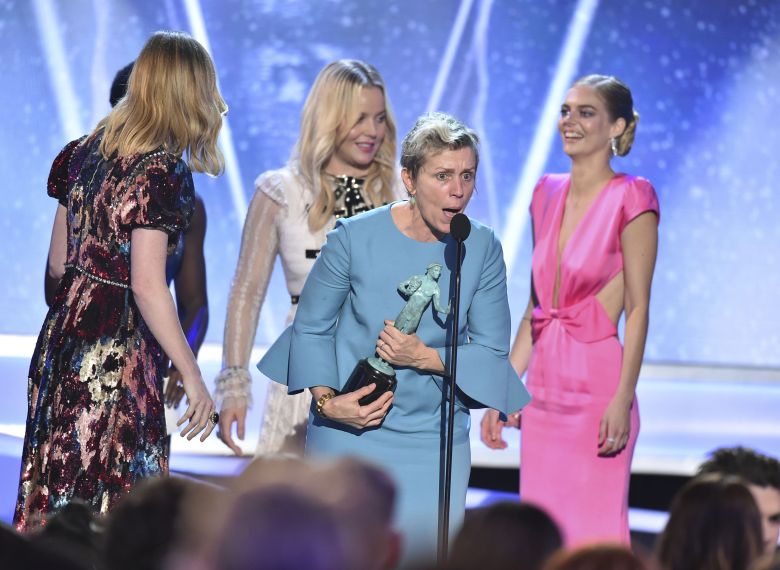 Frances McDormand and the cast of “Three Billboards Outside Ebbing, Missouri” accept the SAG award for Best Cast

“Three Billboards” beat out “The Big Sick,” “Get Out,” “Lady Bird,” and “Mudbound” to win one of the most important awards in the lead up to Tuesday’s Oscar nominations. Since SAG first started handing out the Best Cast award in 1995 it has become a big indicator for Oscar Best Picture nominations and winners. 21 of 22 winners have gone on to receive Oscar nominations for Best Picture and 11 won the Best Picture Academy Award.

The 24th Annual Screen Actors Guild Awards were presented Sunday, January 21, during a live ceremony at the Los Angeles Shrine Exposition Center. Two randomly selected panels of 2,500 members each choose the nominees for television and motion pictures. All active members of SAG-AFTRA in the United States – more than 121,000 members – receive voting information to select the outstanding performances of the year.

Check out the full list of this year’s SAG winners here.

This Article is related to: Awards and tagged SAG Awards