Charlize Theron is great in a Diablo Cody/Jason Reitman joint that's funnier than “Juno” and almost as ruthlessly honest as “Young Adult." 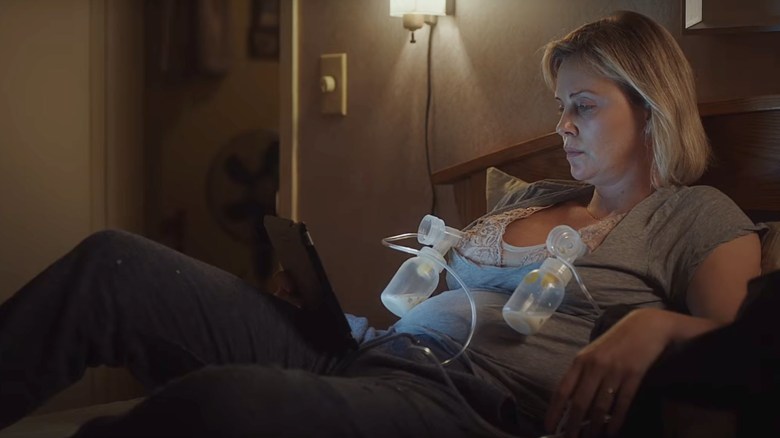 A very different kind of adult fairy tale (one that frequently doubles as a feature-length advertisement for tubal ligation), “Tully” is a fantasy of the highest order; it might look like an episode of “This Is Us,” but this story is every bit as magical as “The Shape of Water.” Think of it as Diablo Cody’s modern take on “Mary Poppins”: What it lacks in songs, it more than makes up for in sex scenes and Carly Rae Jepsen sing-alongs. Funnier than “Juno” and almost as ruthlessly honest as “Young Adult,” Cody’s third collaboration with director Jason Reitman is a razor-sharp movie about the trials of motherhood, and the clear and present danger of losing yourself once you start living for someone else.

We meet Marlo (a convincingly worn-out Charlize Theron) belly first, the very pregnant 40-year-old mother of two trundling down the staircase of her suburban house with a look on her fact that suggests the life growing in her stomach is the only life she has left. “I feel like an abandoned trash barge,” she admits to her affluent brother (Mark Duplass). “My body looks like a relief map for a war-torn country,” she tells someone a few months later when asked about the last time she had sex with her casually negligent husband (Ron Livingston, in a role that appropriately asks very little of him). This new baby was an accident, and not — it seems — a happy one.

In fairness, Marlo has her hands full already. Her eight-year-old daughter is just getting to that age when kids start defaulting to self-doubt, and her son — whom it’s suggested is somewhere on the autism spectrum — is about to get kicked out of kindergarten. The face she makes when the third child finally comes out is that of someone who’s been stop-lossed into another tour of duty. Forget the miracle of life and the joys of motherhood; baby Mia is just a hungry leech who never lets Marlo get a good night’s sleep.

While her husband plays videogames in bed and goes on work trips to Phoenix, Marlo sits awake and obsessively watches reruns of the magnificent Showtime reality series “Gigolos” (Cody once again displays a rare and beautiful gift for using pop culture to reveal her characters’ weak spots). Her nipples are leaking, her feet have grown three sizes since the first time she got pregnant, and her belly is… well, either Theron really committed to the role, or she’s wearing the most believable fat suit in film history.

And then Tully (Mackenzie Davis, as magnetic here as she was in 2016’s “Always Shine”) rings the doorbell: “I’m here to take care of you.” And just like that, everything changes. Marlo was reluctant to accept her brother’s offer to pay for a night nurse, but it only takes a few hours for her to realize how desperately she needed the help.

Tully is a dream come true. She’s kicky and familiar and she looks at Mia with a starry-eyed grin that Marlo might find troubling if she weren’t too exhausted to care. If there’s something vaguely demented about how much she enjoys helping out, that’s only because the film has so thoroughly disabused us of the idea that motherhood is supposed to be special. Marlo is reborn. As she puts it: “It’s like I can see color again.” It’s every mother’s fantasy: Getting her life back without giving one up in return. And while it’s super bougie to make a movie about the joys of hiring some new help, Davis single-handedly pulls “Tully” over that hump, transforming the title character into such a delightful manic pixie dream nurse that she always seems a bit unreal; not even the richest people in the world could buy this kind of care. Cost is never discussed — it’s more like Marlo found a genie in a bottle. Tully’s alien warmth and android-like way of thinking only grow weirder as things go on, and it isn’t long before we realize that the film might actually be flirting with the supernatural (no spoilers here, but the story is littered with all sorts of intriguing clues).

Tully’s alien warmth and android-like way of thinking only grow weirder as the film goes on, and while this is not a subtle film, there’s something graceful and true about how casually it explores the ways in which people now outsource certain parts of their lives. One of the smartest things about Cody’s script is how it balances the scales of Marlo’s life, never taking something off her plate without putting something on it in return. Mia might be taken care of, but now Marlo has to find a new school for her son. Tully might remind Marlo of the woman she used to be (and the abs she used to have), but tapping into the past has a way of resurfacing old regrets. Defining questions eventually emerge: Is the old Marlo dead, or is she just kind of dormant? Does motherhood require a woman to sacrifice herself at the altar of her children, or is keeping some part of herself a key to ensuring that her kids have someone to love?

“Tully” builds to a big twist that lands far too softly for the stakes that Cody and Reitman have established, but it’s a small price to pay for the pleasure of getting there. Theron and Davis are dynamite together, the actresses playing off each other like two sides of the same coin. With Marlo, Theron hilariously channels Imperator Furiosa’s rage into a familiar kind of resentment; with Tully, Davis becomes the best kind of foil, earning laughs through pure sincerity. “Tully” never pulls at your heartstrings quite as hard as it might, but there’s something beautiful about the way these two women both learn to love themselves, and in a way that also makes it easier for them to love each other.

“Tully” premiered at the 2018 Sundance Film Festival. It opens in theaters on April 20th.