Sebastian Silva's cringe comedy has a lot to stay about the microaggressions of black-white relationships in this perceptive character study. 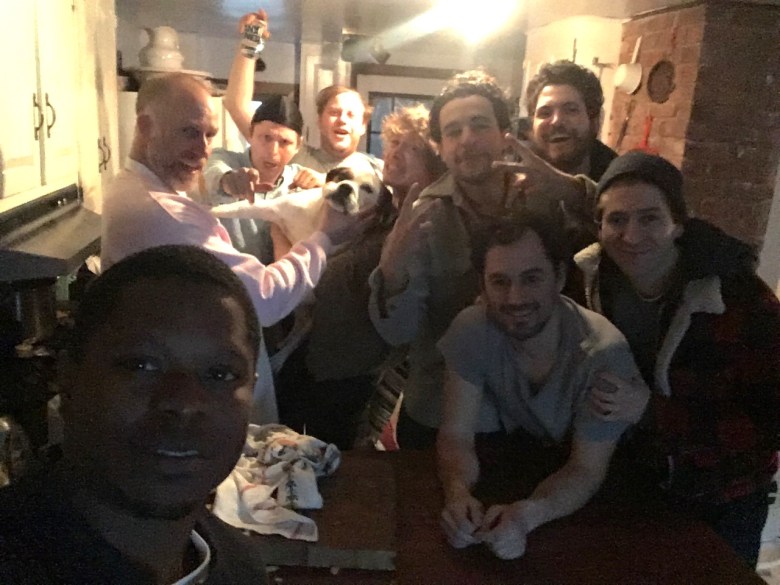 Few working filmmakers toy with expectations better than Sebastian Silva, whose movies weave and bob around familiar genre tropes, teasing certain outcomes without taking the most obvious route. From the dark domestic comedy of “The Maid” to the whimsical hipster antics of “Nasty Baby” that give way to a haunting criminal twist, the Chilean-born, America-based director excels at capturing uneasy social gatherings that devolve into chaos.

“Tyrel” is one of his less-adventurous offerings, but it still fits neatly into a career steeped in innovative explorations of human behavior, this one aided to a large degree by a first-rate Jason Mitchell performance that enriches the movie’s topical themes on race. The story of a cabin party in the Catskills, it finds Tyler (Mitchell) as the sole black man at an otherwise all-white weekend of drunken debauchery. While it shares some DNA with “Get Out,” it lacks the innovative genre twists. Instead, “Tyrel” establishes its intentions within the opening minutes, and more or less follows a straightforward trajectory in its trenchant exploration of race relations.

The movie begins on an icy road, where Tyler and John (Christopher Abbott) are pushing their car up the road. They’re intercepted by the rest of their rambunctious crew, including a rascally alpha male (Caleb Landry Jones, one step shy of psychopath territory), who accidentally mistakes Tyler’s name for “Tyrel” — and it only gets more cringe-inducing from there. In short order, the group has settled into a boozy evening, where Tyler grows increasingly uncomfortable with the micro-aggressions of party games that bring his outsider status to the fore.

Silva’s shaky-cam style grows increasingly erratic as the inebriated group enter risky territory, with the potential for confrontations spiking as soon as Tyler has a few too many shots. Mitchell, who solidified his acting bonafides with “Straight Outta Compton” and “Mudbound,” delivers his most naturalistic, grounded performance. Tyler’s passive, good-natured attitude continually runs up against the pack-animal qualities of the group; though his closest pal John does his part to keep his friend comfortable, racial tensions emerge over the course of two nights, with a standout moment finding the white men prancing around to R.E.M.’s “It’s the End of the World as We Know It” while Tyler retreats to the other room. It’s at once hilarious and discomfiting, a perceptive window into the ways that dissonant cultural reference points point to deeper conflicts.

“Tyrel” wanders through a series of vignettes, some more involving than others. The comedy quotient rises once a new member of the party (Michael Cera, a Silva regular) arrives and brings a more affable dynamic to the group that briefly helps put Tyler at ease; unlike the rest of the group, he’s actually willing to acknowledge the elephant in the room, donning a dark wet suit for an outdoors adventure and noting that Tyler’s no longer the only black person there. Other standout exchanges run dangerously close to micro-aggressions, including breakfast-table banter about Tyler’s tendency to put sugar on grits. Contemporary references abound, with a Trump piñata and a passing reference to the women’s march positioning “Tyrel” as a specific movie of the moment.

As Tyler continues to retreat from the scene, he makes a reckless decision that results in a prolonged interaction with a neighboring household rich with subtext. It doesn’t quite bring the movie to a satisfying conclusion, though “Tyrel” stands out for implying much about its scenario without forcing any of the characters to say it outright. Unlike “Get Out,” Silva doesn’t aim for a cathartic release, instead probing the nature of black-white relations through a series of nuanced exchanges with no evident solution. Once again, he offers up an approachable comedy of manners, only to conclude that the joke’s not that funny when the odd man out is the punchline.

“Tyrel” premiered in U.S. Competition at the 2018 Sundance Film Festival. It is currently seeking distribution.

This Article is related to: Film and tagged Jason Mitchell, Reviews, Sundance, Tyrel