Jeremiah Zagar's coming-of-age tale is a beautiful, evocative look at a young boy figuring out his place in the world. 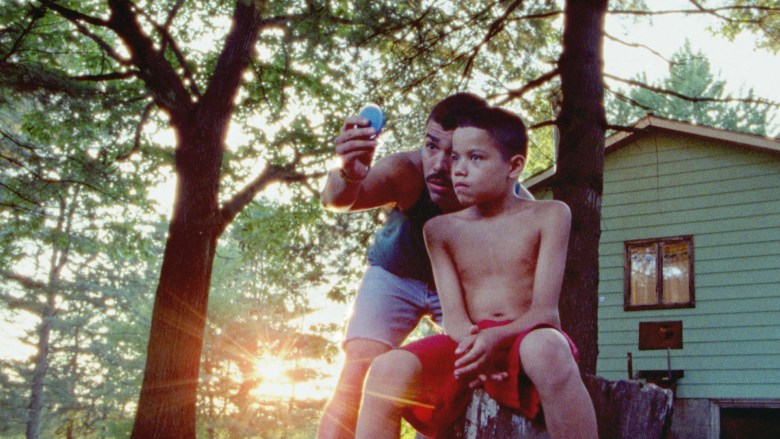 Raul Castillo and Evan Rosado in “We The Animals”

The surface plot of “We the Animals” is as simple as they come, and it’s not the source of its lyrical power. Above all else, director Jeremiah Zagar portrays the experiences of an adolescent boy coming to terms with his dysfunctional family and his emerging sexuality as a swirling cyclone of nostalgia, brutal arguments, and bittersweet pontifications. As Jonah, newcomer Evan Rosado exudes the confusing emotions of a child growing into his otherness, apart from the family unit that surrounds him. Each moment contributes to his developing perceptions of the world — telling glances and a ruminative voiceover transforms the movie into a poetic variation on the coming-of-age formula less fixated on exposition than the haunting beauty of growing up.

Adapted by Zagar and Dan Kitrosser from Justin Torres’ semi-biographical debut novel, “We the Animals” unfolds against the backdrop of woodsy upstate New York, where Jonah (Evan Rosado) roams a cramped household with his two older brothers Manny (Isiah Kristian) and Joel (Josiah Gabriel). At first, the boys are indistinguishable from one another, a pack-like trio of giddy children for whom every day is an adventure lorded over by their young mother (Sheila Vand, “A Girl Walks Home Alone at Night”) and overconfident father ((Raúl Castillo). The initial fragmentary scenes play like a lower-class variation on “The Tree of Life,” with a roving camera and throbbing score rich with the utopian idealism of a childhood devoid of conflict. Reality creeps in from the sidelines, popping the bubble of nostalgia at the most unexpected moments.

We learn the family’s backstory in bits and pieces: Jonah’s parents met as teenagers, when his Brooklyn mother was impregnated by his Puerto Rican father, and they’ve since receded to an isolated existence in decrepit surroundings while struggling to eke out an existence. The exuberance of playtime gives way to sudden darkness when the boys’ father, claiming their mother was injured by the dentist, suddenly vanishes for several days — leaving them to care for their battered mother. And just like that, Jonah finds himself attempting to comprehend a much more complicated place.

Taking cues from the book, Jonah speaks of his formative years in plural, but the collective voice gradually gives way to a singular experience. He is often a silent witness to the events around him, while his parents squabble and the kids theorize about the nature of their world. “Do you think dad will come back?” Jonah asks one sibling, and he’s met with a shrug: “He always comes back.” Yet no matter the confidence about the state of their rickety lives, Jonah seems to know that his mindset stands apart from the others’. Though some of the swooning romanticism of his memories draws heavily from Terrence Malick, “We the Animals” falls more in line with “Moonlight” for the way it evokes a growing awareness of being ostracized in an indifferent life, until the ecstatic potential for a new stage finally lands.

Zagar brings the same inspired collage of visuals to his polished narrative debut found in his personal documentary, “In a Dream,” itself a tender look at fragile minds (in that case, the filmmaker’s father, a painter grappling with mental instability). Without major plot twists, “We the Animals” often feels like the whispery outline for a grander cinematic achievement, but it drips with evocative details, from a terrifying swimming lesson in the middle of a dark stream to the voyeuristic experience of witnessing the parents engaged in intimacy from behind a shower curtain.

Jonah’s world comes together like stanzas in search of an elusive final picture, swinging between various emotional extremes. After the boys watch their hot-blooded father feud with his boss and get fired, they console him from the back of their grimy pickup, banging the sides of the vehicle in unison like the slow build-up in a ballad about their lives. “We the Animals” is loaded with these sort of intriguing moments, in which exposition is secondary to the struggles of living in the moment.

While Zagar doesn’t force the material into many surprising places, it’s a fully realized tapestry, owing much to the complex, layered score by Nick Zammuto that hums through nearly every scene, and frequent cutaways to hand-drawn animation based on the scrapbook that Jonah stores under his bed at night. These wild crayon doodles say far more about the intensity of the child’s psychological struggles than any words he could offer up, and the filmmakers help him along. Cinematographer Zak Mulligan’s camera floats alongside the family, often at eye level with the petite Jonah, and the gentle light evokes the ephemeral nature of his life.

As with “Moonlight,” Zagar taps into a cinematic toolbox for representing an outsider’s struggles, particularly as it pertains to a developing queerness within the confines of a world in which marginalization is baked into everyday life. However, in lieu of that movie’s decade-spanning timeline, “We the Animals” drifts through an intangible period of time that also feels — thanks to the crisp observations of its protagonist — utterly timeless. Its greatest visual motif finds all three boys holding hands over their ears in unison, content to exist in their insular world as long as possible. In every scene, “We the Animals” evokes not only the specificity of that world but the deep-seated challenges of escaping it.

“We the Animals” premiered in the NEXT section at the 2018 Sundance Film Festival. It is currently seeking U.S. distribution.

This Article is related to: Film and tagged Jeremiah Zagar, Reviews, Sundance, We the Animals