As nice as it is to see Gillian Anderson and David Duchovny together on screen, the mythology-heavy premiere is a narrative mess. 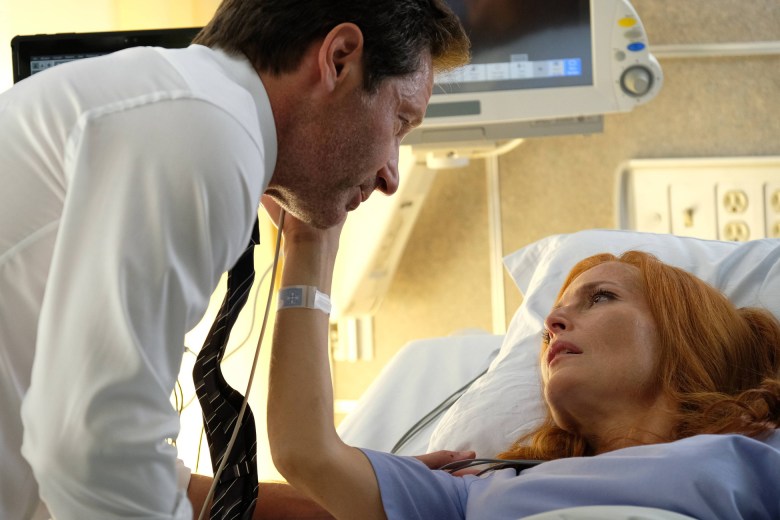 FBI Agents Mulder (David Duchovny) and Scully (Gillian Anderson), after many years away, returned to the basement to investigate the strange and unexplained. At the end of Season 10, a global epidemic called the Spartan Virus had begun to dismantle human civilization as we know it, with Scully scrambling to find a cure to save Mulder — only to find herself blinded by the light of an alien spaceship…

While at the end of “My Struggle II,” it’s Mulder who’s on the brink of death, “My Struggle III” flips the switch and resets the clock, as Scully is consumed by visions of the events of the previous episode. They may be predictions of what’s to come, or they might be writer/director Chris Carter attempting to retcon his way out of the narrative hole dug by Season 10.

Either way, Mulder’s healthy but Scully proceeds to go in and out of the hospital a whole bunch, receiving both good visitors (our old pal Jeffrey Spender, looking a lot better than the last time we saw him, not to mention Season 10’s Miller and Einstein) and bad visitors (a guy who attempts to smother her in her sleep, who Mulder basically flat-out murders with a scalpel).

Mulder makes some new friends, too: two new conspiracy wonks (played by AC Peterson and Barbara Hershey) who reveal that Cigarette Smoking Man’s ultimate goal is the extinction of the human race (via the aforementioned except not really aforementioned Spartan virus). The aliens aren’t interested in invading Earth anymore, by the way, as we’ve done such a good job of trashing it.

So: Conspiracies abound, Cigarette Smoking Man is scheming like crazy, and Mulder and Scully will return to investigating the weird next week — unaware that CSM has just unloaded a massive secret on Assistant Director Skinner: Scully’s son William, long ago given up for adoption, is actually CSM’s secret science baby. Everything that happened in “My Struggle II” basically didn’t happen… or, at least, it hasn’t happened yet. Scully has weird visions of her son and keeps collapsing. Mulder drives a fancy car real fast. Smoking Man is definitely Mulder and Spender’s father, and he also claims to be the father of Scully’s son through “science.” And “The X-Files” once again demonstrated its massive blind spot for the issue of consent, especially when it comes to Scully.

Sometimes, it seems like Chris Carter has absolutely no memory whatsoever of the previous 208 episodes of “The X-Files”… and then he throws us a curveball like resurrecting a question we never really wanted answered: What happened between Scully and Cigarette Smoking Man during their ill-fated road trip in the Season 7 episode “En Ami”?

Honestly, we were happy living in ignorant bliss on this one, because as recapped by the end of “My Struggle III,” there’s no ducking around it: Scully was violated without her knowledge by Cigarette Smoking Man in Season 7, to a degree that may well deserve the label of “rape.”

More than once over the course of the show’s run, Scully’s autonomy over her body has been stripped away: She was abducted multiple times (by both the government and many serial killers), had her ova harvested against her will, and apparently she’s now infused with full-on alien DNA; all of which speak to the fact that working on the X-Files is a pretty sucky gig, but especially for Scully.

This latest development might be a step too far; certainly we’re quite concerned with how this will all get wrapped up (or not at all) when “My Struggle IV,” the Season 11 finale, airs. It has always been a troubling aspect of the show, the fact that one of sci-fi TV’s most iconic female characters is often victimized in this way, but we also know that when it comes to “The X-Files,” especially when Chris Carter is in control, the actual truth is rarely a certain thing. In the meantime, onto what really matters…

Why yes, it’s another episode of “The X-Files” where Mulder and Scully maintain something of a platonic distance (though there is some nice bedside handholding), and it’s easy to feel disquieted by the questioning of  William’s paternity. But the fact that Mulder and Scully still believe that William is their mutual son is evidence that they have, in fact, been to Pound Town at least once (and that’s not the only proof, when you consider the many indicators we’ve enjoyed over the years, from dropped references in dialogue to the way they wouldn’t stop making out during the Season 9 finale).

It’s still not totally clear what the state of their relationship is, at least in relation to years past, but whatever is coming for them in Season 11, at least they’re starting things off on something resembling the same page, unified by their decades-old bond.

Let’s just take this opportunity to say that “The X-Files” has, in the past, shown itself to have an elegant touch with voice-over. That tradition does not carry over here, as “My Struggle III” is bogged down by Mulder’s meaningless ramblings, nearly to the point of self-parody. Perhaps the best quote of the night came during that quick flashback to the Spender family watching the (faked) moon landing: “That’s how heroes are made,” Cigarette Smoking Man grumbles to his family.

On some level, “My Struggle III” is a stronger season premiere than Season 10’s “My Struggle I.” It at least has some forward momentum, and there are fewer Powerpoint presentations. It’s still pretty talky, though, and some of these story decisions are almost painful. What exactly was Spender doing there, exactly? Did anyone but the most loyal of fans remember that Spender even existed? And why would Scully, a medical doctor, do something as dumb as get behind the wheel of a car while clearly ill? And we could go on.

So it could have been worse, but there really weren’t any redeeming aspects to the episode in the long run. William B. Davis still knows how to sell his laidback sense of evil, but while he might be the most iconic of all “X-Files” villains, the impact of Carl Gerhardt Busch Spender — or whatever his name might be — has basically fizzled out at this point.

What’s left behind is subpar storytelling with none of the show’s original charm; if Fox hadn’t supplied additional episodes to critics a few weeks ago, we’d be very, very worried about what Season 11 has in store. And even while future weeks promise case-file fun, “My Struggle III’s” most disturbing twist has us concerned that the ultimate endgame for the season will continue to damage this one-time critically acclaimed series’ legacy.