As Season 11 continues, the bond between Mulder and Scully gains new scope. 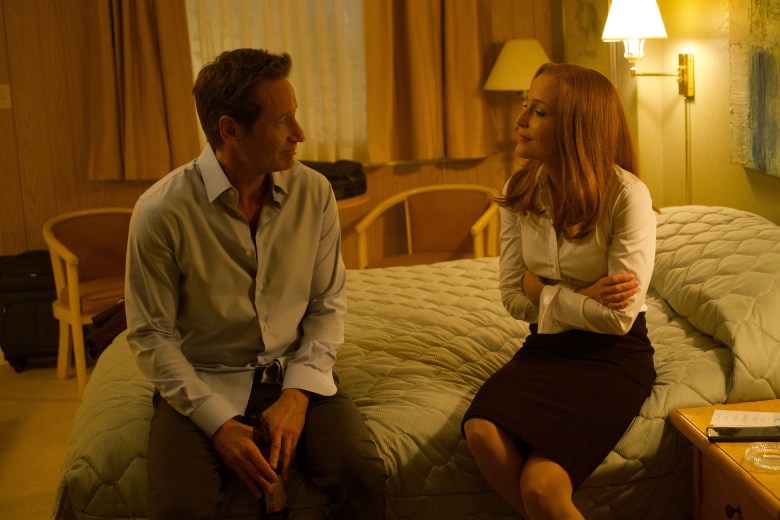 Mulder and Scully are FBI agents who investigate weird crimes. Sometimes those are stand-alone adventures. Also, they’ve been partners, off and on, professionally and personally, for 25 years now, though their exact relationship status has often been a bit nebulous.

After we see a young man spot his own double while driving drunk, it’s clear something weird is going on in a small rural Virginian community — confirmed by the fact that this is just one in a series of many other instances, where mysterious deaths are connected to the victims having seen their doubles beforehand. So it’s a good thing that Mulder and Scully, paranormal investigators, are on the case!

The partners figure out relatively quickly that at the core of the mystery are two very eccentric twins who like to play telepathic hangman — with the names they spell out correlating to deaths. Where do the twins get their powers? Who knows, but there’s a cool death where a sword-obsessed lawyer gets skewered by his own katana before eventually, the twins turn on each other, leading to their own demises.

Oh, and at some point Mulder and Scully do see their own doubles when the twins decide to target them, but all that really results from that is Mulder having a quick fistfight with his double self and Scully getting so spooked that she chooses to pay Mulder a nighttime visit, which results in the pair having an honest conversation about their relationship and then going to Pound Town. TWICE. Two crazy twins were terrorizing an entire community before eventually driving each other to their own deaths. Oh, and Mulder and Scully went to Pound Town. TWICE.

You’ll have to forgive us if we seem just a bit gleeful over this, because for years we’ve been waiting for affirmation of the fact that Mulder and Scully’s relationship exists outside of the definition of “platonic,” to the point of them actually, every once in a while, having sex. For 10 goddamn seasons, we’ve put up with forehead kisses and vague affirmations and lingering looks and yeah, there was some making out in the Season 9 finale and “I Want to Believe” but look, it’s been a long time coming, this day, and you will not take this moment away, you simply will not. We’re not even going to dwell on the fact that we never actually saw anything physical happen, because we now live in a world where an episode written by Chris Carter included undeniable evidence of the fact that Mulder and Scully have not only been to Pound Town before, but have been there multiple times.

It’s a good day, is what we’re saying. As long as we don’t think too hard about everything else that happened in the episode.

This is the second Carter-written episode of the season so far, and it’s certainly better than “My Struggle III.” But, to be honest, that’s not saying much, especially given the memories it evokes of the seventh season episode “Fight Club,” also written by Carter, which not only featured twins who are at the center of strange events but some equally sloppy plotting. If “The X-Files” wants to remind us of older episodes, episodes like “Fight Club” are definitely not the ones to reference. Ha, did you think we were done talking about Mulder and Scully’s relationship? Don’t be silly, because there’s another component that’s worth celebrating — the fact that Gillian Anderson and David Duchovny got a chance to play a real and sincere scene about their characters’ past, present, and future, which is theoretically even more intimate than the actual journey to Pound Town. (It does, of course, help that they did the scene while lying together in bed.)

“My sister’s a miserable slut and a damn cheater on top of it.”
— Chuckie

Sometimes, as a consumer of pop culture, you find yourself watching a storyline or character and realize that the writer of the episode got a real kick out of it — even if it leaves you completely cold. For this reviewer, at least, this was the case with the tale of Chuckie and Judy, two over-the-top weirdoes whose innate weirdness was just off-putting. (Though shout-out to Karin Konoval, making her third guest starring appearance on the series, for crazy levels of commitment.)

Let’s also use this section to say that every reference to the word “dookie” (dooky? really not sure about the spelling there) was relatively silly. And not in a good way. “You still got it going on… still got some scoot in your boot.”
— Mulder

Even outside their scene in bed together, Mulder and Scully were pretty cute in this episode, and Duchovny definitely had fun with this line.

Narrative-wise, this case file was replete with clunky dialogue, bad exposition, and just an overall lack of sense, capped off by a truly anti-climatic climax that was resolved far too easily. So, there’s no way to grade this episode any higher, unfortunately.

However, the character work done at least gives us hope for future episodes, as it seems to indicate that Carter and the writers are thinking about Mulder and Scully not just as crime-solving avatars, but as people with decades of history between them. We’ve said it many times — Mulder and Scully are “The X-Files” — and watching them united in the struggle to find the truth is what’s kept their journey compelling all this time.