Her majesties arrive at their HBO throne in style, and bring their friends along for the ride. 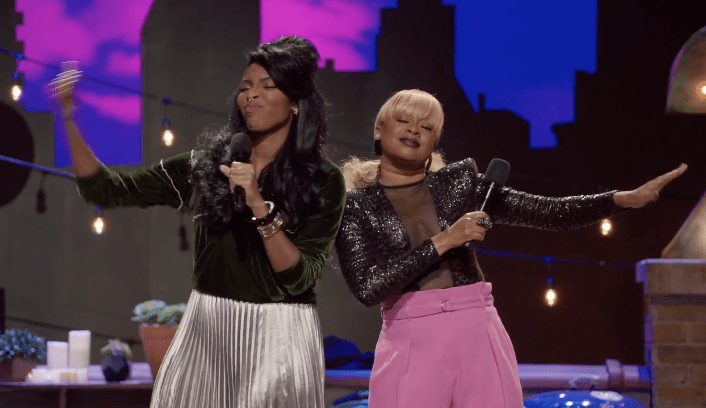 Comedians work well in pairs: Abbott and Costello, Laurel and Hardy, Nichols and May. But it’s high time for a new dynamic duo, and they call themselves “2 Dope Queens.” Out of a smash hit podcast and monthly live show in Brooklyn, stand-up comedians Jessica Williams and Phoebe Robinson fashioned their very own four-part HBO series, which will air every Friday in February. If HBO needs to use Black History Month as a reason to program these fierce talents, we’re not complaining. But after a few hours with these two, you might find yourself wishing every month was Black History Month.

Both accomplished performers in their own right, the rise of Robinson and Williams is one of the more heartening comedy stories of the last few years. Their success is a testament to that certain extra something that comes from working with someone who just gets you, and that spirit of collaboration runs through all four nights of “2 Dope Queens” (of which this reviewer has seen the first two).

Williams first broke out as a correspondent on “The Daily Show” (she landed the gig straight out of college), while Robinson was cutting her teeth in New York comedy clubs. Williams quickly embraced her newfound notoriety, using it to raise Robinson’s profile as well — Robinson has since scored roles on high-caliber TV shows such as “I Love Dick” and “Search Party.” Now, from atop their HBO-bedazzled thrones, the queens are shining their newly minted spotlight on other talented comedians, many of whom don’t look like everyone else on TV.

Though the guest list is to die for, Williams and Robinson open and close each show. They parade across their rustic rooftop set at Brooklyn’s historic remodeled Kings Theatre, their complementary but distinct outfits each more fabulous than the last. Their conversational bits range in topic from “things they make their white boyfriends do that feel like reparations” to calling Jon Stewart a DILF (Stewart: “Dad I’d Like to Friend on Facebook?”). In a standout segment from Episode 2, Sarah Jessica Parker surprises the crowd, and the queens allow her to ask them anything she wants about black girl hair. As Parker fumbles over her words to a tittering crowd, Williams quickly shuts it down: “This is a safe space!”

Dubbing themselves the “Cocoa Khaleesis,” the queens skate circles around the fine lines that white comedians must tiptoe. Even Stuart seems to recognize a passing of the buck is in order, and his “Lox Khaleesi” joke doesn’t entirely land. An earnest riff it may be, but Jewish jokes are so last decade, and we’re ready for a whole new squad. Guest comedians on “2 Dope Queens” include Michelle Buteau, Aparna Nancherla, Baron Vaughn, Rhea Butcher, and Sheng Wang. (There’d be nary a straight white guy in the bunch if Mark Normand hadn’t snuck in there for being so darn funny).

The Cocoa Khaleesis are not just the face of comedy’s future, they are actively ushering in fresh faces and voices to round out the roster. More than their black hair humor, or infinite uses of “yaaas” that don’t reek of cringeworthy appropriation, the most progressive thing about “2 Dope Queens” may be their willingness to reach down the ladder and give other people a leg up. That’s not something many early-career comedians would do, and displays a rare double-dip of confidence and humility that speaks volumes more than each fabulous hairdo. With “2 Dope Queens,” Williams and Robinson have found a formula that works very well for them — and it just might work out for everyone else, too.