Here's a primer on the documentary shorts nominees, including two clear frontrunners. 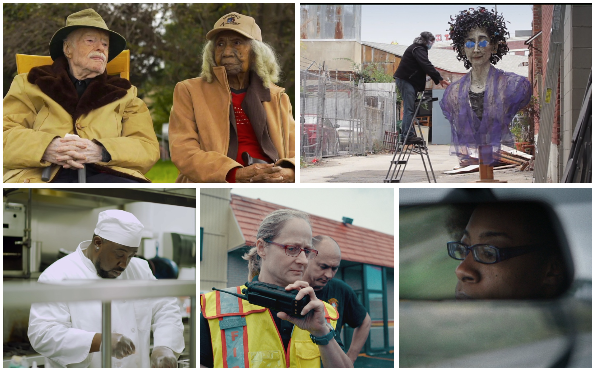 The Oscar-nominated documentary shorts program has always been a chance for the Academy to highlight urgent social issues, and this year is no different. Sticking close to home during a year of political unease, all five of the nominated films hail from the United States, and clearly the country has plenty to examine. Ranging in topic from police brutality to mental illness to the opioid crisis, each nominee uses human stories as an entry point. Clocking in between 30 and 40 minutes, this crop of films offers a deeper dive beneath the headlines — revealing the personal toll a crisis exacts from real people.

All three groups of Oscar nominated shorts — live-action, animated, and documentary — will be released by ShortsHD in theaters across the country next week, when more adventurous cinephiles can discover the joys of short films. For reasons of length, the documentary shorts will play in two parts. Here is a look at the longest group of contenders, including two standouts with similar titles but vastly different stories, “Traffic Stop” and “Heaven Is a Traffic Jam on the 405.” In 2015, an African-American math teacher named Breaion King was stopped for a minor traffic violation in Austin, Texas, and what should have been a routine ticket turned into a violent arrest. Using footage of the encounter as captured by police dash cams, filmmaker Kate Davis cuts the tension of the harrowing encounter with slices of King’s rich and varied life. As an interview subject, King is warm and joyful; in her classroom, she is engaging and supportive; in dance class, she is lithe and emotive. The images don’t compute with the dash cam footage, which becomes more and more painful to watch as this bright and lively woman comes further into focus.

The interviews with King are also a relief — her presence is a sign that she survived. She hardly needs to mention Trayvon Martin, but when she does, he and every other black life lost to senseless brutality come to mind. As the fuzzy dash cam video unfolds, the arrival of other officers seems to put King slightly at ease. She’s moved to a different squad car, away from her arresting officer, and engages him in a frank discussion on police racism. Davis, whose feature length documentary “Southern Comfort” took home the Grand Jury Prize at Sundance in 2001, has created a deeply moving portrait of a woman whose life is turned upside down by callous police brutality and racism. With its urgent topic and known filmmaker, this is one of two likely frontrunners in the category. Frank Stiefel’s fascinating portrait of the artist Mindy Alper has many layers, almost as many as the wire spirals of Alper’s whimsical and haunting sculptures. Alper works in paper mache, a material she has used since childhood, to create giant faces and complex shapes in a style formed by a lifetime of drawings. But Alper is no ordinary interview subject; her speech is stilted and slow, and she wrings her hands compulsively as she details a lifelong battle with depression, mental illness, and a childhood devoid of physical touch — a jarring juxtaposition to her articulate self-awareness and extreme emotional clarity. Art is survival for Alper, not merely as a creative way to channel her suffering, but as her only means of communication during a 10-year period without speech.

Visual artists make for dynamic documentary subjects, because their work naturally adds a colorfully vivid window into their minds. Stiefel peppers Alper’s narration with her dynamic drawings, which are filled with images of the menacing fathers and distant mothers that make up a picture of Alper’s childhood. A particularly moving sketch of her beloved psychiatrist shows a figure spewing a stream of nails as the therapist blocks them with an endless supply of tiny hearts. The movie finishes with an exhibition of Alper’s work, a high note in an amazingly creative (and hard-won) life. The cleverest title of the bunch, Elaine McMillion Sheldon has crafted an expansive portrait of a West Virginia town engulfed by the opioid epidemic, told through three indefatigable women on the frontline. Fire Chief Jan Rader spends her days reviving addicts from overdoses; Judge Patricia Keller’s drug court program rehabilitates with humor and tough love; and Necia Freeman of Brown Bag Ministry feeds and counsels women selling their bodies for drugs. Rader’s spirit never seems to flag as she bounces around from one emergency call to the next, pragmatic and optimistic in equal doses. As she sees it, if she saves the same person 50 times, that’s 50 chances the person has at entering recovery. Keller is similarly compelling, running her court like a real life Judge Judy, doling out support and reprimands where appropriate.

Sheldon’s choice to follow three women pays off in a big way, keeping the viewer engaged and presenting a fuller picture of the former industrial town. Rader’s friendship with a former addict who now does outreach work is a particular high point, as well as a drug court graduation ceremony. When a new call comes in, however, Rader is back to business as usual. “Heroin(e)” is a compelling portrait of an otherwise forgotten Appalachian town and the women holding it together. Thomas Lennon chronicles the opening of a world-class French restaurant staffed almost entirely by formerly incarcerated people, as well as a manager with a checkered past of his own. While certainly a worthwhile story, the film feels as hastily made as the kitchen’s mouthwatering offerings, though the result is not quite as tasty. “Knife Skills” opens just six weeks before the opening of Edwins, a restaurant in Cleveland, Ohio. The staff, most of whom are very recently out of prison, have a short time to learn the arcane vocabulary of fine French cuisine as well as the skills to make each dish on the menu. The film never states why the timeline is so tight, and it seems unnecessarily cruel to give the trainees such an impossible task.

The film follows Edwins founder Brandon Chrostowski, whose past trouble with the law gives him a personal connection to his mission. Driven to the point of obsession, Chrostowski expects the best from his employees and isn’t afraid to let one go at the slightest sign of trouble. An oddly edited scene shows an emotional Chrostowski speaking to his infant son, but it feels out of place. Lennon could have better spent his time focusing on the trainees, whose brief storylines feel short-lived. Framing the film with a time-crunched restaurant opening is also misleading; the day comes and goes without a hitch and the film loses steam afterwards. “Knife Skills” sheds light on a fascinating story; unfortunately, the film just doesn’t match its subject’s ingenuity. It would be difficult to wring too many thrills out of a nonagenarian romance, but one would hope to find a little bit of humor out of the endeavor. Not so for Laura Checkoway’s dry elder romance, which takes a straightforward approach to the story of America’s oldest interracial newlyweds. The titular Edith and Eddie met while playing the lottery, and after splitting their $5,000 earnings, married at the ripe ages of 95 and 96. “Edith+Eddie” opens with images of them sleeping side by side, dressing for the day, and painstakingly inserting their dentures one at a time. Their days consist of sitting by a pond and watching the birds fly North; their conversations are full of whatever the other can hear.

In a sad turn, Edith’s two estranged daughters attempt to separate the couple out of fear that Eddie’s medical care will diminish their mother’s estate. Due to her dementia, the court appoints a guardian to make decisions for Edith, a stranger who is firmly on the side of the daughters. One week after they separate Edith and Eddie, Eddie ends up in the hospital. “Edith+Eddie” boasts executive producers Steve James and Cher, which will no doubt garner some interest, but this basic treatment plays like an expanded news item.

The 2018 Oscar Nominated Short Films will be in select theaters on February 9. Find out where you can see them right here.