An overview of the top programming in the network's history, from "Archer" to "Sons of Anarchy" and so much more in between. 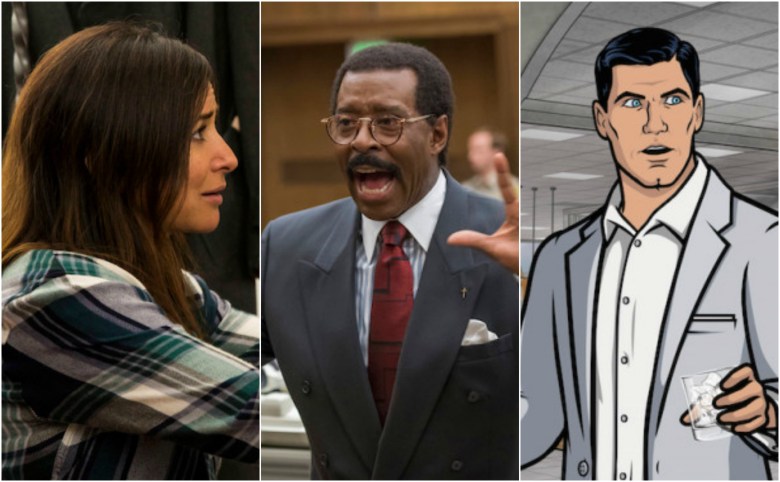 In a TV world where some services offer up brand new TV shows every week, it’s all the more impressive when a network can maintain quality with only a handful of new series each calendar year. One such channel? FX, which for the better part of the last 20 years, has been a place that’s helped push the boundaries of what’s allowed and what’s successful on TV.

Particularly since 2002 (the year when two of the shows in this collection premiered), FX has become a force for compelling dramas, surprising comedies, and a few shows that proudly defy falling into either category. Not all their efforts have been critical or audience successes (for every “The Shield,” there’s bound to be an “Anger Management”), but there’s a certain consistency to the FX banner that’s come without having a particular house style.

So which of these shows are most worthy of praise? By the nature of the TV world, most of the shows on this list of our top 25 are recent picks, series that have been part of the network’s pushes to preserve its place in the prestige TV hierarchy. For the majority of this decade, it’s been doing just fine.

For consistency’s sake, we considered shows that began as FX originals, even if they eventually hopped over to a new home on FXX. Some are anthologies (a trend which FX was at the forefront of) and one features a grand total of zero actual on-camera humans.

With brand new seasons of a few of these shows right around the corner, here are our picks for the most significant shows in the network’s history. Based on the Scandinavian series “Broen,” “The Bridge” offered a premise almost too perfect for an American adaptation: A judge known for his anti-immigration stance is found dead on the bridge connecting Mexico and the United States. With half of his body in one jurisdiction and the other half in another, detectives from both countries are called in to work the case and, wouldn’t you know it, turns out the killer is slaying citizens on both sides of… the bridge. Diane Kruger and Demián Bichir deliver outstanding performances in challenging roles, and even when the garish details overwhelmed any of the series’ topical allegories, “The Bridge” offered a striking, unforgettable vision of a socio-political conflict that rages on to this day. A perfect marriage between network and talent, “American Horror Story” came along at exactly the right time. Ryan Murphy wanted to push the limits of basic cable with an anthology series full of enough sex and violence to scare any network Standards and Practices department. Luckily, FX was willing to go along for the ride, making each season feel like a bold new adventure into the unknown. Viewers never knew what they’d see each week, meaning they were never safe from Murphy’s demented visions, and it’s spawned a show intent on topping itself no matter the premise, characters, or content. “American Horror Story” launched more than a franchise; it created a monster that could live for decades. Depending on your level of pop culture obsession, “The Comedians” was either pretty damn funny or side-splittingly hilarious. Billy Crystal and Josh Gad’s self-satirizing comedy made meta references to both comics’ best and worst material (the number of “1600 Penn” references are surprising on their own), all while building a world just one degree removed from the real one. The two comedians were making a show together on-screen and off; they were working with real celebrity guests like Mel Brooks; they were poking fun at their own movies and fake studio heads; sketches made for the show within the show made their way into the show outside the show. All that’s to say almost every element of “The Comedians” worked on multiple levels, but most importantly, Crystal and Gad turned their “Billy” and “Josh” characters into empathetic human beings without ever getting so sensitive they’d turn down a chance to mock their public personas. It was an ambitious series that needed everyone to be 100 percent on board for it to work, and each member of the team was all in; “The Comedians” was short-lived, but fully-realized. Denis Leary might not have been an obvious choice for the lead (and co-creator) of a dramedy about firefighters working in a post-9/11 world. But after “Rescue Me” premiered, it was hard to imagine anyone else in the role of Tommy Gavin, heroic when things were on fire and more than ordinary otherwise. This rough and tumble series delivered a lot of drama with a light touch, and was a key factor in FX establishing itself as a place for original series, in an era when basic cable was seen as somewhat suspect. “The League” was not a show you watched for a realistic experience of the inner workings of a fantasy football league, especially considering that approximately .000001 percent of all the roster moves on that show actually made sense. But like “Friends” being more of a show with identifiable types than a realistic exploration of New York life in the mid ’90s, “The League” managed to craft a solid central cast of characters that people could transpose over their own group of friends. With a rotating ensemble that occasionally brought in NFL players and budding comedy legends (if all this show did was help propel Jason Mantzoukas to prolific status, it would have been a rousing success), “The League” helped create an entire lexicon for armies of fantasy players across the country. The show never had aims beyond the narrow niche it catered to, but it was a dependable version of what it was for the better part of seven seasons. The premise couldn’t have been stranger: Ryan (Elijah Wood) survives a drug-fueled suicide attempt, only to find his neighbor’s dog Wilfred has manifested as a man (Jason Gann) in a dog suit. Sure, a man in a dog costume, with all the dog jokes that come with it, is one of the goofier conceits on TV. But even though the show outlived its initial premise of trying to figure out the reality of Wilfred — was he just a dog, imaginary, or something more? — it evolved into one of the darker shows on TV. Its psychological explorations perhaps weren’t the most subtle, but in the end it settled on a narrative that could be seen as both satisfying and yet troubling. “Wilfred” existed in an in-between space — just like the dog that can’t decide if it wants to go out the door or stay in — and that uncertainty somehow worked. Perhaps FX’s most populist hit, “Sons of Anarchy” was ridiculously beloved, but perhaps for good reason. The Kurt Sutter drama kept viewers hooked on each insane twist over the course of its seven seasons. This series about biker gangs in central California cultivated its share of addicts, especially thanks to its cast. We’d watch Katey Sagal do anything, and “Sons of Anarchy” gave her plenty to do even while it pushed the boundaries of episodic storytelling. The way in which Ryan Murphy has embraced and transformed the concept of the anthology series has been fascinating to witness over the last few years. It’s also led to the creation of some truly great television. We’ve only gotten one season so far of “Feud,” but watching Jessica Lange and Susan Sarandon battle it out as rival movie stars was an undeniable treat, especially given the lush period details on display. Long before “American Horror Story” put a man in a sinister latex bondage suit, this early Ryan Murphy effort showed his potential for really creepy imagery and psycho-sexual horror. The depictions of graphic, partial plastic surgeries were disturbing enough, even before the show delved into the private (and rather unbalanced) lives of plastic surgeons Dr. McNamara and Dr. Troy (Dylan Walsh and Julian McMahon). At the time, the show stood apart with its long-arc serialized storytelling, which kept viewers coming back for more. It also introduced one of the most iconically frightening serial killers to ever grace the small screen. Sophisticated, sexy, scary, and sick, “Nip/Tuck” was much like the plastic surgery that it featured, addictive in its allure.

Page 1 of 3
Continue Reading: The 25 Best FX Series of All Time, Ranked

This Article is related to: Television and tagged Atlanta, FX, The Americans