The third installment in the ongoing TV anthology has slightly different tastes than its predecessors, but is more unnerving than ever. 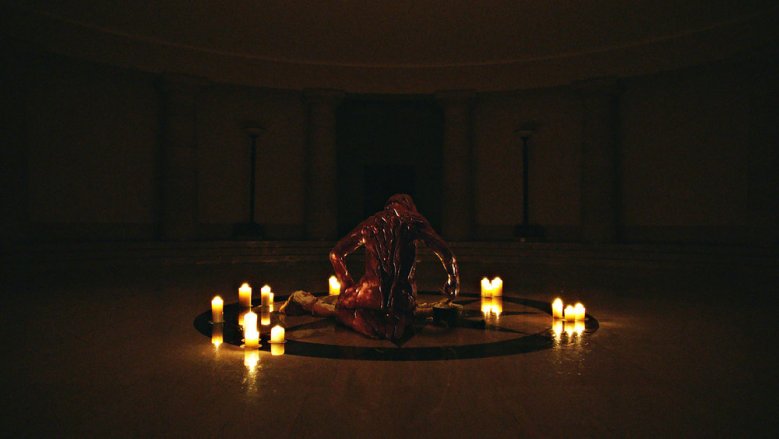 Like some of its episodic horror ancestors, “Channel Zero” is scariest when its horrors are delivered as matters of fact. When the latest season of the Syfy anthology series “Butcher’s Block” unveils a mysterious staircase in the middle of a city park, it’s another skin-tingling layer to the story not because the show bathes it in mystery or presents it as a grand pronouncement of Something Weird. It simply exists, a fragment of fantasy in a real world and the clearest indication that the people who inhabit it are struggling to know the difference.

Those main characters in this “Butcher’s Block” season are Alice (Olivia Luccardi) and Zoe (Holland Roden), two sisters each trying to forge different lives for themselves away from the shadow of a troubled family past. Shortly after they move into a new house managed by an enigmatic landlady (Krisha Fairchild), the town’s history begins to supplant their personal traumas. Before long, Zoe’s past of drug abuse and schizophrenia and Alice’s attempts to avoid the same become an unconscious pathway into their new city’s most troubling secret. (Hint: it involves meat.)

Joseph Peach (Rutger Hauer), the impresario behind the city’s meatpacking boom half a century prior, might be the insidious villain connected to these staircases, a specter promising an idyllic enclave where Zoe and Alice’s problems might melt away. As the two sisters wrestle with whether to brave the real world or follow the promise of a blissful altered state, otherworldly forces begin to infiltrate the area around Butcher’s Block and bring the horror to them.

“Channel Zero” has found some of its greatest stories from the ways that trauma can manifest itself in jarring physical forms. (Consider the ominous glowing birth orb from “No-End House.”) “Butcher’s Block” is no exception, as both Olivia and Zoe spar with their personal mental health issues through the guise of some creatures with various-sized heads. But even when these figures from another plane start lurking in the shadows of Butcher’s Block, it’s not so much their physical form that’s deeply troubling. It’s the way their actions (with real-world analogs) show that human behavior can be just as monstrous. Even as these wild forces threaten the central characters’ tenuous grip on reality, none of them feel so alien that they don’t feel relevant. They’re abstractions, to be sure, but close enough to the familiar that it’s understandable that Alice and Zoe would find them hypnotic. The ghostly figures in this movie are dapper, well-to-do, aspirational socialites; even before characters sit around a dinner table, watching these individuals fight through their own urges and desires forms a twisted banquet all its own.

Though the time we see the sisters in a state of contentment is fairly short, when events get set into motion that lead to bloody threats of bodily harm, “Butcher’s Block” is fairly unrelenting. Even when its characters emerge on the other side of a particular sequence seemingly unscathed and healed, the show is quick to remind audiences that their scars are just as psychological as they are physical.

That’s where another fantastic “Channel Zero” ensemble takes center stage. As Zoe, Roden somehow goes through the entire season as if a heavy chain is holding her back just as much as her own misgivings about her mental future. Luccardi gives Alice has a sense of optimism that gets curdled over time, enough to take her beyond a simple task to save her sister. Hauer is the ideal Joseph Peach, an old-guard patriarch who’s alluring enough to draw in curious inter-reality travelers but meticulous enough to be menacing once they’re under his spell. And Krisha Fairchild picks right back up where she left off from her devastating turn in “Krisha,” giving some depth to a character that has to make a quick impression.

Brandon Ross might be the biggest surprise of the season’s opening half, skillfully navigating the role of small-town police officer Luke Vanczyk. Alice and Zoe’s stories take center stage (and rightfully so), but away from the immediate danger of the staircases, Scott gives a knowing window into what’s happening in the “outside world.” And Luke’s personal journey, complete with some unexpected speedbumps, still carries a similar weight of family expectations and perseverance in the face of the inexplicable that Alice and Zoe look at elsewhere. Aside from the fact that these staircases are presented in an eerie, knowing way, “Butcher’s Block” builds off of that fantasy/reality divide rather than just calling attention to it. Where “No-End House” used that grey area in a way that kept audiences questioning everything in the moment, “Butcher’s Block” also adds that layer of wanting to believe what’s in front of your face as a means for being “cured.”

If there’s one area where the season seems muddled, it’s in navigating these heady metaphorical ideas without the conciseness of previous “Channel Zero” seasons. The show’s been able to juggle multiple storylines with strong central characters, even when they weren’t all in one location. Individually, the strands of “Butcher’s Block” are compelling in their own way, but the separation between them makes for a slightly bumpier story that occasionally gets stretched a tad thin.

Part of that comes from the warehouse of ideas lingering just below the “Butcher’s Block” surface: there are themes of environmental awareness, police-community relations, mental health, family drama, gender roles, the erosion of once-thriving American cities, even the crippling nature of student debt. That allegorical wealth sometimes works against the show’s best interests, especially when “Butcher’s Block” takes its biggest storytelling swings.

But tacking off the previous season, “Butcher’s Block” also gets plenty of mileage from the persistent contrast between light and dark. When one character finally broaches the area between reality and this other realm, there’s a lush, vibrant counterpart to the murky terrors of one of TV’s spookiest playgrounds. The bright, pristine place-settings in a faraway dining room is a tempting escape from a city with missing children and a potential murderer on the loose. The true trick of “Channel Zero” is that those two worlds are somehow equally frightening.