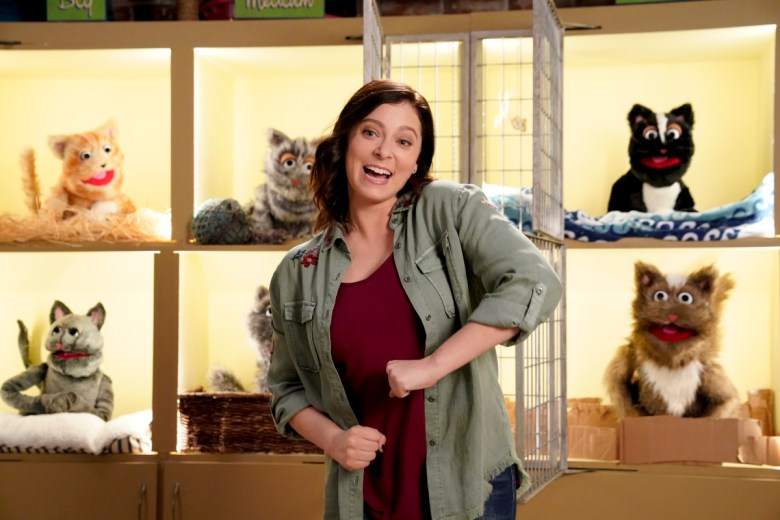 If there’s one thing we’ve learned about “Crazy Ex-Girlfriend’s” Rebecca Bunch (Rachel Bloom), it’s that she doesn’t do anything halfway. On Friday’s episode, she accepted the fact that she can no longer be with Nathaniel (Scott Michael Foster) and is therefore destined to be a bachelorette forever. In typical fashion, she doesn’t just accept this idea, she takes it to another level. In the episode’s first song, she details her new identity as a crazy cat lady and goes to the Lonely Lady Cat Store to acquire her new companions.

IndieWire spoke to co-creators Rachel Bloom and Aline Brosh McKenna, and composer Adam Schlesinger about the number, “A Buttload of Cats.”

“The idea was to dramatize Rebecca’s decision to turn away from pursuing love,” said Brosh McKenna. “As someone who’s spent her life pursuing various romantic obsessions, Rebecca doesn’t have a lot of ideas about how exactly to spend her time and so she relies on some things she maybe kinda heard about? Knitting? Cats? Cats!”

Bloom added, “The original song title was something Jack [Dolgen] suggested. I think it was like, ‘Fuck It, I’ll Just Get Cats.’ When Adam Schlesinger and I started brainstorming the song and decided on cat puppets being the chorus, everything was shaped around that. We wrote up the lyrics, Adam wrote the rest of the song, and I wrote up the script.”

You may think that a song with such a purr-fect title like “A Buttload of Cats” was always meant to be, but there were a couple other names considered.

Brosh McKenna said, “For many, many days, Rachel walked around the writers’ offices asking whether people liked ‘buttload’ or ‘crapton.’” Bloom chimed in, “Very true. It’s mainly because ‘fuckton’ is really what the song should be called. That’s why there’s an explicit version of it on my personal YouTube.”

Take a look at “Buttload of Cats” and then continue reading for more about how the number was put together:

“It was kind of Randy Newman meets Fiona Apple,” said Bloom. “To quote Adam, ‘Started as Fiona (at first it was minor key), but then ended up being more Randy.’ This is one of my favorite melodies, chords, and arrangements that Adam has done on the show.”

Schlesinger confirmed, “We went through a few versions musically, and it was a little tough to figure out what the attitude was. Was she pissed? Was she resigned? Was she happy? The final version seemed to strike the right balance.”

Kathryn “Kat” Burns was able to live up to her name by putting together some feline choreography, complete with scratching and adorable paw swipes. It somehow worked out that it was performed by Rebecca and her squad: Paula (Donna Lynne-Champlin), Heather (Vella Lovell), and Valencia (Gabrielle Ruiz).

“There is something bewitching about that dance. Everyone on the show is obsessed with it,” said Brosh McKenna. “Also, it’s always great to see a Gurl Group dance!”

Bloom said, “The general note was to be playful and cat-like. When we got to the cat store, Kat directed me to get funkier with the movement to fit the song.”

“I recall that the first person I emailed about this was Ben Siemon [who played Brody],” said Bloom. “In addition to playing ‘Grocery clerk with half an eyelid,’ he also has extensive experience in puppet work and connections in the puppet world. The puppets were made by James Hayes, and all the puppeteers knew either James or Ben. The puppet world is small.”

A Caterwaul of Sound “We had some very hep cats on the session,” said Schlesinger about providing voices for the mewling cat puppets. “Me, Steven Gold, and Nina Zeitlin who has done a lot a great vocals for the show (including the classic ‘Romantic Moments.’)”

As for how many meows were too many or too little to write into the lyrics, Bloom said, “The meows came in when it felt right. There wasn’t too much debate there.”

Although the song may make it seem that cat ownership is a lonely endeavor, the show upends that stereotype. After all, there are plenty of cat lovers out there — including those with more than one cat — so it’s all about finding feline-friendly folks who share that passion.

“That’s why the entire bridge of the song is dedicated to questioning the stereotype,” Bloom acknowledged. “It’s also why the two ‘lonely’ cat ladies fall in love in the end.”

In fact, many of the cast and crew on “Crazy Ex-Girlfriend” are proud cat owners and are doing just fine.

“There are many, chief among them Gabrielle Ruiz and Kat Burns. Check their instas, their cats are everywhere,” said Brosh McKenna.

Bloom said, “Off the top of my head, the cat owners are Gabrielle, Vella, Kat, our AD Katie Carrol, and our writers assistant Hailey. For the record, former cat owners are Aline and Adam Schlesinger. I would have honestly liked to have a cat if my dumb husband weren’t allergic.”

“Crazy Ex-Girlfriend” airs Fridays at 8 p.m. ET on The CW.

This Article is related to: Television and tagged Cats, Crazy Ex-Girlfriend, Rachel Bloom