The humble artist explains why he never thought he'd release his music, what drives his writing, and that he's not quitting acting (so stop asking). 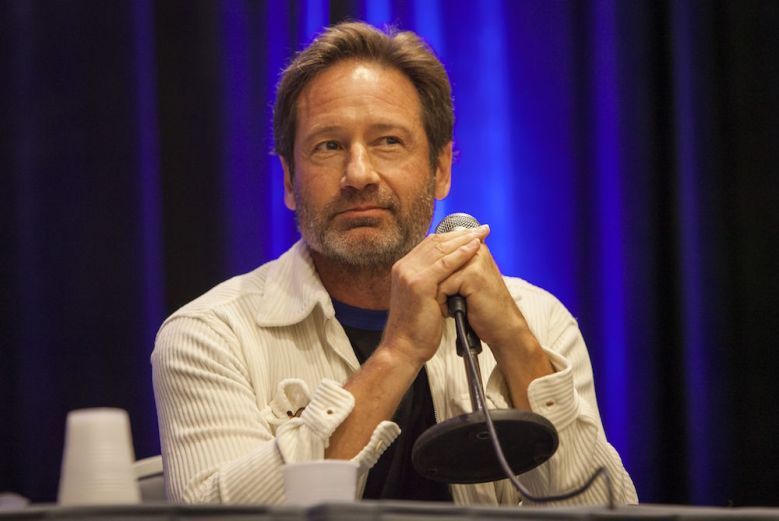 Odds are you clicked on this article because you like “The X-Files,” David Duchovny, or both. Even if you discovered Mr. Duchovny long after his breakout Fox drama — say, in “Californication” or “Aquarius” — the actor is inextricably linked to his revived TV series and his character on it, Fox Mulder.

And that’s OK. You know it, I know it, and Duchovny knows it; just like he knows a lot of people will come to his concerts because “they want to see this actor that they know.”

In the last three years, Duchovny has released two novels and two albums, one of which (“Every Third Thought”) just landed on February 9. He’s got another book, “Miss Subways,” out on May 1, and his second novel, “Bucky F*cking Dent,” is currently being developed into a feature film — written and directed by Duchovny.

“I might be making it this summer,” he said. “I might be directing it. I have financing today, I might not have it tomorrow — you know how the independent [film] world goes.”

If realized, Duchovny said it would be “a dream come true.” He’s actually been working on it for years, and the 2016 novel began as a script he couldn’t sell.

“I tried to make it for years as a screenplay,” he said. “I got fed up, and I was like, ‘But I love that story,’ and I had written ‘Holy Cow’ [his first novel]. I was like, ‘Shit, maybe it should be a novel.’ So I wrote it as a novel, and now, ironically, there’s interest in the screenplay.”

Duchovny said the same thing is happening to “Miss Subways”: He wrote it as a screenplay, couldn’t get it made, and turned it into a novel instead. Now there’s interest in a movie version. A lot of that revived buzz has to be credited to Duchovny’s revived character: Fox Mulder returned to “The X-Files” after more than 13 years off the air, and the show made quite an impact. Not only is it back again for another, longer “event season,” but many more long-dead broadcast series have since returned to television (including “Will & Grace,” “Full House,” “Gilmore Girls,” and the upcoming “Roseanne” revival).

“Yeah, I probably wouldn’t have been able to put an album out if I wasn’t in the position I’m in, but that doesn’t mean the music sucks,” Duchovny said. “There’s plenty of great bands that can put out a shitty album.”

But with his expanded vision as an artist comes unexpected challenges within the industry. After expanding into music and novels, Duchovny said the most common reaction he faces from agents, executives, and other showbiz types is confusion.

“It’s like, ‘Now we don’t know how to brand you. This is a problem,'” Duchovny said. “It’s like, ‘It’d be better if you [had just one profession]. Now, people, they don’t want to hire you as an actor [because] they don’t understand what you’re doing, because you’re making music or you’re writing a novel. Are you not serious about acting? Do you want to act anymore?'”

Duchovny said he gets that last question a lot, but quitting acting never crossed his mind. Not only does he still take acting very seriously, but he needs it to help draw attention to his other work.

“I’m not with a big label, musically, and people don’t really read that much anymore,” he said. “What I use, in terms of branding, it’s like I can use the fact that ‘The X-Files’ is on to talk about these other things that wouldn’t be talked about otherwise. It’s just people don’t really talk that much about books. I’m not a major touring musical act. I appreciate the fact that ‘X-Files’ or whatever else I do as an actor can also draw attention to this other stuff.” David Duchovny in concert circa 2017

And, despite all this output, Duchovny said he’s a man of “few ideas.” A lot of his work blends together as he explores what interests him.

“There are things that deeply interest me, and I’m going to address them in whatever form that I’m working in,” he said. “I’ve got a song called ‘Stranger and the Sacred Heart.’ I’ve got a chapter in my next novel called Stranger and the Sacred Heart. They’re ideas that spark me and I have no problem repeating myself that way, because one has nothing to do with the other — except for the idea, really.”

Each endeavor offers a different reward. Duchovny said music is an “area of free play” because he’s so new to the game. He doesn’t feel like he has to be exceptional like he does in acting — and writing. Always an avid reader and writer (Duchovny got his first “story by” credit on “The X-Files” in 1995 and wrote his first of three scripts in 1999), he feels “more pressure there to kind of compete with writers that have gone before.” But unlike music or acting, what drew him to the written word was “complete creative control.”

“I grew up artistically as an actor, and that’s completely reliant and collaborative. It’s reliant on other people’s words and collaborative on the editor. You have no control,” he said. “For me, [writing] was like, ‘Okay, this is just going to be all of what I can do in this area. I’m not going to hide behind anybody else. I’m not going to rely on anybody else.’ To me, that’s what writing was. I could do it sitting alone in my house.”

Though Duchovny considers music to be “almost the opposite,” describing it as “totally collaborative” because he “needs a lot of help,” it almost turned out the same way: He never thought he’d release his songs to the public, and even when he was pushed to do so, he thought about releasing them as a charity album — as protection from critics.

“[Like] ‘You can shit on me all you want, but know you’re also shitting on charity,'” he said of his thought process. “Then I was like, ‘You know what? This is just music. I can give whatever I want to charity, but I don’t have to hide behind that as the reason behind the music.'”

If he keeps at all his artistic pursuits, soon he’ll be able to build an entire project by himself: write the novel, pen the script, direct the movie, act in it, and use his own music for the soundtrack.

“I love that,” Duchovny said. After all, they’re all driving each other.

“The X-Files” returns February 28 at 8 p.m. ET. “Every Third Thought” is available via Spotify and iTunes now. “Miss Subways” hits bookstores May 1.

This Article is related to: Television and tagged Bucky Fucking Dent, David Duchovny, The X-Files