There's far more to this show's intergalactic team, but this is a rare well-rounded, feel-good animated sci-fi comedy. 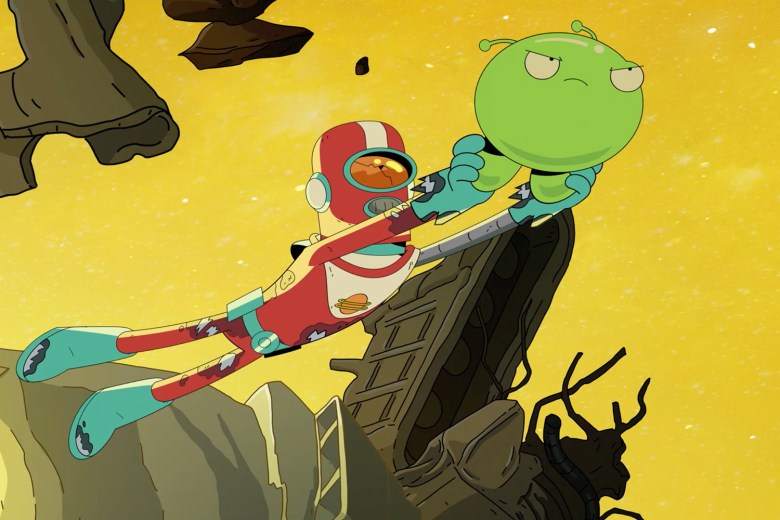 At some point, within minutes after the last episode of “Final Space” airs on TBS, some enterprising YouTuber will take every Mooncake moment from Season 1 and edit them all into one supercut (and then minutes after that, someone else will make a ten-hour long version because that’s how the internet works now). That endless loop of the tiny squishy alien’s little anxious squeals and joyful reassurances will be a true and pure gift. Mooncake is here to become both a beloved green savior and the TV world’s new best friend. Prepare yourselves accordingly.

Good thing there’s still a pretty wonderful show happening in between each “Chookity.” For starters, “Final Space” — based off the previous web work of creator and animator Olan Rogers — has a human protagonist named Gary. Serving out the final days of a five-year prison sentence on board the Galaxy One spacecraft, Gary is on the verge of being a broken man: He’s fashioned friends and partners out of inanimate objects and lives in constant pursuit of the ship’s impossibly guarded cookie cabinet.

Mere weeks from finishing out his term, a series of crashes and unexpected visitors give Gary a newfound sense of purpose. With the addition of floating green guardian Mooncake and the bounty hunter Avocato (Coty Holloway), those new compatriots form an intergalactic team, with Gary’s more manic nature edging closer to the human he was back on earth.

In a bit of immediate expectation subversion, each episode flashes forward to Gary floating through space at an unspecified future date with his oxygen tank running low, minutes away from doom. Those repeated openings provide a truly thoughtful counterbalance to Gary’s crazy sci-fi antics everywhere else. Starting off each adventure with an all-is-lost fate coming some point down the line is a gutsy opening gambit, even when Gary’s frenzied externalized internal monologue undercuts the somber solo piano playing in the background. For as goofy as Gary can be (and he often is), that seesaw of poignancy and outrageousness from its main character is both a point in favor of the show’s complexity and something that the show never quite fully figures out how to balance. Luckily, even if Gary isn’t your favorite main character, there are more than enough winsome elements to this series that should hook viewers of all ages and interests.

Credit “Final Space” with this: the early episodes run through plot at full throttle. One particular showdown with enigmatic villain Lord Commander, that most shows would likely string out for an entire season, happens far sooner than you would expect and plays out in a surprising way that doesn’t feel like a typical Season 1 move.

It’s part of how “Final Space” is incredibly economical with how it parses out the makeup of this crew. Lifetime friendships are forged over the span of minutes, and it’s a testament to the show’s sincere approach to most of its story that those team-ups still seem earned. These are clearly defined characters without having to lean on cheap shortcuts or lazy jokes.

Most of that also comes from the strong supporting cast on display here. As Quinn, the Infinity Guard officer who led Gary to space in more ways than one, Tika Sumpter brings a confidence to her work and to deflecting Gary’s off-kilter advances that make Quinn an independent top-of-her-field pro in her own right. Fred Armisen is a blast as KVN, the robot companion on the Galaxy One who happily floats over the line between enthusiastic and fatally willing to help. And voice-acting vet Tom Kenny adds the perfect slightly-above-monotone touch to HUE, the Galaxy One’s AI system. (Between Kenny’s part here and Alan Tudyk’s invaluable Dangerboat on “The Tick,” it’s been a good month for sentient sci-fi transportation.) The show’s true wild card is Lord Commander (David Tennant), an unexpected mix of high-pitched whining and full-throated menace. Sure, there’s some voice manipulation to go along with it, but it’s remarkable how unrecognizable and legitimately frightening Tennant is when Lord Commander goes into full rage mode. The fact that those moments are almost always preceded by the less glamorous business of being a universally feared telekinetic mind villain is another point in the show’s favor.

It’s very easy for “wholesome” to get leveled as a backhanded compliment, and “Final Space” doesn’t necessarily qualify for that description, either. But it’s closer to honest, good-natured sci-fi animated comedy as any of its obvious animated sci-fi peers. Most of that comes from Mooncake’s cuddly nature, but it certainly doesn’t stop there. Avocato’s relentless pursuit of his son Little Cato (Steven Yeun) broaches an interesting tension between personal, family, and intergalactic duty that makes this more than a gimmicky approach to an adventure-of-the-week setup.

There’s a certain appeal to seeing that as scattershot as Gary can be sometimes, he doesn’t always have to be the hero. In many cases, he can’t be. Avocado and KVN and Quinn each get a chance to work together as a team and grab the triumphant moment for the good of the group. Gary’s more an accidental friend than an accidental warrior, which paves the way for the full team to be the main focus.

It’s no coincidence that near the end of the pilot, Mooncake tucks Gary in for the night. For as crazy and cartoonish violent the show can get sometimes, “Final Space” always comes back to a feeling of comfort. It’s not the comfort of a forced false sense of security, it’s the idea that the show has the coordinates to a clear trajectory, one that just happens to toss in an occasional Escher-box mind trap or an alien gladiator arena that would make “Attack of the Clones” or “Thor: Ragnarok” blush.

The animation of the show itself builds on some of the established touchstones of its sci-fi forebears, whether real-life or drawn. There are the familiar ship schematics and the cool glimmering sheen in all the futuristic interiors. But occasionally, when the crew lands on distant planets, the show gets to indulge a rich, luscious rainbow of eye-popping space delights. (Even if that doesn’t hook you, the gorgeous rendering of light-speed travel wormholes sure will.) That fusion of the simple and the vibrant is what makes the show worth tuning in for. “Final Space” is working from a template, but it’s adding colors that make these journeys well worth taking.

This Article is related to: Television and tagged Final Space, TBS, TV Reviews