The actress' appearance on Monday night's episode of Colbert was easily the best "Late Show" moment of the year. 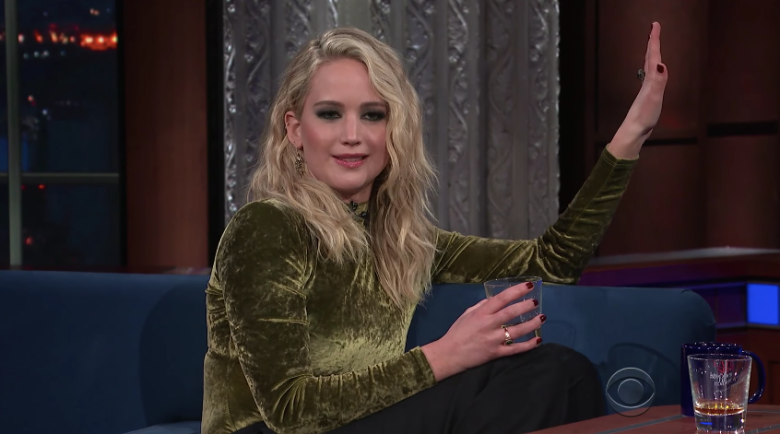 May we all be so lucky to wake up to a clip of Jennifer Lawrence on a late night talk show from the night before. In her Monday night appearance on “The Late Show with Stephen Colbert,” the actress recapped her stint filling in with Colbert’s timeslot rival Jimmy Kimmel — and that was only about the 43rd greatest thing about the 15 combined interview minutes. This is quite the rich tapestry.

In the span of a quarter hour, Lawrence also talks about being outsmarted by college students, her vacation alter ego, her love of “Spy Kids,” and the extent to which she would make her dog…happy. This is really a lot to take in.

The two big takeaways? Lawrence describing her attempts to flirt with Larry David at Amy Schumer’s recent wedding and her justified rage simmering just beneath the surface as she describes Harvey Weinstein.

Interviews like this don’t happen if the guest isn’t willing to be completely filter-free, but credit Colbert for realizing where this was heading long before it got there. That bottle of Cuban rum he pulls out from his secret stage compartment certainly didn’t seem like a pre-planned gimmick (even if Lawrence hadn’t told the audience so). Colbert usually only busts out the booze for Lawrence’s one-time co-star Robert De Niro, but this one was worth cracking open the good stuff.

Once Lawrence gets in storytelling mode, she is the Georgia O’Keeffe of late night. Watch how she brings it all to life.

The craziest part is that things got even better when the show came back from commercial break. (That fake goofy smile she gives the audience right off the top!) Lawrence runs through the movie’s talking points at lightning speed and Colbert’s reaction is just wonderful.

After the two start trading ballerina skills and she does an impression of her niece, time runs out or they might have bumped musical guest MGMT and just kept talking. Colbert apologizes at the end, but this seems like the kind of end-of-the-press-tour catharsis that would have happened, alcohol or not.

“Red Sparrow” is out in theaters this Friday, where Lawrence’s character presumably has never seen “Curb Your Enthusiasm.”