Vikander reveals to Vogue that Moore was her savior after a man said something inappropriate during filming. 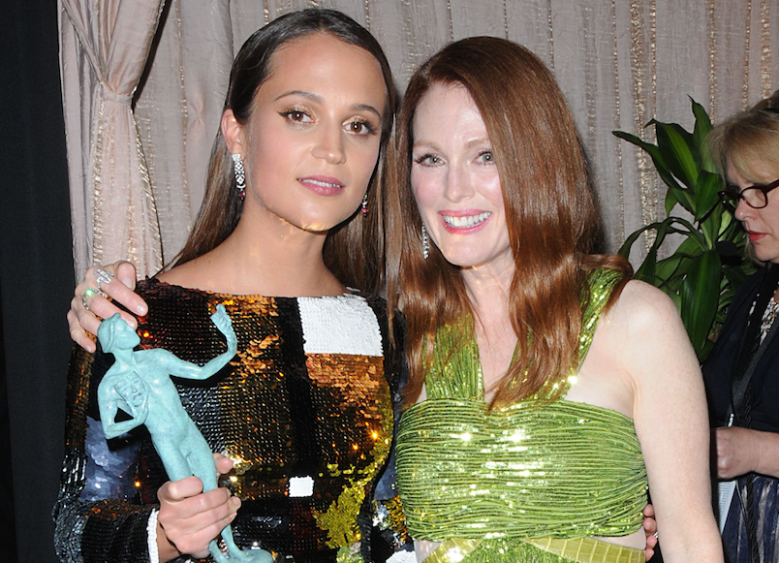 Julianne Moore isn’t just the MVP when the cameras are rolling. Alicia Vikander reveals in her new Vogue cover story that Moore came to her defense after a man made a crude joke towards Vikander on the set of the 2014 fantasy film “Seventh Son.” The Sergei Bodrov-directed movie featured both Moore and Vikander in supporting roles. After a man said something inappropriate to Vikander, Moore jumped in and yelled at him.

“I was really embarrassed, and I would have just laughed it off,” Vikander says. “But Julianne turned to him and said, ‘If you ever do that again, I’m walking out of here and I’m not coming back.’ She was just, like, ‘Don’t you f—ing say that again.’ It showed me that she had the power. And that meant so much to me.”

Vikander did not name the man who made the joke, nor did she say what the joke actually was. The Oscar winner has been vocal about treating women as equals on film sets and in the workplace, lending her voice to the Time’s Up campaign and signing an open letter against sex abuse in Sweden along with nearly 600 other Swedish actresses. Her involvement with Time’s Up has created new relationships with some of Hollywood’s most outspoken actresses.

“It was such a community that came together,” Vikander tells Vogue about Time’s Up. “I got on the phone with Natalie [Portman], whom I’d never met, and Reese [Witherspoon]. Suddenly I felt like I made a lot of new friends…One thing that really got to me in their initial email was the fact that — because women are not as well represented in all industries — we often have to fight for jobs. The competition is so tough that instead of getting to know each other and working together, we learned at an early age to compete for that single spot.”

Vikander can next be seen on the big screen as Lara Croft in the “Tomb Raider” reboot, in theaters nationwide March 16. Head over to Vogue for more from Vikander’s cover story.