IndieWire has first look images from the set of "Too Old to Die Young" below, but here's why the director of "Drive" is making even more available online in advance. 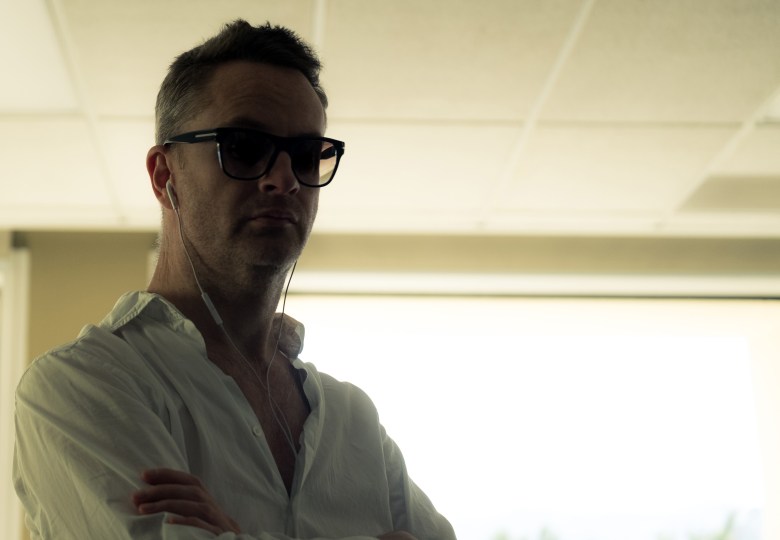 The “Drive” and “Neon Demon” director said this just a day before heading off on location to continue shooting his upcoming Amazon series “Too Old to Die Young,” which is currently described as tracking an ensemble’s “existential journeys from being killers to becoming samurais in the city of angels.”

While that description may sound vague, Refn has no interest in secrecy when it comes to his set. The show has been in production since last November, largely in Los Angeles, and on a semi-regular basis, Refn and his team have not only been actively posting on-set photos to Instagram, but also setting up a Mevo camera on set to capture the production process in all its raw glory.

This has led to videos where members of the cast interact with Refn on camera, as well as just extended videos which capture the process of shots being blocked and captured. Anyone who’s ever spent some time on a film set can tell you that these moments can be equal amounts exciting and tedious, and it’s something Refn is actively choosing to expose for his audience.

What seems to intrigue Refn about live-streaming set life is what it reflects about the state of filmmaking today. “I think that as our entertainment industry is falling apart, it’s very interesting how the idea of something that used to be very secretive, is now the complete opposite,” he said. “And that, it’s like exhibitionism, which is what creativity essentially is. But not just living the result be the peak or the main focus but the actual process. Because entertainment is almost like now co-existing with us rather being moments in our life, evolution.”

Refn said that as far back as 2009’s “Valhalla Rising,” he would have liked to expose his filmmaking process, “but it wasn’t possible back then just because of technology. But, now that we can, it’s becoming very interesting. So I’ve had it for many years, there just hadn’t been the right system to take advantage of it.”

The cast of “Too Old to Die Young” includes Miles Teller, Jena Malone, Billy Baldwin, John Hawkes, Nell Tiger Free, Babs Olusanmokun, Callie Hernandez, and Cristina Rodlo, many of whom appear in the videos posted to Facebook. How did Refn tell his cast just how much he wanted to make public on set? “I just said, ‘There is a live camera over there, just so you know,'” he said.

How did they react? “That moment of like, silence. And then it was OK.”

One of the earliest videos shot for the “Too Old to Die Young” Facebook page is an “interview” between Refn and “himself” — himself, in this case, represented by a toy robot who has a lot of great answers for Refn’s insightful questions.

Refn didn’t point to any specific inspiration for that video, really. “It’s like anything — you just come up with ideas and you just kind of go with it… In a way, who better to ask one the right questions than one’s self?”

And beyond that, it represented how the new state of technology meant that “our media is just changing so rapidly it’s almost becoming a whole new beast. There’s a sense of kind of absurdity in that, we can really just interview ourselves and dictate how we want to be perceived because the technology allows us that ability now.”

One trademark of the “Too Old to Die Young” videos is the presence of Refn’s signature red hat, which declares “Make TV Great Again.” It’s a clear reference to Donald Trump’s “Make America Great Again” head-topper, which Refn said he was inspired to create as an American outsider.

“As a Scandinavian coming from a well-rounded political structure of healthy socialism, I, of course, was very fascinated by the election that you had in America,” he said. “It was a bit like going to the circus. I thought it could be fun to make a hat that had a similar slogan than some of your political personalities over here. Because there was such an absurdity to the whole concept in itself. So I just wrote it down one day and was like early on, ‘OK, let’s make some hats with this on.'”

The hat is seen on more heads than just Refn’s on set because it was officially distributed to the full crew. But here’s what it means to the director: “Well, television is dead as it can possibly get. The idea of that TV that you and I grew up on doesn’t really exist anymore, and it’s a digital channel like cinema, it’s an access into something. It’s an accessibility into some kind of artificial world. The reality is that neither television or movies, they don’t really exist anymore… A lot of it came from that kind of idea that, how to make fun of something that is essentially an impossible task. Because television can never be great again because it doesn’t exist anymore. It’s at the fringes of existence right now and once it completely disappears, something else, which is far more interesting, will take its place.”

It all speaks to an approach to making a show that looks beyond what we understand conventional television to be. Meanwhile, he’s still focused on actually making the show in question: “Too Old to Die Young,” Refn says, will continue its 10-month shoot into the summer, followed by a planned 2019 release on Amazon.

“Working with everyone at Amazon has been very fulfilling,” he said. “There’s no difference between me making this or any of my feature films. I very much enjoy it. I especially enjoy the giant canvas I can continue just to indulge myself in. It’s very indulgent.” This includes the live-streaming from set; he says that Amazon has “been cool with it.”

As transparent as Refn wants to be when it comes to this production, he also didn’t want to tease anything people might expect to see in future live-streams. “It’s like Christmas, it’s always better that you don’t know what you’re going to get,” he said.

Not every minute of the “Too Old to Die Young” production is being streamed, but Refn says the reason for that is simply because “technically it wasn’t possible. So now, it comes and goes but ideally, in the future it would be constantly, constantly flowing.”

For him, the reason for that is that he doesn’t feel like anything he’s doing isn’t suitable for the public “because creativity is a public medium. You are creating for something. Creativity is of course, your acceptance of your exhibitionism because it’s a very exhibitionistic process,” he said.

“Too Old to Die Young” may not premiere for another year. But you can keep tabs on it via Facebook, Instagram, and Twitter in the meantime. Check out the first look photos below. This Article is related to: News and tagged Amazon, Nicholas Winding Refn, Too Old To Die Young