Reed Van Dyk's live-action short is based on a 2013 incident in a Georgia elementary school, but it feels more timely and important than ever. 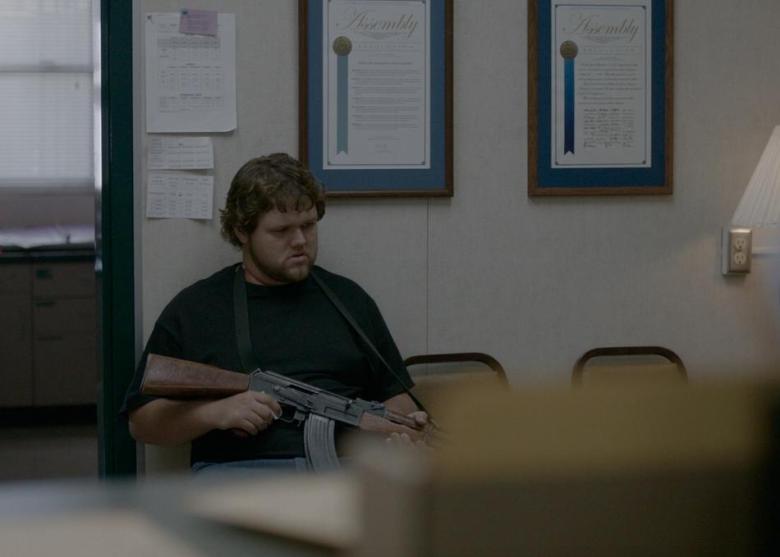 UCLA film student Reed Van Dyk didn’t come up with the story for his Oscar-nominated short film, “DeKalb Elementary.” The story found him. He was already writing a feature script about a mass shooting incident, and eager to make the story as true-to-life as possible, he went looking for recorded 911 calls to get a better sense of how dispatchers handle these kinds of incidents. “I just needed to know how a 911 dispatcher answers the phone,” the filmmaker said in an interview this week. “I just needed to know what the protocol was. What do they say when they pick up the phone?”

He googled “911 call” and found what he was looking for. “This call that my short film is based on happened to be the first one that popped up,” he said.

The call that Van Dyk found was from a 2013 incident at an Atlanta, Georgia elementary school, in which a 20-year-old man named Michael Brandon Hill crept into the Ronald E. McNair Discovery Learning Academy during normal hours, armed with an AK-47 and an apparent death wish. He had no connection to the school or to front office worker Antoinette Tuff, who became something of a national hero after helping talk Hill down from hurting anyone. Much of the event was recorded in a 12-minute-long 911 call, with Tuff serving as an intermediary between Hill and the police, while also administering a level of empathy and care that helped bring the event to a bloodless close.

While the situation led to a happy enough conclusion (no one was hurt), it nevertheless illuminated a topic that Van Dyk has long been interested in, and one that continues to play out across the nation — most recently at Parkland, Florida’s own Marjory Stoneman Douglas High School, where a former student killed 17 people just last week. “I got interested in making this film because of my interest in what is clearly a distinctly American phenomenon,” Van Dyk said. “And the tragedy and sadness of this being a very frequent and recurring scene in American life.”

Van Dyk couldn’t stop listening to the call. “I was so moved by it and just kept thinking about Antoinette Tuff and Michael Hill,” he said. “I just kept thinking about the two of them for weeks.” Eventually, the filmmaker decided to turn the call into his short film “DeKalb Elementary,” which served as Van Dyk’s pre-thesis film at UCLA. He has since finished his thesis, graduated from film school, started writing a new feature script — and now, has earned his first Oscar nomination.

“DeKalb Elementary” was already considered a frontrunner in the live-action short category before the incident at Marjory Stoneman, but it’s taken on an even more meaningful cast in the wake of yet another senseless shooting. It’s also one that offers an unexpected perspective on such incidents, a true call for both action and empathy in the face of unmitigated terror.

“That’s what I couldn’t stop thinking about after I heard the call, the remarkable empathy this woman shares for someone who really wouldn’t have inspired empathy probably from most of us,” Van Dyk said. “I was so moved by that, someone’s capacity for love, understanding, these sorts of things.” Van Dyk didn’t speak to either Tuff or Hill while making the film, in part due to his nerves over honoring Tuff, someone he said he was “really in awe of,” a feeling that hasn’t abated. Still, the filmmaker was lucky enough to have a wealth of research material available, including both the call and a full transcript of its contents, interviews Tuff had given, police reports and court documents, even security footage from the incident. He cast Bo Mitchell (who plays a version of Hill) and Tarra Riggs (who was cast as a version of Tuff) after trawling IMDb pages and holding Skype auditions.

The filmmaker was understandably compelled to do justice to the story, and his initial script only included a few light edits – in his own words, some “shaping” – to make it more ready for the big screen. “There are places where it’s a loose paraphrase. There are places in the script where I added some dialogue,” Van Dyk said. “I obviously didn’t know whether that was exactly what was said, but you had a strong enough sense of the characters at that point that you felt it was probably close to something that had been said.”

Mostly, though, he was guided by his initial reaction to the 911 call. “In this case, I had my own response to that event that I could always check back in with,” Van Dyk said. “It became a kind of a North Star for me. I thought, ‘Well, all I had when I first heard this story was the audio and all I ever got was access to those two people inside that room.'”

It’s no accident that “DeKalb Elementary” stays rooted inside a single room (in this case, the school’s front office), and Van Dyk purposely avoided anything tricky, like cross-cutting to show what the police are doing outside the school. “It’s not important what’s going on with the police,” he said. “It’s more important that we’re identified with the people inside the room and their own confusion about what’s going on outside the room.”

Speaking to Van Dyk in the days after the Parkland incident was more than a little eerie. “I’m sort of equally as struck and saddened every time this incident recurs,” he said. Yet Van Dyk seems cautiously hopeful about the future, at least the one in which the outspoken Parkland survivors continue to lobby for a sea change, the kind that could turn this horrible “American phenomenon” into a relic of the past.

“I do feel inspired by the way I see those kids, who are obviously going through —” he said, then stopped himself. “I can’t even imagine what they’re going through on just a personal level, and that they’re turning all of that feeling and sadness and grief into that determination to finally do something is truly inspiring.”

The 2018 Oscar Nominated Short Films are currently in select theaters. Find out where you can see them right here.