Oscar nominated cinematographers on the gear they used to create the look of this year's Best Cinematography contenders. 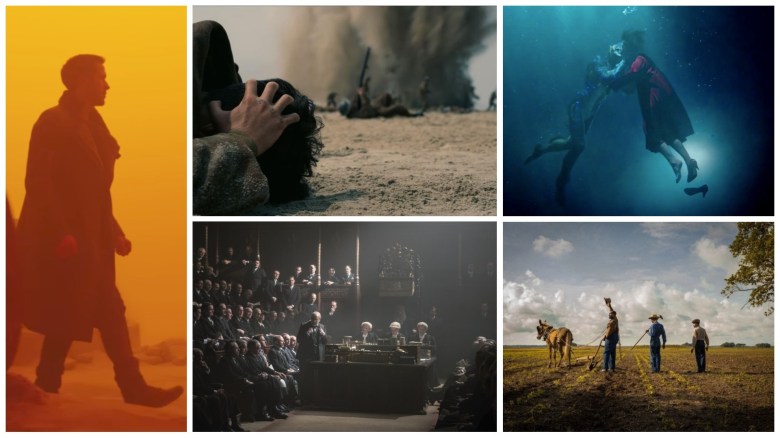 The Best Cinematography Nominees for 2018

Every cinematographer knows that picking the right camera and lens doesn’t create the look of a movie. Yet understanding how these Oscar-nominated cinematographers determined the right tools for these five distinctive films reveals not only their intention, but also their approach and process.

While shooting on film stock continues to make a comeback, with “prestige” period films in particular, what’s interesting is among this year’s Best Cinematography nominees — four of which are period films, three set against the backdrop of World War II — only “Dunkirk” was shot on film, as director Christopher Nolan and DP Hoyte van Hoytema continue to pioneer the use of IMAX film cameras in traditional Hollywood filmmaking. The other four nominees relied on Arri’s Alexa cameras to capture looks as varied as the hot summer landscape of 1940s Mississippi to the wintery silver of Los Angeles 100 years afterward.

Here are the cinematographers behind 2018’s Best Cinematography nominees — “Blade Runner 2049,” “Darkest Hour,” “Dunkirk,” “Mudbound,” and “The Shape of Water” — talking about how they selected the right cameras and lenses. Deakins: I don’t think it’s the camera that creates the look. I think it’s the lighting, your choice of frames, and what you do with a camera. I want a camera that will give me the greatest range, the sharpest image, the most true color. It was the same with film. I never really messed around with film and changed film stocks. I never changed cameras. When we first [talked] about cameras and whether we’d shoot with the Alexa 65, [director] Denis [Villeneuve] said, ‘Well, I like the way ‘Sicario’ looked. Why don’t we just shoot spherical [lenses] and do the same?’ I said, ‘Fine by me.’ That’s kind of what I like. I don’t want a shallow focus that comes with the 65.

I don’t change lenses from project to project unless it’s something very, very specific like with [“The Assassination of Jesse James by the Coward Robert Ford”], otherwise I just want the best tools I can find. The sharpest, the cleanest, the closest to what my eye sees. I’ve been using the Master Prime since they came out because they’re the fastest and cleanest lenses that I can find. Before that, I was using the Cookes because they’re wonderful lenses, but the Master Primes are just slightly faster and I like having that speed. Bruno Delbonnel on the set of “Darkest Hour” Hoytema: IMAX is the richest way to project reality on a light-sensitive surface. The amount of depth, detail, and color captured on an IMAX camera is still unbeaten; it feels honest and pure to me. From the path of the light reflected off the subject in front of the camera, all the way to the light reflected off the screen into the viewer’s eye, lacks digital interpretation and compression adding weight and endless information and clarity. It doesn’t only feel future proof, but also adds to the immediacy and intimacy of the storytelling. It’s part of my job to overcome the impracticalities of the format and to push the rental houses, camera and lens manufacturers to keep building new things to allow this format to become better. “Dunkirk” is effectively storytelling by action. The stress and constant relentless threat on our main characters required the most visceral way to tell this story I could think of. Morrison: Both [director] Dee [Rees] and I would have LOVED to shoot film. But we were trying to pack an epic amount in an indie shooting schedule, and when it became a choice between celluloid or shooting days, we had to make a tough sacrifice. When it comes to digital, I have always found the Arri Alexa line to be the most natural with regard to skin tones and highlights. We shot Arri Raw Open Gate on the Mini with older glass and a filmic LUT. I rated the camera at 1280 ISO and added grain in post. It’s not the same as film, but we did feel like we managed a tactile quality reminiscent of some of the photography that was our inspiration. Plus, shooting digitally afforded us a working stop where I could actually light with double-wick candles and lanterns, something which I believe added authenticity to the period lighting.

“The Shape of Water,” Dan Laustsen Laustsen: When Guillermo del Toro and I commenced our process on “Shape of Water” and talked about how to film his amazing script, it was important for us to tell the 1962 story in a modern yet classical style. It was paramount to us that the light should be a great part of the dramatic storytelling, with deep shadows and soft highlights; and that all the actors would be lit as pleasing and classically as possible. In order to achieve this, we needed to use a camera with the the best color reproduction and best exposure latitude. We chose the Alexa ST and Mini, and since we love sharp and contrasted images, we chose the Master Prime Lenses. This equipment really helped us in achieving the visual expression we strived for.

This Article is related to: Awards and tagged Best Cinematography, Cameras, Rachel Morrison, Roger Deakins, Toolkit, Top of the Line