For fans of the original Bravo series, these eight episodes featuring a new Fab Five are something to savor. 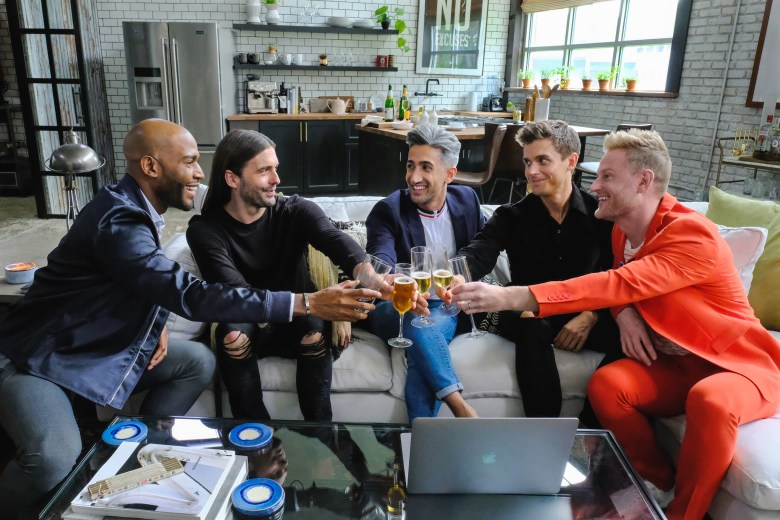 When the first iteration of “Queer Eye for the Straight Guy” launched, George W. Bush was President, gay marriage wasn’t legal, and fighting for LGBTQ rights was a revolutionary act.

15 years later, things have gotten better on a basic, legal level, but society is still scary. Fortunately, here come the Fab Five, preaching their fierce desire to push society beyond tolerance to acceptance — not just for gay people, but for diversity of all kinds.

It feels fair to call the newest “Queer Eye” a reboot, if only because it does feature an entirely new cast. But the role breakdown echoes that of the original series: There’s Tan France (Fashion), Antoni Porowski (Food), Karamo Brown (Culture), Bobby Berk (Design), and Jonathan Van Ness (Style). The group dynamic is notably different, as all five guys bring a puppy-like enthusiasm to each challenge, literally bounding around at times in each subject’s house with gleeful energy.

On a production level, fans of the original series will find it reassuringly familiar as the series works within a similar format. The show isn’t necessarily elevated beyond typical reality fare, especially given how closely it echoes the original series’ format of subject set-up, followed by home invasion, followed by transformation and end result. Because of Netflix, there are no act breaks but episodes are stilly broken up by “days” to maintain a similar rhythm. No real twists or turns here —spoiler alert, in every episode of “Queer Eye,” the Fab Five make lives better. The ending’s always pretty predictable, in the best way. But sometimes, that’s exactly what a person needs in this insane world.

While this is decidedly the television equivalent of comfort food, real issues do come up, especially since the show was shot last summer in Atlanta and surrounding towns. That’s right: The Fab Five make over at least one Trump supporter, and other political and cultural conflicts do arise, though these moments are always couched in mutual respect.

One scene that will definitely have people talking is in Episode 3, when the Fab Five get stopped on their way to that episode’s assignment by the local police. Guess who’s driving? Karamo, one of the two non-white members of the team (Tan, from the back seat, says “they spotted me!”). Things work out just fine, but the scene ends up kicking off a deeper discussion, later in the episode, about police brutality that does challenge everyone involved.

Meanwhile, haircuts are administered, drab decor is replaced with stylish dark wood and pops of color, and other lifestyle tweaks are made to not just update wardrobes, but help each subject become not just more stylish, but more confident. One of the show’s best adjustments is that four of the five Fabs have always had clearly defined roles — grooming, food, design, style — but the gentleman representing “culture” has always been a bit harder to lock down. Fortunately, the show has an answer to this: Brown (whose first entrance into becoming a public figure was being the first out gay black man on reality TV after appearing in MTV’s “The Real World” in 2004) essentially becomes a life coach, encouraging each man to embrace their best selves

One element that feels a bit uncomfortable is just how much the guys talk about the sex lives of the single men they’re making over. It makes sense that sex might be mentioned as a part of the show — but wow, there’s a lot of discussion about how their new looks and new homes are totally going to get them laid. For a show about self-improvement, the search for a happy ending seems to put a lot of emphasis on how the subject’s new look will be embraced by the people around them, especially the ladies.

The group as a whole embody a natural chemistry, though Jonathan Van Ness becomes a clear standout: If you ever doubted that Van Ness was essentially playing himself on Funny or Die’s “Gay of Thrones,” seeing him in this setting will disabuse you of the notion. Even unscripted, he’s too fierce for words. (Fun fact: When IndieWire went to observe a taping of “Gay of Thrones” last year,  Van Ness was the first person we encountered — he was entering the Funny or Die offices at the same time, having just flown in from Atlanta for the shoot. The “Gay of Thrones” shooting schedule overlapped with “Queer Eye” all summer long.)

Ultimately, the most notable aspect of this reboot is the deliberate name change. “Queer Eye for the Straight Guy” launched with a title that made its mission statement so very clear, and theoretically the first season of the Netflix relaunch doesn’t deviate too far from that (not every makeover subject in the first season is a straight man, for the record, though no women were the focus just yet).

Yet shortening the title gives it a broader element, indicating how the “queer eye” doesn’t just improve the life of a singular straight guy. There is an episode featuring a gay man, but it goes beyond that. By embracing a man’s life in so many ways, it acknowledges the fact that it’s not just his life being changed. Because, as John Donne once wrote, no man is an island. We have so many opportunities to learn from each other, to grow and explore, and to improve the worlds of those who surround us. Not all of us can do it as fabulously as these guys, but they can inspire us to try.

Eight episodes of “Queer Eye” are streaming now on Netflix.

This Article is related to: Television and tagged Netflix, Queer Eye, TV Reviews