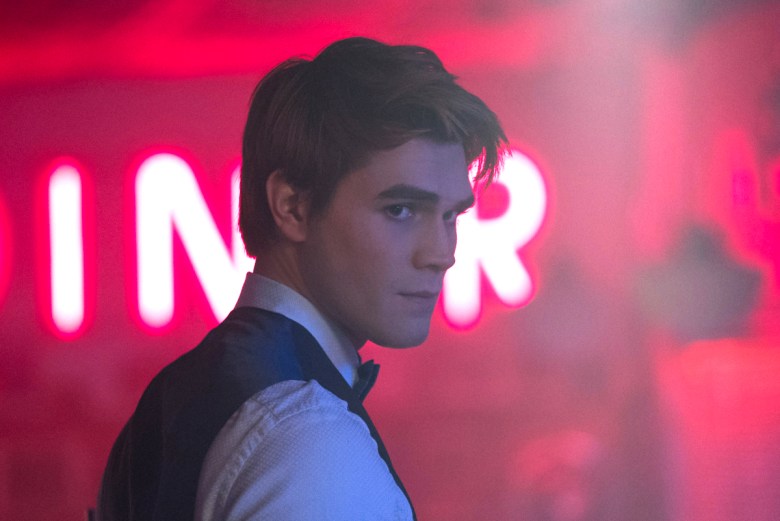 Archie Andrews (KJ Apa) just proved he has a tolerance, and therefore the potential, for darkness after his love for Veronica Lodge (Camila Mendes) made him side with her shady parents. On Wednesday’s episode, that meant he turned a blind eye to mob dealings and may have even inadvertently caused the murder of a the gangster deliciously named Papa Poutine.

That wasn’t all that went down on Wednesday’s jam-packed “Riverdale” though. The Cooper mother and daughter hid the corpse of a man Chic (Hart Denton) killed, the Mayor (Robin Givens) stepped down to avoid a scandal, Archie’s FBI guy proved to be a fake, and the mastermind behind the ruse was none other than Hermione Lodge (Marisol Nichols).

Sitting in the director’s chair for the episode titled “The Tell-Tale Heart” was none other than Julie Plec, creator of “The Originals” and co-creator of “The Vampire Diaries.” Although she has plenty of experience behind the camera, “Riverdale” presented a unique challenge for her visually.

“I was so blown away with the look of the show because it’s so specific and stylized and cool,” she told reporters at a screening of the episode. “That’s hard to do on a TV schedule. Brendan [Uegama] the DP is just a genius. There were a lot of references, lot of Hitchcockian references, lot of noir references. And when I read it I was like, ‘Shit, I don’t know anything about noir!’ So I went on like a crash course and just watched and got a bunch on iTunes, bought a bunch of movies.”

She also found visual insights in one the Coen Bros.’ directorial debut, “Blood Simple,” on which Barry Sonnenfeld acted as cinematographer.

“I really actually found the most inspiration outside of the actual short film ‘The Tell-Tale Heart,’ but from ‘Blood Simple,’” she said and then addressed “Riverdale” creator Roberto Aguirre-Sacasa. “I didn’t realize, you guys — the way you use color on the show in general — is massively, like beautifully influenced by that.”

She also was candid about the one scene in which Jughead (Cole Sprouse) and Betty (Lili Reinhart) get rid of the car that belonged to the man Chic killed. They shove it into the lake in a scene that is directly borrowed from Hitchcock’s “Psycho,” when Norman Bates hides Marion Crane’s car. Here’s a look at the original scene:

“I wanted to make sure that was a blatant homage/ripoff,” said Plec. “So that it was shot exactly how that was done. I mean, I had other angles that we shot just to be safe, but like really trying to just reflect that moment as specifically as it was done. So for me it was really fun just immersing myself as much as I could in a short period of time into a genre that I wasn’t that familiar with.”

Aguirre-Sacasa was also on hand to answer burning questions about the episode and tease what’s coming next.

Riverdale’s resident redhead doesn’t seem terribly bothered by choosing to side with Hiram Lodge (Mark Consuelos) by not informing on him. Not only that, it turns out that Hermione Lodge is just as deep into the shady side of the family business as well, having set Archie up to be tested by the fake FBI agent, and now welcomes him as a trusted member of the family. Aguirre-Sacasa discusses why Archie might be willing to be influenced by them.

“I think Archie started on a darker path in the first half of the season. When Fred was shot and when the Black Hood has his gun on Archie, Archie felt powerless and paralyzed,” he said. “He never wants to be in a position of weakness again, and there’s something attractive about the way the Lodges do business. There’s something attractive about the way that Hiram wields power that Archie is drawn to. I think that’s what we’re exploring in the second half of the season as Archie starts to get deeper and deeper into the Lodge family business. It’ll put him at odds with his dad who’s such a great salt of the earth, honorable guy… There’s drama ahead.”

Black Betty and the Black Hood So far, Archie has nothing on Betty when it comes to giving into her dark impulses. Having Chic around murdering people probably doesn’t help either. According to Aguirre-Sacasa, she’ll return to webcamming and other borderline dangerous pursuits.

“[Webcamming] does come back, again in an unexpected way, I think,” he said. “I think the darkest that things got for Betty when she was kind of in a codependent relationship with the Black Hood, taking his calls. But things get dark for her moving forward. we sort of allude to the fact that the Black Hood story isn’t over. Betty saves the Black Hood mask from the fire, and Archie asks the FBI agent to look into it. I think it’s safe to say that it’s going to continue but not in the way that you might expect.” The first shocker about the boss calling the shots when Archie is picked up is that it’s Hermione Lodge – not her husband Hiram. And then she revealed that Agent Adams (John Behlmann) was not actually with the FBI at all but had been a plant to test Archie’s loyalties to the Lodges.

“Originally he was going to be an FBI agent. Greg Berlanti had said, ‘Careful with the FBI agent stuff and the Archie going undercover for the FBI and wearing a wire,’” said Aguirre-Sacasa. “He said, ‘Archie shouldn’t wear a wire. We did it on “Dawson’s [Creek].” People didn’t like it.’ or whatever it was. So really quickly, we were like, ‘OK so let’s say he’s not an FBI agent.’ And then originally he was just going to be Hiram’s right-hand man or informant. And then as we were writing the episode we thought, ‘Oh, people might think he’s Hiram’s, so what if we make him Hermione’s?’

“As we get in deeper into this ‘Godfather’ story, we wanted to make sure that… Hiram and Hermione were more equals and that she wasn’t just like the gangster’s moll or like Michael Corleone’s, Diane Keaton was just at home with the kids. We’ve been trying to build her up as well to be a formidable player in this. We also talked a little bit how they’re like the MacBeths, they’re a scheming couple.” Now that Sierra McCoy has stepped down from the office of mayor, that’s not the end for ability to influence in Riverdale.

“Mayor McCoy is now going to be Attorney McCoy. In fact, we see her as legal counsel in the very next episode,” said Aguirre-Sacasa. “So she’s very much going to be part of the fabric of ‘Riverdale.’ We still have a big family story for her and Sheriff Keller and Josie and Kevin coming up as well.”

The Coopers’ prodigal son can’t just get away with murder so easily. Aguirre-Sacasa said, “We’ll be feeling the repercussions of that murder probably for most of the rest of the season. I think we will find out what exactly happened in the kitchen, but it’s more like the chain reaction that murder and cover-up sets up going forward as well.”

Speaking of Chic, his mother Alice won’t get away so easily with covering up the murder either.

“One of my favorite movies, it came out 10-15 years ago was a suspense movie called ‘The Deep End’ with Tilda Swinton where her son gets caught up in a murder and Tilda Swinton is sort of a suburban mom in Tahoe and she has to cover up the murder. it’s a very Hitchcockian kind of story,” said Aguirre-Sacasa. “That’s kind of what the inspiration was for this episode, which was seeing Alice and Betty cover up this thing that they shouldn’t be covering up. Of course it’s shaking loose a lot of truths, like the truth about Chic. We’re going to find out much more about her relationship with F.P. We’re starting a bigger story that involves all of the grownups in a kind of a more full-blooded way in the second half of the season. Everyone’s gonna be drawn into one big story.”

“Jughead is still writing a novel,” Aguirre-Sacasa said. “We hear about that in the next episode.”

“Riverdale” airs Wednesdays at 8 p.m. ET on The CW.

This Article is related to: Television and tagged Julie Plec, Riverdale, Roberto Aguirre-Sacasa