The surprisingly action-light "Will You Take My Hand?" puts the focus on characters and ideals. 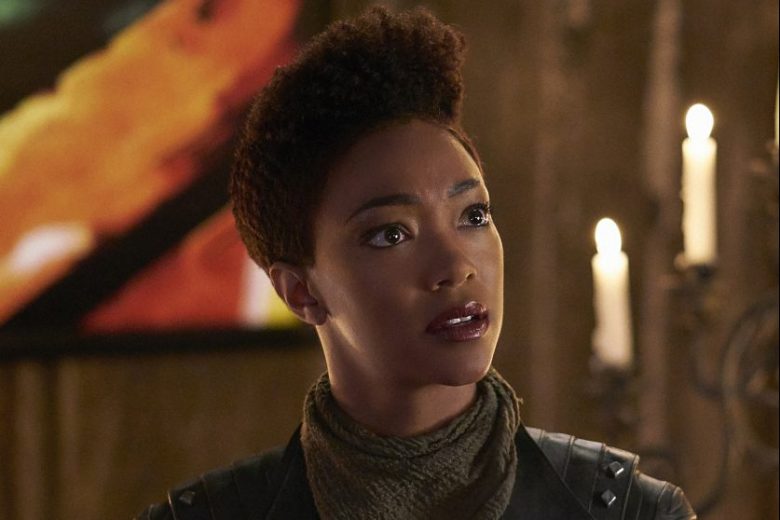 We pick up where we left off last week, with the Least Great Plan Possible in full swing: Emperor Georgiou, shockingly enough, isn’t doing a great job of impersonating her less-evil counterpart from the Prime Universe, especially while doing things like beating the crap out of L’Rell for information or emotionally abusing Voq/Tyler (Voqler? Tyq?). But she does get the Discovery to Kronos, choosing Burnham, Tilly, and Tyler (yeah, we’ll stick with Tyler for right now) to accompany her to an Orion outpost on the surface for information about the best place to set up a device to scan the surface for military targets. (Or so Georgiou says, anyway.)

At the Orion outpost, everyone gets into their share of trouble while looking for intel — Georgiou gets laid, Tilly gets high, and Tyler and Burnham go gambling (which triggers Burnham’s buried trauma over the death of her parents at the hands of Klingons). But with the acquisition of the information they’re after comes a new level of truth: The device Georgiou aims to plant isn’t a scanner but a bomb tjhat would destroy Kronos.

Burnham, horrified, confronts Admiral Cornwell over this plan and gets her to admit that it totally sucks (or, to put it in a more sophisticated way, totally betrays the principles of the Federation). Not only does Burnhan manage to convince Georgiou of the same before she detonates the device, but that device ends up becoming the key to peace, thanks to L’Rell — the new ruler of the Klingon Empire, because she holds the fate of Kronos in her hands.

The war is over, and the Discovery heads to Vulcan to pick up its new captain. But before they arrive, they get waylaid by a distress signal from a fellow starship… a little vessel you might have heard of called the goddamn USS Enterprise, led by Captain Christopher Pike. Cue the bongos!

So, in last week’s review, we aimed to predict who might die during the season finale — and boy howdy, were we ever wrong. This bloodless episode instead put the emphasis on discussion, celebrating the ideals of the Federation that the actions of Admiral Cornwell and others nearly tarnished permanently, and it was genuinely inspiring — while also not relying on a body count for dramatic heft. We were predicting more action, perhaps, especially given the battle-heavy episodes that preceded the finale, but honestly, this was good. This was “Star Trek,” albeit unlike any “Star Trek” that’s come before.

The redemption of Tyler as a character, following the “neutering” of his Klingon self (a hard thing to trust), could not be an easy journey, given everything that happened between him and Burnham… But this episode may have let him off the hook more than he deserves. While last week’s “breakup” did a solid job of establishing Burnham’s completely well-justified trauma, “Will You Take My Hand?” witnessed her seemingly forgiving him, even as she lets him go.

There’s no hard and fast transition point in the episode for that choice, though, except perhaps when she tells him the story of how her parents died. Their final scene together is a beautiful one when watched with no connection with what’s come before, but it’s still a bit hard to buy.

In the proud tradition of Mirror Universe Kira, Mirror Universe Willow, and no shortage of non-Mirror Universe characters in pop culture, “Will You Take My Hand?” established that Emperor Georgiou is canonically bisexual, thanks to her choice of Orion prostitutes. It’s a bit of a tired trope, to be honest, but Michelle Yeoh sells it, and Tilly’s reaction is fun. (In fact, all of Mary Wiseman’s reactions in this episode are a delight, especially when touches of her “Killy” side come out.)

While we’re at it, quick shout-out to the costumes in this episode, especially Georgiou’s fringed space cape. Simply magnificent. All the “Star Trek” nerds in the crowd who freaked out as soon as they saw the beginning of the Enterprise’s registration number appear on screen, please raise your hand.

Because “Discovery” takes place approximately around the time of Christopher Pike’s time as captain of the Enterprise, it shouldn’t have been all that shocking that the titular ship would encounter Starfleet’s flagship at some point. But the choice to do it now was truly fun. Even if the Enterprise is facing an emergency when we encounter it, its presence feels like a promise that the darkness of war is behind us — and that adventure lies in wait.

For the record, IndieWire is already brainstorming its casting ideas for Pike… as well as, if they go for it, a young Spock. Given the set-up, there’s no way for Burnham to avoid confronting her adopted brother here.

“We have to be torchbearers.”
—Burnham

Burnham’s lengthy speech to the council awarding her and her fellow crewmen with well-deserved honors had plenty of standout moments. But there’s something interesting about her choice to invoke Voq’s official title within the Klingon Empire, which speaks to how both civilizations are now struggling to sort out their place in the world. On a personal note, it’s been legitimately fun to cover “Star Trek: Discovery” on a week-by-week basis. Not only is that a quasi-rarity in this era of binge-viewing, but the show has only grown more and more compelling over the months, and while the first half of the season was a bit wobbly, the show’s January and February episodes were solid, giving the show a truly cohesive feel.

“Will You Take My Hand?” was very much not what we anticipated, but we’re not complaining. All of the action in the Orion trading post was a fun diversion, but the meaty conversations that occurred between Burnham, Cornwell, and Georgiou spoke to the fact that while “Discovery” has never been afraid of the darkness, it has a genuine commitment to the light.

The choice to remove characters from the equation but not in a permanent way (while also setting up a few new key players, including Captain Pike and whoever might be tasked with captaining the Discovery next) speaks to a show that’s planning long-term, which is fun to witness.

There are gaps to fill, looking forward, especially when it comes to what we might expect “Discovery” to be as a show in future seasons. But it has built up a strong foundation, delivered some fascinating storytelling, and shown us what’s possible within the world of “Star Trek.” Can’t wait to see where we boldly go next.