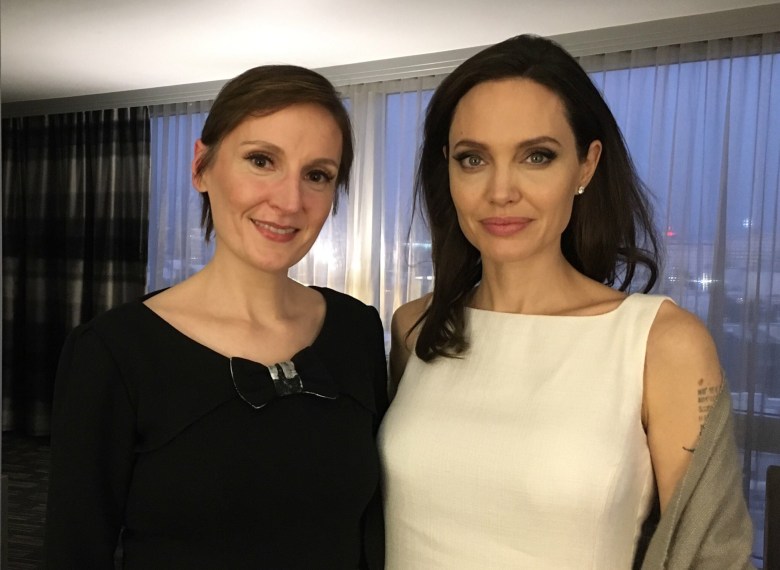 However, Twomey didn’t want Jolie’s name; she wanted her mind. This would be Twomey’s first outing as a solo director, and she recognized early on that she could use Jolie’s expertise on Afghanistan, where the U.N. Goodwill Ambassador has built schools for girls. Twomey wanted to tackle a sensitive drama about political oppression with adult sophistication and style; the story is based on Deborah Ellis’ 2000 YA novel about a tough 11-year-old girl who dresses as a boy in order to feed her mother and sisters when her father is captured by the Taliban.

So Twomey reached out to Jolie through mutual friends Jehane Noujaim and Karim Amer, the Egyptian filmmakers behind Oscar-nominated documentary “The Square.” Said Jolie, “We knew each other from working on refugee issues.”

Jolie not only offered advice about story beats and hiring voice actors, but also the intricacies of Afghanistan culture and navigating the country’s infrastructure. “Who better?” said Twoney. “She’s like a diplomat. She had a long interest in Afghanistan and an understanding of the issues we tried to explore in ‘The Breadwinner.’ She was someone who didn’t take anything lightly, she thought deeply, it was evident in everything she does. That was something we could use.”

“When we met, we just both saw the same film,” said Jolie. “We want people to respect what these young children go through and understand this magical culture with a rich, deep history. With the Afghanistan people, you only think about oppression. You don’t think about how a father loves his daughter, and what a daughter will do to risk her life for her daddy. People don’t think of those things, especially for Afghanistan after all these years of war.”

Twomey and Jolie also agreed to not pander to young viewers, but be willing to show them the realities of conflict. “We make big mistakes when we speak down to children on these issues,” said Jolie. “I’ve been surprised by the children I’ve brought to see this film — I thought my own would understand this — but others may see a woman in a burqa being beaten by the Taliban for the first time, or see why a little a girl would have to go to work to feed her family or change her gender in order to do that, what this is for women… They are able to absorb that and walk away feeling that they would be friends with Parvana, that they like to see themselves in her, that they are proud of Parvana and believe they are capable of more as children, that their voices matter.”

Twomey and Jolie were closely involved in the casting of the Afghan voices. Jolie listened carefully to tapes “to find the soul of the person,” she said. “This voice is too funny, or too old, or this person doesn’t sound as gentle.”

“She has an actor’s ear,” said Twomey, who credits Jolie with helping her cast an actress with a bubbly personality as Parvana’s best friend to counterbalance her heroine’s gravity. “She can’t be happy, as she is mourning her father who is missing.”

One way to modulate the terror was to keep the audience connected to the characters and show the stark beauty of the landscape and the power of a young girl’s fantasies. Twomey used an Afghanistan color palette to show “Parvana’s imagination and capacity as a storyteller and connection with her father and culture,” she said. “We wanted it to be a celebration of a young girl’s imagination, her love for her father and family, and her innocence and wisdom and flaws. We wanted her to be quite real: Imagination allows you to do that.”

Added Jolie, “I’d give little hints here and there for the early boards and the music,” she said. “The biggest discussion was about how do you end this: You cannot say, ‘Here come the planes and everything was better.’ You can’t do that to this country. And yet you want to give hope and say there’s a moving forward and yet have to be realistic that there is a future for Afghanistan.” Twomey screened the movie for the First Lady of Afghanistan as well as an Afghan educator who also dressed as a boy to go to a secret school; the woman now runs schools for girls in Kabul. Older relatives of the film’s voice actors have been moved to talk about their own experiences for the first time after seeing the film. The filmmaker also screened “The Breadwinner” for the U.N. representative from Afghanistan, where the dubbed movie will be shown on television. “They have embraced it,” she said.

Jolie can’t wait to go back to the country and screen it as well. “They have ‘Sesame Street’ with Afghan characters,” she said. “Art has made its way. The Afghan people are an extremely creative people. They love this film because of all of their own that they recognize, from the way they have dinner to the music.”

This Article is related to: Awards and tagged Angelina Jolie, Best Animated Feature, Oscars, The Breadwinner