The actress' first time behind the camera was a tricky half hour that included a dream sequence and way more hockey than she planned for. 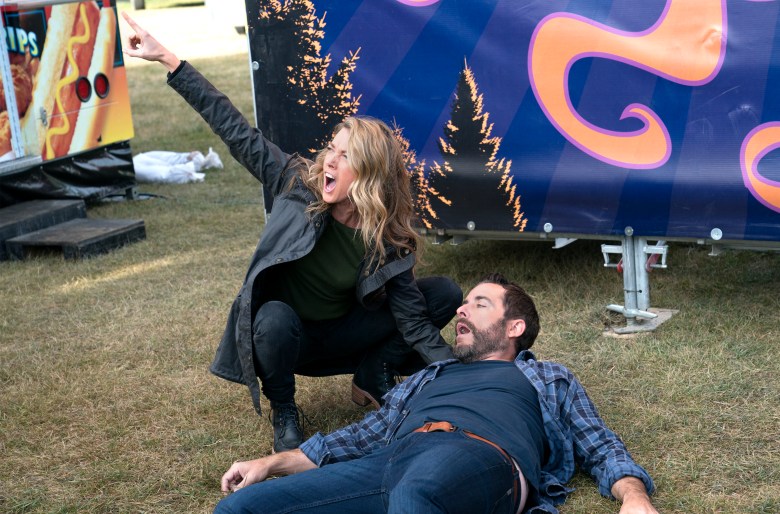 [Editor’s note: The following contains spoilers for “The Detour” Season 3 Episode 4, “The Goal.”]

The first scene that Natalie Zea ever directed for TV was the restaurant karaoke sequence from Tuesday night’s episode of “The Detour.” If two Broadway vets (Laura Benanti and Gideon Glick) singing “Almost Paradise” to Jason Jones’ Nate sounds like a tame scene description, know that it would still probably be one of the wildest scenes on most other TV comedies. For Zea, it was far from a simple first assignment (and not just because of the 360-degree camera move at the end when Nate and Zea’s character Robin reunite).

“That was my first scene that I directed. I was awful,” Zea told IndieWire with a laugh. “You have a lot to prove. It was feelings that I haven’t felt in a while. I’ve been acting for 20 years and when I walk onto a set, even when it’s a new show, there’s the jitters and the butterflies, but I know what I’m doing and I’m confident in that. With this, it was really like the first day of school.”

Luckily, Zea had a former co-worker who had firsthand experience directing TV episodes during his own career.

“David Duchovny said, ‘The best piece of advice I’ll give you is — first of all, let the DP direct the episode.’ I was like, ‘OK, I’m not going to do that!’ (Our DP [Walt Lloyd] was incredible. I hope he comes with us forever.) Secondly, you’re going to be asked a shit-ton of questions. Never say I don’t know,” Zea said. “So I took that piece of advice and I was like, ‘Oh, that’s easy.’ So many times my mouth would open to say, ‘I d–.’ Even if I didn’t know the answer, I would say something. Anything. So that was a good piece of advice. If I can continue to take that advice, I’ll at least look like I can make decisions.”

Given the jam-packed shooting schedule of “The Detour” that handles some episodes out of sequence, Zea had a chance to come back for her next directing day with some added confidence.

“Around the second day, I was making definitive decisions and creative decisions. I remember looking at my watch and knowing that I was going to make the day early, which is all you ever want, especially if you’re new,” Zea said. “I still have a lot to learn, but I was surrounded by people who were incredibly helpful. You gotta get thrown in the deep end at some point.” Natalie Zea, directing an episode of “The Detour”

Another big challenge (aside from making sure the production schedule doesn’t get thrown off track)? Having to direct on-ice hockey sequences. She credits her frequent screen partner Jason Jones and executive producer/episode writer Brennan Shroff for guiding through a particularly physical day of shooting.

“Brennan Shroff was a lifesaver to me during that particular sequence,” Zea said. “The rest of the episode, I feel like I was very confident with. Even the dream sequence I had storyboarded because I was in the chair the whole time getting fat.”

That dream sequence, plucked from the mind of Benanti’s character Edie, originally featured a fantasy version of Robin with a much different voice to accompany her changed physical appearance (and sensible Clam Jam Box).

“When I saw the first cut of that, the pitch was so low. I sounded like Allison Janney on testosterone,” Zea said. “I was like, ‘Guys, that’s too much.’ So we ended up finding a happy medium with that. Jason wanted it lower and I said, ‘Dude, it’s just too weird.’ You don’t want people to turn it off because they’re like, ‘That’s too much.'”

Even though some of the episode’s hockey sequences were tricky to handle, it came after two full seasons of being on a set where she’s learned to always expect there to be an extra level to every scene of potential mortal peril.

“There’s so much blood used on this show,” Zea said. “We have a completely new crew every year. So every year we have to train makeup that it’s always going to be more blood. Always, always, always. More, more, more. Every time, whoever it is will bring a little 5-oz. and Jason will just roll his eyes and be like, ‘More!‘”

Between Robin’s on-screen antics and the chaos that Zea had to manage while making “The Goal,” working on “The Detour” has meant getting to do a little bit of everything. Sometimes it’s having a poignant, meaningful family moment. Other times, it’s riding a mechanical shark that’s painted to look like a whale.

This Article is related to: Television and tagged Natalie Zea, TBS, The Detour