Sera Gamble and John McNamara spoke with IndieWire about the groundbreaking episode. 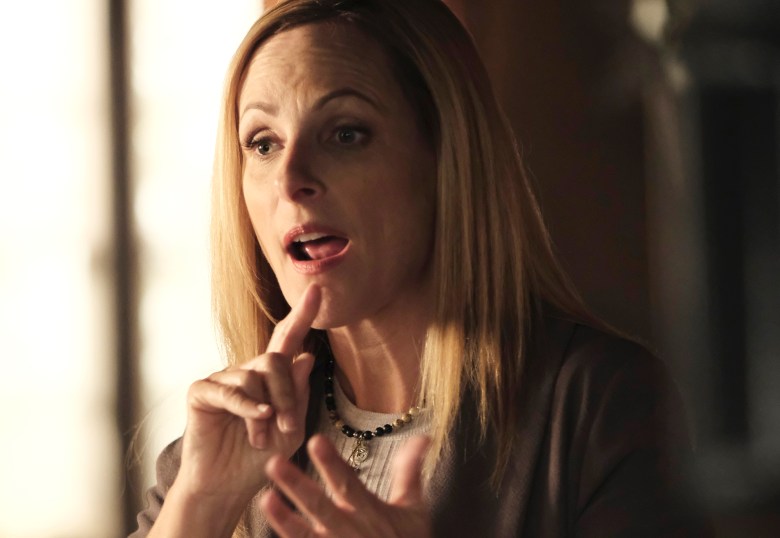 As with many of Marlee Matlin’s gigs on TV, her role as Harriet on “The Magicians” wasn’t written with a deaf actress in mind. But once she landed the job, the show adjusted to reflect her unique qualities, such as incorporating more of her dry humor into the dialogue. On Wednesday’s episode, however, her deafness was the inspiration for a full storyline told from her point of view, complete with the audio tweaked to approximate for viewers her more limited hearing.

In “Six Short Stories About Magic,” which was written by series co-creator Sera Gamble and David Reed, it’s revealed that Harriet is the grown daughter of the Neitherworld Librarian, Zelda (Mageina Tovah). While her mother is content to work in the confines of the temporally slow library, safeguarding all the magical tomes, Harriet had always sought adventure in the outside world, where time moves normally.

In Harriet’s backstory, we see her in various stages of development while her mother is unchanged. Eventually, she breaks with the library completely after a disagreement over policy: Harriet wants the library to open up its doors and offer up a free flow of information, but Zelda thinks that’s dangerous if it falls into the wrong hands.

“We started with the question: What is Harriet’s story and why is she so at odds with the library?” Gamble said in an interview with IndieWire. “The best answer is always the most personal one, right? We’re certainly at a time and a place where politics is very visceral for all of us, but family is even more visceral. We just wanted the deepest possible story. I believe it was David who first pitched the idea.”

Co-creator John McNamara added, “He’s the one who remembered that time moves more slowly in the library. And therefore if Harriet were making forays to earth, she would age normally, but her mother would barely age.” Hooked on a Feeling

For most of Harriet’s portion of the episode, the audio is relatively silent while she and characters around her sign to each other as they plan out their quest to retrieve a special key from the Neitherlands Library. In order to access it, they cross a special bridge that is anchored by two mirrors, through which they climb in and out of, “Alice in Wonderland”-style.

During a more intense action sequence, though, in which magical fire and barriers are thrown around, more sound can be discerned as a muffled sort of reverberation occurs. This was done to replicate the sounds at low registers experienced by many deaf people who don’t have 100 percent hearing loss.

“Our sound design people worked really hard on very subtly using sound so that people with hearing who are watching the episode are given the impression of feeling vibration rather than hearing,” said Gamble. “We were having these conversations about the sounds that we have created and designated for different magical spells – we’ve called them whooshes and shimmers and dings… If you couldn’t hear it, would you be able to feel it? And what would it feel like? So for example, when, when Harriet casts that baby fireball, what does that feel like against her body if she’s barely hearing with her ears?

“And as we were cutting the episode, in order to give us kind of a sense of what that would be like, [our producer] set up a microphone against his AVID station and he wrapped it in a bunch of bubble wrap and cellophane. He recorded all of the sounds through this intense level of physical muffling and then he played it back into the cut.” Through a Glass Darkly

It’s a shock, then, when the muted sounds are disrupted by the violently abrupt shattering of a mirror. In fact, both ends of the Mirror Bridge have shattered, which does not bode well for Harriet, who is on the bridge. While McNamara could not speak to her fate, he did address how the scene was accomplished.

“The set was totally black so the glass would be seen against the black. What it required was really well-timed explosives set in the glass, which was breakaway glass that doesn’t actually hurt anyone,” he said. “The thing that makes it the most effective is that it’s shot in slow motion. That’s what gives it this kind of eerie, terrifying nightmare effect.

Gamble added, “We have to give a lot of credit for that to [DP] Elie Smolkin, who had done Episode 104 in Season 1 with Jane Chatwin and Quentin Coldwater in the insane asylum. Elie developed a strategy for shooting a void that goes on forever. And so we were confident that a mirror bridge would be doable and would look cool because he has set himself up to now be thrown these kinds of challenges by us all the time.” Harriet and her mother both reference The Great Blank Spot, the portion of everyone’s biographical book in the library that for some reason is full of blank pages. It’s disconcerting, to say the least, and according to Gamble, it’s related to Cassandra, the old lady stuck in a room writing the books, who looks a lot like the gang’s friend Alice (Olivia Taylor Dudley).

“The season is the Great Blank Spot,” she said. “The whole story of Cassandra is the answer to the question why the book stopped in that moment. They stopped because the library had magically mechanized her gift/curse. And without it they were left with one crazy lady in a room with really long hair, writing one book at a time.”

She added, “Part of the reason that Cassandra looks like Alice, and is played by Olivia Taylor Dudley, is because it is exactly the kind of ‘what the fuck?’ that we just really love when we’re watching fantasy. So we did it because it made our head spin and we liked the feeling, and we wanted to pass it along to the audience.”

It was revealed recently that the white powder that bestows magical powers on the person who snorts it is obtained in a horrifying way: it’s made of fairies. Unaware of this barbaric practice, Harriet stumbles upon a briefcase full of powder-filled vials in the library.

McNamara is keeping the mystery alive for now, but said, “They’re a big MacGuffin in the whole season. There have been maybe one of the two or three biggest MacGuffins of this whole season.” Although most of the details of next week’s musical episode, “All That Josh,” has been kept under wraps except for a few songs, the sneak peek below of the gang’s cover of “Under Pressure” has been out for a while. McNamara did reveal a few other details, though, namely that zombies will also somehow be involved. No word if the zombies will sing.

“[The song] was very strange to stage because we’re cutting between five different locations, and there are obviously moments where, in every location, every actor sang much more than is on screen,” said McNamara. “So at times, it could feel really kind of awkward. Three actors are in the Physical kids’ cottage surrounded by killer zombies and they’re just singing, and everyone’s just standing there.

“And Jamie Conway, the director, said to them on Day One, ‘You’re gonna feel kind of hung out to dry at times. You’re going to feel like you don’t know what you’re doing, you don’t know why you’re singing, you don’t know why we’re not walking from Point A to Point B. I promise you, this has been really carefully storyboarded. We know exactly where the cuts are going to come. You will never look any more stupid than anyone singing “Under Pressure.”‘ I thought that was a really good piece of direction.”

Take a look and decide for yourself:

”The Magicians” airs Wednesdays at 9 p.m. ET on Syfy.

This Article is related to: Television and tagged Sera Gamble, The Magicians, TV Interviews