In this dispatch from a student at MIT's Open Documentary Lab, a look at several new VR projects that show how the technology can bring people together. 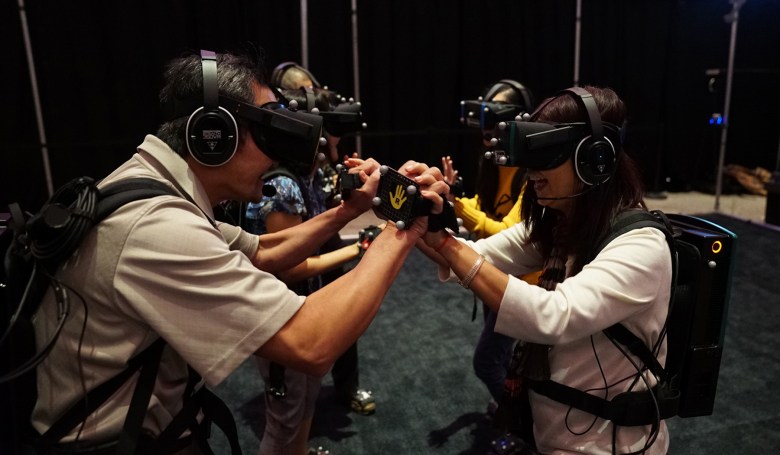 The New Frontiers scene at Sundance

Each year, members of MIT’s Open Documentary Lab take a look at the interactive works at Sundance’s New Frontiers section. This dispatch explores the social possibilities of VR.

Most virtual reality experiences are characterized by individual immersion. The viewer puts the headset on and, suddenly disconnected from his or her surroundings, dives into another universe. But the New Frontier section at this year’s Sundance Film Festival reflected a growing tendency towards social VR experiences, showcasing a number of projects where participants shared their virtual journeys. Ranging from animation to documentary, the projects “Chorus,” “VR_I” and “Zikr: A Sufi Experience” connected different people into a common interactive VR experience, exploring ways of engaging them in this other reality.

In “Chorus,” a group of six participants goes on a nine-minute journey virtually embodying different fantastic female animated characters who fight evil at the sound of the energetic homonymous Justice song. The experience is created by Tyler Hurd, a 3D animator and a Sundance alum, and it is the second social VR production of WITHIN. Last year, they premiered “Life of Us” at Sundance — a group experience where participants transformed into different beings to playfully experience the evolution of life on earth.

In both cases, each participant is enclosed in a separate physical space but their virtual bodies encounter in the simulated environment, where they can trigger different interactions through their movements and voice. According to Chris Milk, co-founder and CEO of WITHIN, “The ability to experience a story with another person that you live together, rather than watch together… will fundamentally change not only the way we connect to stories, but the way we connect to each other.” “Chorus” is going to be released later this year on the WITHIN app.

The real-time installation “VR_I” is a collective contemporary dance experience created by the Swiss artistic director and choreographer Gilles Jobin along with Sylvaian Chaqué and Caecilia Charbonnier from Artamin, an organization specialized in motion capture. By mapping the body of the users through infrared cameras that follow the trackers located on their feet, hands and a computer backpack, each of them get to personify the avatar of one of the five real dancers that were created by a careful 3D rendering scan and motion capture systems.

In contrast to WITHIN projects, in this installation, the participants share the physical space and the interactions they have in the concrete place are mirrored in the virtual environment. The users are encouraged to interact with each other, hold hands, form a circle and dance, while they are transported to different places by giant virtual dancers, going from the interior of a mineral cave, the middle of a desert landscape, a modern loft on top of a hill, to an urban park full of dancers. The sound and music emerge from the encounter of each participant with the different environments and objects, and each person gets an individualized soundscape.

In an attempt to counter the traditional depictions of Islam by shedding light on Sufism, one of its mystical branches characterized by its inclusive communitarian nature, the VR documentary “Zikr: A Sufi Revival” submerges the participants into the thoughts and rituals practiced by a Sufi community in Tunisia. The installation was placed in a room furnished with Tunisian carpets, where four participants stood in a circle. In the virtual space, they could visualize each other’s hands connected through a chain of prayer beads that they could move. In a mix between 3D render individual interviews recorded with a Depthkit and 360 videos of different ceremonies, the users got close to the beliefs of different members of this community and join the the ecstatic music and dance by dancing and playing the instruments and other elements that appear in their virtual hands by pressing the Vive controllers.

For the director, Gabo Arora, a renowned VR creator with projects such as Clouds over Sidra and The last goodbye, the hope is that Zikr, “with its unprecedented level of engagement and interactivity, will allow for a more meaningful connection to Islam that goes beyond empathy and tolerance”.

This piece was acquired by Dogwoof, becoming the first VR documentary to be purchased at Sundance. This not only ensures its distribution but it also supports additional development including a web VR version where people from around the world will be able to collectively experience it.

By placing the viewers in particular situations, these three VR pieces motivate the collective engagement and agency of the persons, guiding them to explore, be part and create the worlds and its narratives. But for now, the kind of interactions proposed are rather basic, grounded mainly in choreographic movements. The environments and narratives are pre-defined, thus the possibility for the users to affect these worlds is minor, and so it is the option of connecting with each other through a creative process. Even more so if you are embodying an avatar completely different from yourself and, in the meantime, trying not to get dizzy. In spite of the emergent state of the medium, the future of VR seems to be social. Not only narrative VR projects are being developed but also investment is being placed in the advance of social network VR platforms such as Facebook’s Spaces launched last year, the acquisition of the social VR start-up Altspace by Microsoft, and Mozilla development of a web-based social VR. VR is starting to leave its isolation state and transitioning to a communication tool that could be embedded in our daily lives in a not so distant future.

So now we should be asking ourselves what are the kind of connections we want to experience in these social virtual spaces? We should also beware of repeating the same “empathy machine” discourse by thinking that this social side of VR will be the real way of engaging the public, since the characteristics of the medium matter less than the projects or processes being developed. One unfavorable case was Facebook founder Mark Zuckerberg’s virtual trip last year to Puerto Rico after Hurricane Maria via Spaces, which was met with harsh criticism.

In contrast, projects like “Family Reunions Project,” which uses VR to connect separate members of immigrants families that otherwise couldn’t meet, might be greatly benefitted from this type of technology, since the relations they promote are based on a profound process of engagement that goes beyond VR. That is to say, the social aspect of social VR does not lie on the collective multi-participant virtual encounters, but on the ability of a particular VR project to emotionally move and connect participants with each other and with the worlds they present.

The three Sundance social VR installations are exciting examples of what it is about to come, but we should take a critical approach to this term and its implications.

Josefina Buschmann is a documentary filmmaker and a researcher at MIT’s Open Documentary Lab.

This Article is related to: Film and tagged Sundance, Virtual Reality, VR