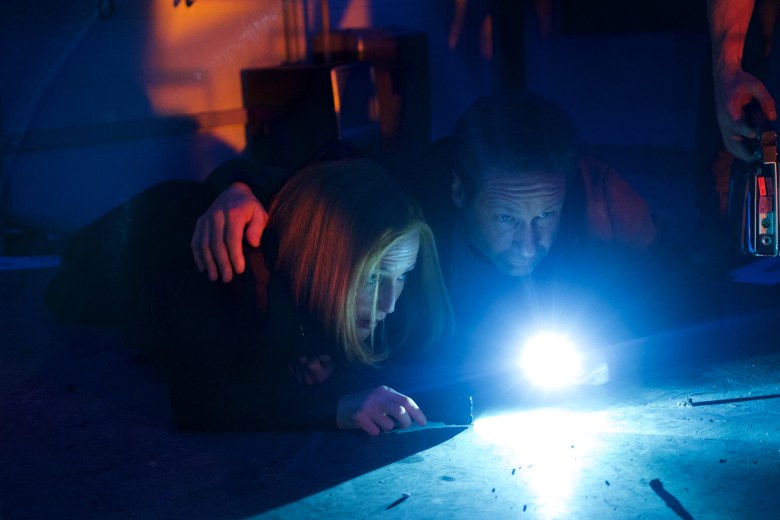 FBI Agents Mulder and Scully have a history of investigating weird crime together, as well as a personal relationship that defies conventional classification, but after over two decades, means a degree of unspoken communication.

Remember when Microsoft created a chatbot in 2016 that became “a Hitler-loving sex robot” after 24 hours online? This episode’s cold open sure does, using that particularly bad experiment in artificial intelligence as an opening parable for this anti-tech hour.

It’s date night for Mulder and Scully at a fancy high-tech sushi restaurant — so high-tech that Mulder and Scully are the only humans there, with the food being served and prepared by robots. When Mulder’s order comes out wrong, he gets annoyed, so he decides not to tip the sushi robots.

When Mulder and Scully part ways to return to their respective homes, the technology they use to do so starts off as annoyingly buggy and escalates to downright deadly. A self-driving car takes Scully on a nail-biting ride, drones swarm Mulder’s house, Scully’s home security system starts spewing existential messages, and eventually, a gas explosion has our intrepid duo running from all the technology that surrounds them in the modern world… until, finally, Mulder goes ahead and gives the robots a 10 percent tip on that sushi dinner. Retrieving (nearly) all of their personal devices, Mulder and Scully go get some breakfast — and unlike the night before, when they spent more time looking at their phones than each other, they hold hands, in companionable silence. First things first: Let’s do some literal decoding. The episode title, “Rm9sbG93ZXJz,” seems like gibberish, but actually it’s Base64 code (as at least one savvy Twitter user caught in advance), translating to the word “Followers.” This also corresponds with the name of the sushi restaurant Mulder and Scully eat at — “Forowa” is the Japanese Anglicized spelling for “Follower.”

And yes, during the opening credits, that’s more Base64 for you — “VGhlIFRydXRoIGlzIE91dCBUaGVyZQ=”, which does, in fact, translate to “The Truth is Out There.” (One thing that hasn’t been pointed out enough by our reviews this season is how much fun the producers are having with every credits sequence. Every episode has featured some clever twist on the show’s classic slogan.)

Then there’s the actual execution of the episode, which is perhaps the most creatively daring of the season. At the Television Critics Association winter press tour, this episode was teased in advance as a largely silent installment, and what’s interesting is that there’s no plot-driven reason for it, as was the case with the groundbreaking “Buffy the Vampire Slayer” episode “Hush.” Instead, the writing is just incredibly spare in its use of dialogue, letting Gillian Anderson and David Duchovny’s talents shine.

It’s a risk that pays off. Because this show brings out our most nerdy attributes, we made an attempt to actually count how many words were spoken by a human on screen during this episode — leaving out the robots (including the cold open monologue), but including the times Mulder and Scully would shout at their tech. Our approximate total was 260 words over the course of 45 minutes, meaning about five words a minute. By comparison, Mulder and Scully’s first scene in 1998’s “The X-Files: Fight the Future” is about almost exactly two minutes long and contains 400 words of dialogue.

Yet so much is communicated between them, invoking memories of the classic fifth season episode “Detour,” when Mulder tells Scully that they don’t need to attend a teamwork seminar because “we have communication like that — unspoken. You know what I’m thinking.” (Later in that same episode, Mulder turns down the opportunity to drink wine with her in a hotel room, and she muses that “sometimes I think some work on your communication skills wouldn’t be such a bad idea,” but we’ll let that subtext lie.) Final note: Scully’s password for her home security system is “Queequeg” — yet another reference to Scully’s long-lost pet dog (cause of death: lake monster). Which leaves us wondering: What happened to Dagoo?

Look, let’s be clear about this: Just because a woman has a “personal massager” doesn’t mean she’s not getting any action elsewhere. (And mad props to “The X-Files” for daring to acknowledge that Scully is a human woman who is allowed to be a sexual being — for the second time this season!) But, that said, this episode did feature a lot of mixed messages about the nature of Mulder and Scully’s relationship. They’re not living together! But they’re going on dates? And while “Why is your house nicer than mine?” is a fun meta moment from Mulder, it also implies that it’s the first time he’s seen it. Given that she basically seems to sleep over at his place more often than not, based on scenes from “This” and “The Lost Art of Forehead Sweat,” that makes sense, but still, maybe you should come over more often, Mulder…

…Who are we kidding? This is all nitpicking. “Rm9sbG93ZXJz” might be focused, on a plot level, on all the ways we’ve let apps and robots make us more distant, but the entire emotional journey is Mulder and Scully reconnecting for what may be the first time in years. They’re holding hands, you guys. It may not be an on-camera trip to Pound Town, but while they may defy labels, they are together.

At least, for now. Three episodes left this season. Brace for impact.

So… Gillian Anderson got a new wig Scully got a haircut? Okay. Sure. Don’t know if it’s a real improvement over the hair from the first half of the season, but sure. Given the show’s ’90s roots, it’s always been a bit weird to see Mulder and Scully texting and using modern technology (still can’t get over Mulder taking an Uber in Season 10). So this episode was a bit of a shock to the system in this regard, though ended up making a fair amount of sense by the end. After all, Scully’s house having a state-of-the-art security system totally fits her as a character when you consider just how many damn times she’s been attacked by serial killers or mutants in her own home.

Also, the creation of all the fake apps and services was pretty stellar across the board, a credit to the production design as well as touches like having the Whipz rating system be “Poor,” “Middle Class,” “Rich,” or “Ballin’.” That is exactly the sort of rating system a 23-year-old app developer hyped up on Red Bull would come up with.

We’ll use this section to spotlight Crosby, Stills, Nash & Young’s “Teach Your Children,” and congratulate it on joining the ranks of songs like Johnny Mathis’s “Wonderful, Wonderful,” Cher’s “Gypsies, Tramps and Thieves,” Bobby Darin’s “Beyond the Sea,” and The Platters’ “Twilight Time” in the pantheon of Songs That Now Have a Very Different Meaning for Us Because of “The X-Files.” Boy, that song does not become more enjoyable when played on repeat.

Who needs words, when two longtime companions smile at each other and hold hands? The above episode summary might be the shortest one we’ve ever written, but that’s because, really, how much is there to say? If you were looking for clear evidence as to why Gillian Anderson and David Duchovny are TV icons, here you go: an episode of television where barely anything technically happens, but because of the spotlight on them as performers, even when largely silent, they’re captivating both on their own as well as together. There might not be much substance to “Rm9sbG93ZXJz” beyond its central message, but it’s fun to watch, full of goofy little moments that help give the characters greater definition even in the chaos of the show’s escalating mythology.

This episode perhaps existed in a slightly heightened reality from our own, which feels a bit odd, but also does fit with the vibe of the season. In “Kitten,” we saw the escalation of the conspiracy invade our world, and if anything about Scully’s “visions” regarding the finale turns out to be true, Season 11 could end in apocalyptic mayhem. It means the show feels slightly less grounded than it has in seasons past, but we live in unreal times — that somehow feels right.

The comparisons to “Black Mirror” are hard to avoid, especially given the Season 4 episode “Metalhead,” which was also largely silent and featured a woman on the run from vicious metal dogs. (We’re not accusing either one of ripping the other off, for the record, given filming and release schedules — but it is a funny coincidence.) But one thing “Black Mirror” creator Charlie Brooker has always emphasized about his techno-phobic anthology series is that technology is never the villain — humans are.

It’s a nuance that’s a bit lacking in “Rm9sbG93ZXJz,” except of course for the message that “feedback is how we learn” and it’s up to us, as humans, to guide this technology correctly, and sure, the final resolution was a bit silly. (Seriously, tip your sushi robot!) But while the scares could have been a bit more intense, director Glenn Morgan and writers Kristen Cloke and Shannon Hamblin still managed to deliver a thoughtful, character-centered hour with a lot of charm. The next time you look at your phone, you may find yourself thinking twice.