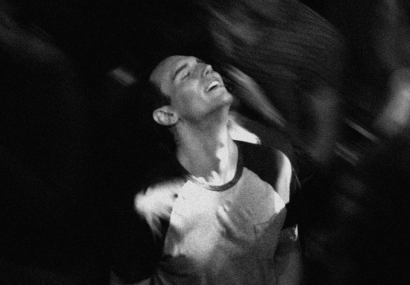 If the Oscars’ shut-out of the French film “BPM (Beats Per Minute)” is any indication, Hollywood is still put off by AIDS films, no matter how brilliant. “1985” is arresting in the same way as Robin Campillo’s epic portrait of ACT UP Paris, though its story is much quieter. Set in Texas, “1985” follows a young man named Adrian (Cory Michael Smith), who returns to his small Texas hometown to visit his family for Christmas. It’s clear in the weighted silences and stilted small talk that Adrian hasn’t kept in close touch with his religious family.

He stands tall over his brusque father (Michael Chiklis) at baggage claim, as they try to remember the last time he was home. His mother (Virginia Madsen) greets him warmly, though her pleading to call up his estranged childhood friend Carly (Jamie Chung) clearly bothers him. His younger brother Andrew (Aidan Langford) is less forgiving of his prolonged absence, at first greeting him coldly and retreating into the comforts of his Walkman.

Sensing an in, Adrian is delighted to learn of Andrew’s affinity for Madonna, instantly impressing him with boasts of having attended The Virgin Tour. Andrew’s walls quickly crumble, and soon the brothers are attending movies together. We learn that the pastor destroyed nearly all of Andrew’s beloved cassettes, and a picture emerges of what Adrian’s childhood must have been like, and why he left. Tightly wound and careful with his words, Adrian is difficult to read; he’s as delicate as the film’s simple yet effective framing.

The sparseness of each frame leaves something for the eye to fill in, just like the bits of Adrian’s life we don’t see. We learn the details of his life in New York through what he shares with his parents, though one gets the sense he is not being entirely honest about that big promotion or the reason he’s taking care of his friend’s dog. In private moments, we see Adrian taking pills before bed or asking the dog if he will outlive him, slowly revealing the real reason for his visit.

The film is shot in black-and-white, a simple yet effective way to signal the past that also creates a sense of walls closing in. Writer-director Yen Tan renders Adrian’s world with understated intensity; each frame feels so precise, as if the scenery is holding its breath along with Adrian. Every silence, every space left open, echoes the liminal moments between what the characters say and what they mean.

Smith is easy to watch, pensive and handsome in a classic Hollywood way that works in the period. Film audiences may recognize him as the private detective in Todd Haynes’ “Carol,” another LGBT period film. He has an easy chemistry with the always-excellent Madsen, who adds much to the film while doing very little. The role is quite a shift from her typical feisty character women; she and Adrian both speak with a kind of stilted formality, sounding more like acquaintances than family. Smith is most lively in his scenes with Chung, which prove to be the film’s most moving as well.

Festival audiences may remember Tan for his collaboration with David Lowery, “Pit Stop,” which premiered at Sundance in 2013 and was nominated for a John Cassavetes Award at the Independent Spirit Awards in 2014. Tan shares story credit with the film’s cinematographer, Hutch, and the two edited the film together. As such, “1985” has the distinct feel of being a fine piece of cinematic craftsmanship by two artists with a shared vision. It is a haunting elegy for a generation of gay men.

“1985” premiered at the SXSW Film Festival on March 9, 2018. It is currently seeking distribution.

This Article is related to: Film and tagged 1985, SXSW, Yen Tan