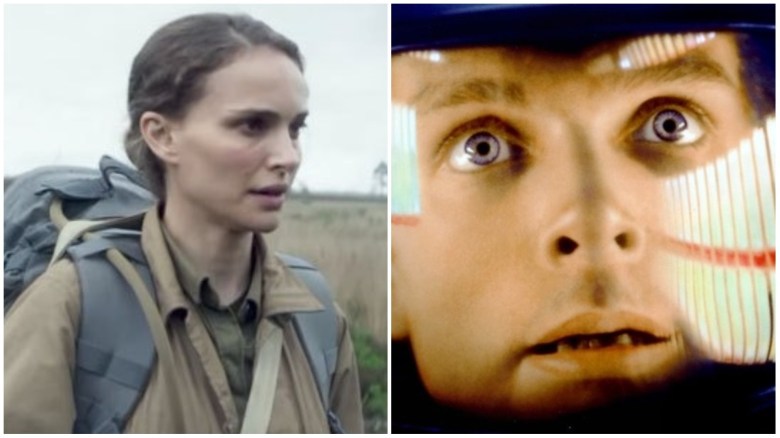 Alex Garland’s smart sci-fi film “Annihilation” inspired a great deal of consternation, but not a lot of box office. More than anything, however, the film’s release may speak more to the impatient state of studio moviemaking.

For some, it showed Hollywood still is unwilling to back genre films with female protagonists, especially the smart, diverse scientist kind. Paramount took heat for cold feet, having unloaded most of the film’s rights to Netflix — reportedly after unfavorable test screenings — and then assembling a half-hearted marketing campaign behind the film’s theatrical release. The Guardian critic Guy Lodge put it bluntly: “Was ‘Annihilation’ too brainy for the box office?”

It’s been 50 years since Stanley Kubrick practically invented the cerebral sci-fi film with “2001: A Space Odyssey,” but does “Annihilation” really prove that modern audiences only go to theaters for spectacle, not for smart? Like “Annihilation,” reviewers in April 1968 said Kubrick’s film was heady, bleak, and slow. However, there were key differences between their releases, all of which boil down to time and patience that today’s studios just don’t have. “Annihilation” was dumped on more than 2,000 screens opening weekend, but “2001” had a slow rollout even by 1968 standards. After mixed reviews and opening-week results in early April (it’s worth noting Martin Luther King Jr. was assassinated that same week), Kubrick sliced 19 minutes from the film. Distributor MGM still stood behind the ambitious project by striking 100 70mm prints across the country, along with key international cities, for a roadshow that stretched into fall, when the film received a wider 35mm release in regular theaters.

Time even affected critical opinion. Although critics and cinephiles immediately praised “Annihilation,” initial response to “2001” was lukewarm at best. Pauline Kael called it “monumentally unimaginative,” the New York Times said it was “somewhere between hypnotic and immensely boring,” and the great Andrew Sarris said the terribly grim film failed because “it is much too abstract to make its abstract points.” Over time, Sarris and others changed their opinions of the film, which would go on to to consistently rank in the Top 10 films of all time.

Finally, “Annihilation” was labeled a box-office bomb after three days in release, making only $11 million in its opening weekend. “2001” slowly built an audience to become the highest-grossing film of 1968, bringing in $57 million — or $397.8 million adjusted, more than “Guardians of the Galaxy Vol. 2.”

So while the response to brainy sci-fi may seem to have changed, it’s exactly the same: These films take time, which the multi-platform world has in short supply. “Annihilation” must compete for an audience with thousands of entertainment options literally at their fingertips, and Hollywood is unwilling to invest time in building an audience.

It wasn’t long ago that “smart” TV series faced a similar conundrum. A show’s fate tied directly to its premiere ratings, followed by the ability to maintain a high percentage of what often was diminishing returns. In the last 10 to 15 years, that patience paradigm shifted from the theaters to the home. When HBO’s “The Wire” (2002) or AMC’s “Mad Men” (2007) faced extremely low ratings and buzz in their first seasons, the networks didn’t blink. They believed the shows would find audiences worthy of them, and were justly rewarded with what became cornerstones to their libraries — not unlike what “2001” meant to MGM. It should surprise no one to learn that Garland’s next heady sci-fi narrative will be found on FX, not the big screen. Natalie Portman and director Alex Garland on the set of “Annihilation”

Content with the potential to be an enormous network hit, or a theatrical blockbuster, has always been finite. Only certain types of shows and movies have concepts that justify the tens of millions in P&A needed to create its largest audience as soon as it opens. As the digital entertainment landscape continues its radical shifts, they only underline something that’s been true since at least 1968: Just because a film doesn’t fit the tentpole model doesn’t mean it can’t be profitable. Can distributors take advantage of this, and build a theatrical model that dares to deviate from tentpole practices? That’s a question for Hollywood, not for the audience.

This Article is related to: Toolkit and tagged 2001: A Space Odyssey, Alex Garland, Annihilation, Stanley Kubrick