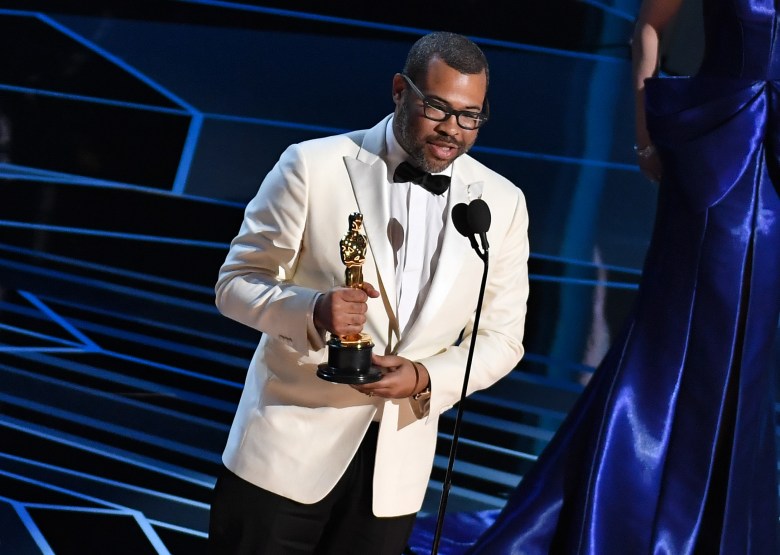 Jordan Peele with his Best Original Screenplay Oscar for “Get Out”

While none of the 2018 acting Oscars were awarded to people of color, diversity and representation remained a theme at the 90th annual ceremony. “The Shape of Water,” Guillermo del Toro’s love letter to anyone who has ever identified as an outsider, won four prizes, including the coveted Best Picture. “Growing up in Mexico, I thought this could never happen; it happens,” he said. “This is a door, kick it open and come in.”

Del Toro also claimed Best Director, becoming the fourth native of Mexico in five years to achieve the feat. Pixar’s “Coco” provided more reasons for Mexico to celebrate, nabbing Best Animated Feature (and a “Viva Latin America!” shoutout from presenter Oscar Isaac) and Best Original Song (“Remember Me”). As “Remember Me” co-writer Kristen Anderson-Lopez remarked of her fellow nominees, “Not only are we diverse, but we are close to 50/50 for gender representation. When you look at a category like ours, it helps us imagine a world where all the categories look like this one.”

The film’s co-director, Adrian Molina, revealed how the Trump administration galvanized the project, a six-year endeavor. “While we were making the film, we had a change in the presidency, and a lot of things started to be said about Mexico and about Mexican-Americans that w[ere] unacceptable,” he said in the press room. “We began to feel a new urgency to get the movie out into the world, to get a positive message about the beauty of Mexico, the beauty of the Mexican people, the beauty of the culture and traditions … and also give Mexico and Mexican-American kids something to look up to, something to aspire to, and [an opportunity] to see themselves up onscreen.” The Oscar-winning creative team from “Coco”

Molina also said that he and his colleagues “worked very hard to show that films about communities of color, films that come from particular places, have resonance that can reach across the world. You’ve seen that with ‘Coco,’ you’ve seen that with ‘Black Panther,’ and I think you’re going to see it with a lot of other films in the future.” A couple generations ago, Rita Moreno won an Oscar for her role in an iconic musical about one such community, “West Side Story;” tonight, she received a standing ovation.

The “Coco” win felt doubly inclusive; Molina and co-director Darla K. Anderson each thanked their same-sex spouses from the stage. At 89, James Ivory — now the oldest Oscar winner in history — also recognized his late producing and life partner of nearly 45 years, Ismail Merchant. While accepting the Best Adapted Screenplay statuette for “Call Me By Your Name,” he called first love “a story familiar to most of us, whether we’re straight or gay, or somewhere in between.”

Fellow winner Sebastián Lelio — who directed the Best Foreign Language feature, Chile’s “A Fantastic Woman” —  championed the LGBTQ community when addressing the press backstage: “A transgender person is not a Class B person, it’s one of us,” adding, “We’re talking about freedom here.” Lelio also advised Hollywood executives to hire Latinos (“Things seem to be changing, so I hope that’s the case”). Daniela Vega became the first openly transgender Academy Awards presenter, and winner Rachel Shenton used sign language to translate her acceptance speech for the benefit of the young, deaf protagonist of her Best Short Film (Live Action), “The Silent Child.” And Best Actress winner Frances McDormand, who had every female nominee in the Dolby Theatre stand; backstage, she told the press that African-Americans weren’t “trending,” reminding everyone, “‘Moonlight’ won Best Picture of 2017.”

The first African-American to win Best Original Screenplay Oscar (“Get Out”), Jordan Peele, explained to reporters backstage that he almost didn’t enter the entertainment industry “because there were such a shortage of role models … because I didn’t believe there was a place for me.” Watching Whoopi Goldberg take home the Best Supporting Actress award for “Ghost” was “a huge inspiration” for the writer-director.

Thrice-nominated hair and makeup artist Kazuhiro Tsuji, who is from Japan, landed a win in the category with his “Darkest Hour” collaborators. Backstage, when asked about being one of this year’s few Asian nominees, he remarked, “I don’t want to think about [that] I’m a Asian. I’m just doing what I love to do, so I hope they don’t view it that way, because as soon as we start to think [about] what the race that we are [is], it’s not good, it doesn’t work that well.” Actress-presenters also followed the precedent set by Natalie Portman and her “here are the all-male nominees” quip at the Golden Globes. Sandra Bullock introduced the Best Cinematographer nominees as “four men and one trailblazing woman” — Rachel Morrison, the first female ever to be recognized in the category — while on the subject of Best Director, Emma Stone explained, “These four men and Greta Gerwig created their own masterpieces this year.”

The all-white Oscar nominations of 2016 inspired the hashtag #OscarsSoWhite; in 2017, seven non-Caucasian actors received nominations (and Mahershala Ali and Viola Davis won). This year, the number dipped to four (Mary J. Blige, Daniel Kaluyya, Octavia Spencer, and Denzel Washington). Nonetheless, Tiffany Haddish joked that when she walked onstage with co-presenter Maya Rudolph, “We know some of you were thinking, ‘Are the Oscars too black now?’” “I remember a time when the major studios didn’t believe that a woman or a minority could open a superhero movie,” said host Jimmy Kimmel, referencing recent worldwide juggernauts “Wonder Woman” and “Black Panther,” which just topped the U.S. box office for its third straight weekend. “And I remember that time is because it was March of last year.” Yet now — particularly after hearing McDormand’s speech, “I wish I was a woman, I really do.”

This Article is related to: Awards and tagged Coco, Get Out, Oscars