Jimmy Kimmel avoided anything close to Envelopgate Part II, but a long show only reminded viewers his name shouldn't have been announced this year. 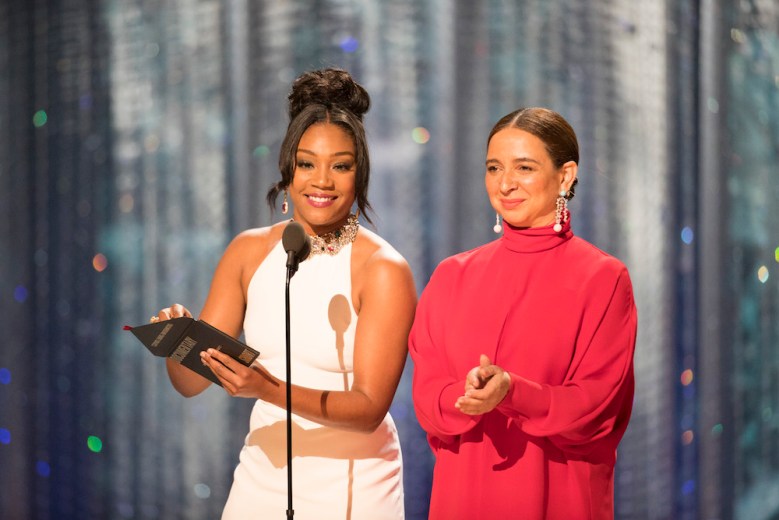 Warren Beatty and Faye Dunaway returned. They opened the envelope. They read the winner. All was like it was last year — or, like it should’ve been. Except, everything wasn’t the same. In 2017, Hollywood was still reeling from the 2016 election. This is 2018, and the focus in Hollywood is now on forward progress; on the #MeToo movement and gun control; on the first black filmmaker winning the Best Original Screenplay category and the fifth woman to be nominated for Best Director; on diversity first and “inclusion riders.”

Having Beatty and Dunaway back for a Best Picture redo is fine. Having Jimmy Kimmel back as host is fine, too, but far less necessary. He had nothing to make up for, and the ceremony (as well as those watching it) could have benefitted from a new host behind the mic. Perhaps Tiffany Haddish, Maya Rudolph, or even LaKeith Stanfield — as if the producers would ever dare take such a risk — would have delivered a more powerful show. One that wouldn’t have felt nearly four hours long (even though it was); one thoroughly unforgettable instead of sporadically memorable.

After making his first of many “Black Panther” references in the black-and-white retro introduction — if the Oscars don’t nominate fan favorites, you can be damn sure the host will talk about them (because, ratings) — Kimmel took to center stage to talk about, what else, last year’s monumental Best Picture flub. Getting it out of the way early was a good choice, though back-to-back jabs at the accountants felt excessively negative on a night about taking positive steps. Kimmel then shifted focus to the Oscar statue, making it two 2018 award shows in a row where the host did an extended bit on a trophy. Kimmel’s was slightly better, especially his pun on “statute of limitations”: calling the Oscar statue and its respectable demeanor a “literal statue of limitations.” And with a decently uncomfortable joke about women being harassed outside the workplace, Kimmel segued to Harvey Weinstein. After noting that the Academy expelled the former winner, Kimmel pointed out that the only other Academy member to be expelled was Carmine Paretti, who shared screeners in 2004, meaning he “got the same punishment as Harvey Weinstein for giving his neighbor a copy of ‘Seabiscuit’ on VHS.”

Credit for doing your homework, but it’s not a great joke and certainly not enough to make up for the tired one preceding it, circling around how Mel Gibson used to be a sex symbol, but now women don’t want him. (I mean, no one should, right? Not just women?) The better joke would’ve been that Hollywood is still clueless because they a) nominated Gibson for Best Director last year, and b) gave him a surefire box office comeback in “Daddy’s Home 2.”  However, tonight was not a night for decrying the Oscars or Mark Wahlberg.

It was at this exact moment in Jimmy Kimmel’s opening monologue — between talking about women (getting sexually harassed “everywhere else they go” beyond work) and minority representation (Oscar nominees getting “crushed” by “Black Panther”) — that it became clear someone else should be hosting this year’s Oscars. Be it Allison Janney, who’s comedic beat after “I did it all by myself” during her acceptance speech was absolutely perfect, or Kumail Nanjiani, who read the room beautifully while fans cheered for Kenyan Lupita Nyong’o and then delivered a solid line about his real name being “Chris Pine,” or let Tiffany Haddish officially take over (she pretty much did, anyway), Kimmel just didn’t belong at the center of this celebration.

That being said, Kimmel’s monologue worked best when he was sincere. Whether he was calling on speakers to say whatever they want — including a notable reference to the March for Our Lives event on March 24 — or taking note of the important shifts in Hollywood’s attention, it felt like he really wanted to pay heed to what’s going on in the world. Kimmel knew what that night meant to people, and he did his best to honor those who cared the most.

His jokes got better as his the ceremony went on, starting with his last big swing during the monologue: giving away a jet ski to the winner with the shortest speech. At first, the offer (featuring a disappointingly silent Helen Mirren) felt crassly out of place — why reference “The Price Is Right” on ABC, and why reference “The Price is Right” at all? Yet as the night ran on, the bit was welcomed by awards recipients (Sam Rockwell referenced it right from the start) and brought back up about halfway through when Kimmel “sweetened the pot” with a trip to Lake Havasu and lodging at Days Inn. More importantly, Kimmel flexed his potency in small doses. “If your speech is too long, you’ll hear” — (cue LaKeith Stanfield screaming “Get out!”) was the perfect use of Stanfield at the Oscars, and “Tonight’s nominated documentaries show us that where there is darkness, there is also hope. Except at the White House. Hope quit on Wednesday.” That’s a good joke delivered very, very well. (The pauses!)

As for his biggest (and possibly most controversial) swing — the trip to the movie theater — in an industry with lagging ticket sales, does too much thanking the audience reek of desperation? Does the “stunt” play as a reversal to Kimmel inviting unsuspecting tourists into the Oscars theater? Does it lower the prestige factor of Hollywood’s most prestigious night? The same answer applies: No one should care, because it’s absurd and delightful. (Also, the desperation turned sincere the moment Jordan Peele dedicated his Original Screenplay Oscar to those who made his movie and those who saw it.)

Because the show strived for better than just stupid fun, one segment delivering it in endlessly gif-able spades is A-OK. The clips (long live the clips) were a sincere effort to honor 90 years — 90 years — of movies; the #MeToo video blended beautiful messages with cutting humor (highlighting Nanjiani’s talents yet again); human moments abounded during the Best Song performances, from Mary J. Blige’s closed eyes to Keala Settle’s voice crack.

And then there were the speeches. Though Kimmel’s jet-ski bribery didn’t keep the show short, the speeches were largely worth the time. Even the predictable winners in the acting category didn’t make for a dull evening, especially when Frances McDormand used her time on stage to honor all the female nominees in the room and demand they be taken seriously. “I’ve got some things to say,” McDormand began, before asking every woman nominated to stand and be recognized.

She brought down the house. “I really hope Frances McDormand wins an Emmy for the speech she gave at the Oscars,” Kimmel said. “I wish I was a woman, I really do.” If there was any doubt Kimmel knew he might not be the right person for the job so much as the person chosen, it was erased with that line. Blaming him would be pointless. But as he and many others stated from the stage, recognition matters.

This Article is related to: Awards and tagged Academy Awards, Jimmy Kimmel, Oscars