They'll kill you if you make a sound in this innovative survival story from actor-director Krasinski. (Who knew?) 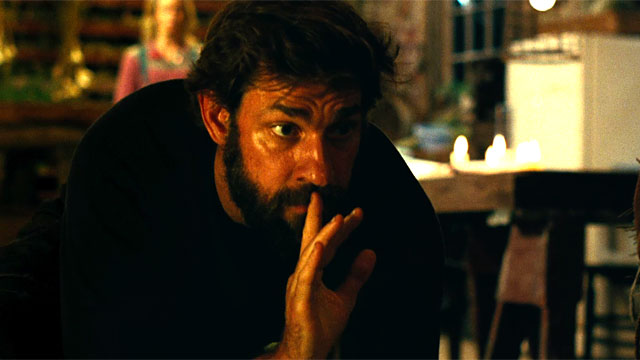 “A Quiet Place” develops its horrifying premise around a gimmick perfect for cinematic storytelling — in a post-apocalyptic countryside, monsters are drawn to their prey by sound, so human survivors can barely exchange more than whispers. Directed with first-rate visual flair by John Krasinski (who knew?), this riveting near-silent thriller exudes the despair of a broken world with the concision of a Cormac McCarthy novel folded into a simplistic B-movie premise. Utilizing the pure physicality of a cast you can count on one hand, the movie maintains a minimalist dread throughout, with every footstep or sudden move carrying the potential for instant death.

“A Quiet Place” establishes dread from its opening minutes as dirty feet tiptoe through a dilapidated grocery store and a nameless family searches for supplies. Two children follow the lead of their stern father (Krasinski, bearded and downbeat), while their mother (Emily Blunt, whose sensitive gaze regularly shifts from gentle to frantic) hovers nearby. On the road, a sudden noise beckons the blurry arrival of a CGI critter and a tragic twist as the title card arrives. The stage is set for a movie told almost entirely through bursts of anxious (and subtitled) sign language, ominous pauses, and fretful stares. On closer examination, it’s also a fairly routine sci-fi survival story in fancy packaging, replete with annoying jump scares and obvious familial dilemmas — but as a studio-produced genre offering, it’s a welcome alternative.

Some time later, the family is at a remote farm, surrounded the green hues of corn husks and lights that stretch out across the field. That’s where the story’s real star comes to the foreground: Millicent Simmonds plays the oldest daughter, and the real-life deaf actress follows up her star-making turn in Todd Haynes’ “Wonderstruck” with another marvelously subtle performance. Here, she’s at odds with her protective father, who insists she remain at home with her pregnant mother while he takes her younger brother (a superb Noah Jupe, Matt Damon’s son in “Suburbicon”) into the woods to hone his survival skills. Simmonds’ character won’t have it, and her mounting desire to take control of the family’s situation sets the stage for a series of gesticulation-filled confrontations.

An early development sets the stage for the possibility that anything could go awry, and once the movie’s rules set in — scream, stumble, or drop something and you’re basically screwed — each scene is thick with foreboding. The glimmers of monsters make the most of a visibly modest budget, but when they finally enter the frame they don’t disappoint, with Industrial Light and Magic doing its usual wizardry to deliver sufficient creature-feature chills. These ghoulish, hulking insectoid creations suggest equal parts “Alien” and “Jurassic Park,” which is to say both derivative and grotesque enough to make the simple threat hold tight. (“IT’S SOUND,” announces the headline on a frayed newspaper, and that’s basically all you need to know.) For a movie with such sparse dialogue, “A Quiet Place” often gives way to annoying bursts of shrieking strings to jolt its audience, as if they can’t be trusted to find the disquieting mood sufficiently freaky. (It’s almost like producer Michael Bay kept turning up the volume, before Krasinski could bat his hand away). Thankfully, Marco Beltrami’s score largely sticks to a low rumble that hovers on the same wavelength as the characters’ unease. While their relationships are crudely drawn, they retain  an elevated quality within the movie’s unique narrative framework. Danish cinematographer Charlotte Bruus Christensen (“The Hunt,” “Fences”) gives the farmhouse the grimy textures and faded colors of dusty Polaroids, adding to the unnerving quality of a suffocating world. (Think “Signs” without the annoying introspective monologues.)

Aside from hushed exchanges in basements and behind the roar of a waterfall, “A Quiet Place” owes much to its actors’ wordless investment in this tricky material. Simmonds is a particularly emotive performer, and the one-two punch of “Wonderstruck” and “A Quiet Place” ought to stimulate more projects tailor-made for her skills. But Blunt, Krasinski, and Jupe all contribute credible intensity to their scenes with a degree of sophistication rare for this type of material, while the director’s capacity to mine suspense out of inventive scenarios (sinking in a sea of corn, or grasping for a mattress to stifle a baby’s cry) means that every new showdown comes with a few unexpected tricks.

For Krasinski, “A Quiet Place” marks a welcome step away from his other work, both as actor and filmmaker. His talky adaptation of “Brief Interviews With Hideous Men” and mundane family drama “The Hollars” fell short of indicating the markings of a sophisticated filmmaker. Now, Krasinski has found the ideal material for a total reboot, delivering a crowdpleaser where the scares come not with a bang but whispers and silence. In a chaotic information age, it’s liberating to become immersed in a movie where noise can kill you.

“A Quiet Place” premiered at the 2018 SXSW Film Festival as the opening night film. It opens nationwide on April 6, 2018.

This Article is related to: Film and tagged A Quiet Place, John Krasinski, Reviews, SXSW