Richard Spencer stars in a doc that chronicles how America’s white nationalists crawled out of the sewers during year one of the Trump age. 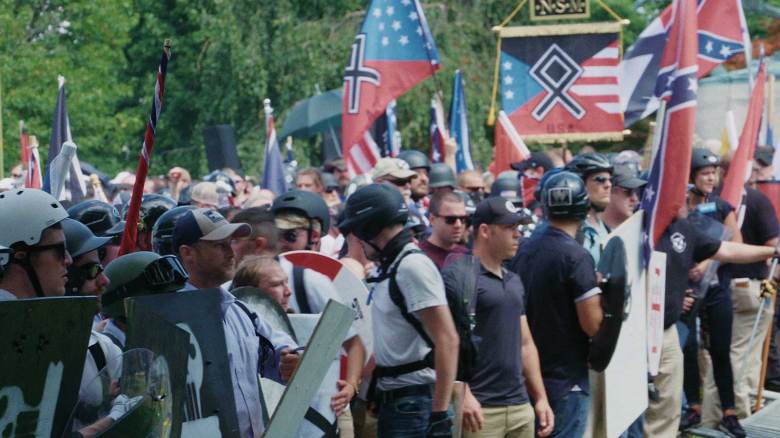 A single, persistent question hangs over Adam Bhala Lough’s “Alt-Right: Age of Rage,” a blunt new documentary that chronicles how America’s white nationalists crawled out of the sewers during the first year of the Trump administration. And the question is this: Do we really need to watch a movie about these assholes?

The most striking moments of Lough’s scattershot new film address that question head-on, weighing — to use terms borrowed from one of the talking heads — the policy of quarantine vs. the policy of inoculation. In other words, does talking about neo-Nazis help expose the flimsy hatred that fuels their ideologies, or does giving oxygen to toxic firebrands like Richard Spencer and Milo Yiannopoulos only make them stronger? The mere fact that “Age of Rage” was shot, and that it possesses the baseline self-awareness required to reflect on its value, is enough to suggest that Lough believes in the former. Of course, it’s possible that a documentary filmmaker may not be the best person to decide if we should point a camera at something awful.

“Age of Rage” works to justify its existence from the start. The context is pretty clear: Opening with alarming archival footage from a 1939 Nazi rally at Madison Square Garden, and a Georg Wilhelm Friedrich Hegel quote from long before that (“We learn from history that we do not learn from history”), Lough posits that since we failed to stamp out ethno-racial nationalism, it might be time to reevaluate our approach. Back in the 1950s, Jewish agencies asked the media not to cover the American Nazi Party, which proved to be a reasonably effective strategy. In today’s world, when someone like Dylan Roof can be radicalized without leaving his mom’s basement, that approach is illogical. It wasn’t feasible before a white nationalist became President of the United States, and it’s sure as hell not feasible now.

So what we do? Well, as far as Lough is concerned, we give these people the attention they want and let them shoot themselves in the foot. Opportunistically framed around last summer’s Unite the Right rally in Charlottesville, Virginia (an event that it builds to like the big game at the end of a sports movie), “Age of Rage” pits the most reviled member of the ethno-state against one of the most outspoken members of ANTIFA.

In the (far) right corner, we have Richard Spencer, the “dapper” white nationalist who’s greatest claim to fame is getting punched in the face. In the left corner, we have Daryle Lamont Jenkins, the black founder of One People’s Project. The movie is rather evenly split between the two of them and their cohorts, though Spencer spends most of his screen time stepping on his own feet. Maybe that’s because Lough is naturally biased against people who want this country to split in two — who claim that America has been taken from them, but espouse values that are inherently antithetical to the idea of America itself — or maybe it’s just because Richard Spencer can’t talk for more than 10 seconds without revealing himself to be an utter tool.

A bit too self-impressed with his intimate access to media-hungry subjects, Lough struggles to find a real structure for his film beyond Charlottesville providing the bookends. “Age of Rage” is much more potent when questioning its own purpose than it is when giving fancy racists yet another platform to espouse their bullshit. Anyone with a healthy media diet already has been exposed to these malignant radicals, and anyone on the planet knows why they’ve been so emboldened in the last couple of years. If you’re unfamiliar with subjects like phrenology, eugenics, or the Partition of India in 1947, this probably isn’t the place to learn about them.

But if each of the film’s parts makes it hard to understand who Lough is trying to serve on the whole, there are some interesting ideas that snake their way through this hateful parade of interview subjects. One notion that continues to resurface is the efficacy of violence in — or in retaliation to — a radical political movement. “I can’t recommend violence enough!” grins Gavin McInnes, Vice Media co-founder and owner of the world’s saddest handlebar mustache. That debate is horrifyingly manifest in the Charlottesville rally, a dreadful event that Lough serves up with the discomforting sort of you-are-there immediacy that’s a bit too real for the news networks.

The footage that Lough sources from the Unite the Right nightmare is harrowing enough to suggest that “Age of Rage” might have been more effective had it exclusively focused on the event. No matter how inured we now are, there’s something undeniably sobering about seeing this racially motivated violence up close, just as there’s something to be learned from how poorly the Charlottesville police (and, uh, the President) responded to it.

It’s impossible to reason with hateful young “American History X” wannabes, and seeing Lough edit them into conversation with people on the other side of the spectrum only reinforces that fact. If his documentary is ultimately more than a future time capsule, or a redundant wake-up call, or even an inadvertent recruitment tool — if we do need to watch a movie about these assholes — that’s because the only thing worse than shining a spotlight on white nationalists is letting them control the narrative.

“Alt-Right: Age of Rage” premiered at SXSW 2018. It is currently seeking U.S. distribution.

This Article is related to: Film and tagged alt-right: age of rage, Reviews, SXSW