From reality competition shows like "Top Chef" to high-brow scripted series like "Treme," television has figured out how to make us crave the food we see on screen. 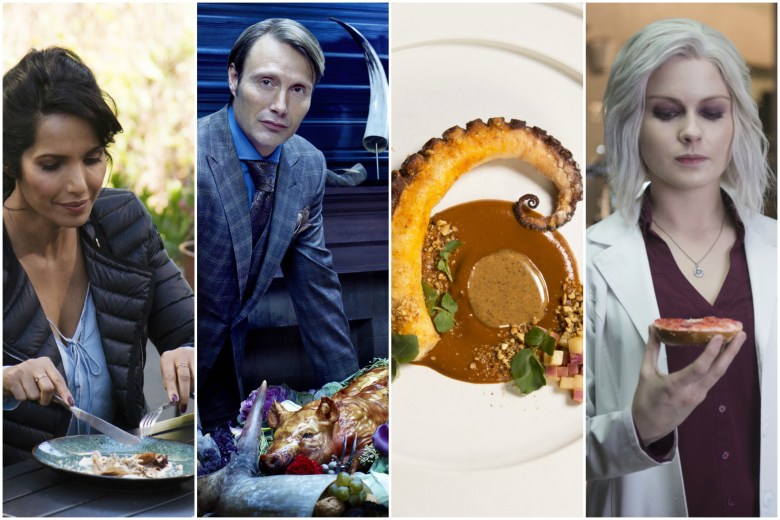 One of the toughest things to pull off in a visual/aural medium is communicating other senses, especially when it comes to food. You can look at a picture of a hamburger and know it’s a hamburger, but it takes a truly talented photographer to capture all the qualities that make a hamburger delicious without involving smell, taste, or touch.

However, across both the scripted and unscripted realms in television, a number of series have tackled that challenge — often surprisingly well! But it’s hardly a surprise as to why so many shows focus on our obsession with the culinary arts: Of all the human experiences you can portray on screen, eating is easily the least controversial and the most universal. And sometimes it can make for truly delicious TV.

“At Home With Amy Sedaris” “At Home With Amy Sedaris” covers a wide array of essential homemaking solutions, from how to spice up your sex life to how to run an efficient book club to how to go about interstellar travel, but food is always at the center of it. From the very first episode titled “TGIF” — “Thank God It’s Fishday” — Sedaris has presented a number of colorful recipes and even more colorful scenarios in which you’d use them. For instance, fish might be a “strange, cold-blooded, and limbless creature that thrives in the stuff we drown in — a thing of nightmares” even — but it’s the perfect meal for sexist businessmen who just want a good meal after a long day of cheating on their wives. Even with unappetizing guests, Sedaris’ plated courses always look (and presumably taste) divine. Many shows have lovingly captured the art of making food on film before, but few TV shows turned the kitchen into art quite the way that David Gelb’s series has for Netflix. To do it on a global scale, to incorporate chefs across five different continents and to justify its own spinoff (“Chef’s Table: Pastry”) speaks to the versatility of a pristine approach to preparation and presentation. As a result, it helps put noted figures in the culinary world front and center, appreciating the artist as well as their plated canvases. (And if anyone wants to grab us a table at Mozza, that would be great.)

Perhaps the food became secondary in this IFC dinnertime series of conversations hosted by director Jon Favreau. But it’s hard to imagine that the show would have been the beloved collection of conversations that it became without that calming, relaxing dinner table setting in between wine and entrees. Favreau and an impossibly long list of guests from the comedy and acting worlds talked about some of the biggest issues facing the business and so much more. The show ran for an impressive 48 episodes (and is streaming now on Netflix), but the format is so universal and Favreau was such a capable and willing host that it’s surprising this has laid dormant for the last decade and a half. When “Documentary Now” turned its eye for unscripted parody to “Chef’s Table,” it could have been vicious. But the tale of a very remote Colombian restaurant with a very limited menu actually turned out to be a pretty sweet family story, with cinematography that did its source material proud. And that’s while filming literally only chicken, rice, and bananas — things you might not even think you’ve been craving until you watch, but then… mmmmm. Even the plain rice, topped with a small dab of butter, looks appealing. After all, sometimes the most simple ingredients can be the most delicious, especially when prepared with the attention to detail depicted here. You might have noticed a phenomenon emerge when attending potlucks or other social gatherings with friends a few years ago. Your friends may have started showing up with elaborate cakes, pies, and other baked treats, on a level beyond what they might have tried before — they’d been watching “The Great British Baking Show.” The BBC reality competition series (later distributed in the U.S. on PBS and then Netflix) proved to be a gem of an unscripted series because unlike other reality competition shows, “GBBS,” especially in its early seasons, is known for its genuinely good heart. In fact, the judges (especially original judge and icon Mary Berry) are far more inclined to offer praise than criticism, creating an environment that truly celebrates the joys of cooking. It’s proven to be a real inspiration for those who want to bake — and also to eat. To describe the delicacies in “Hannibal” as “mouth-watering” is a bit off-putting in and of itself. After all, most of what the not-so-good doctor is dishing up should not be eaten, let alone prepared in the first place. But damn if food designer Janice Poon didn’t make us want to throw our moral compass out the window and dive into those delectable dishes. Extensive insights into her work can still be found on the Feeding Hannibal food blog — which now also includes posts on “American Gods,” her most recent collaboration with Bryan Fuller — for anyone who wants to know how to make the meals sans human flesh.

We know, we know. How can a bloody show about zombies possibly make someone hungry? Blame Rob Thomas and Diane Ruggiero-Wright, the evil geniuses behind CW’s action-comedy, loosely based on the comic book of the same name. Rose McIver plays Liv Moore (get it?), who got turned into a zombie and now works in the morgue in order to access victims’ brains as a source of food. Sure, she’s also a crime fighter and stuff, but we’re here to talk brains to fill our bellies.

“iZombie” took the cue of viral quickie how-to videos and created its own sped-up recipe sequences to demonstrate the myriad ways to cook brain. Stir fried or sauced seem like the most solid bets, and wine or beer pairings with acidity seemed to work best. “Beauty and the Beast” can keep their grey stuff (although we hear it’s delicious). This show gave us a hankering for grey matter. Take a look at a sample of the recipes below:

Page 1 of 3
Continue Reading: The 20 Most Mouth-Watering Food TV Shows of the 21st Century

This Article is related to: Television and tagged Chef's Table, Hannibal, Top Chef