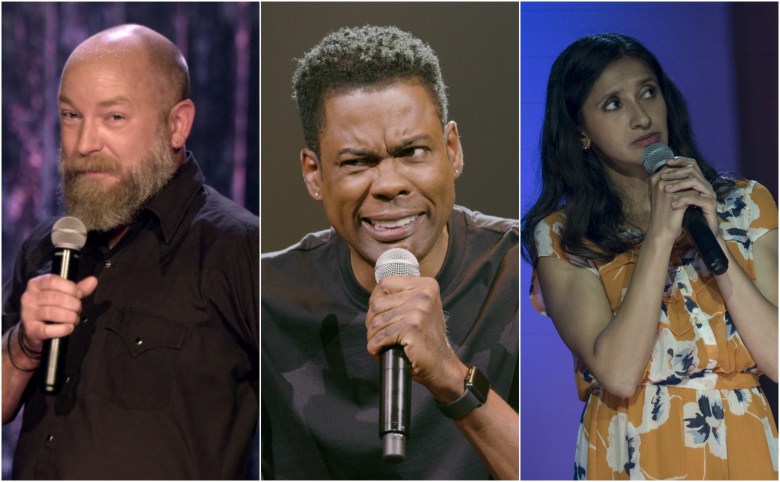 Armisen’s special seems less like a standup set than a featured guest speaker spot at a drum gear convention. There’s definitely still some musical comedy in this, especially when he shows off his journey-through-the-decades drum demo skills. In some ways, it feels like a bigger meta-joke about the Netflix targeting algorithm, an experiment to see if humor can be so micro-targeted while still offering something for everyone. Sprinkled throughout are some other fun bits, including a pre-recorded segment with Sheila E and Armisen’s dissection of accents from the Eastern seaboard through to the West Coast. It ultimately feels like a novelty only Armisen could whip up. Even if the rhythm is hard to follow sometimes, it’s a tiny bit miraculous that it exists.

One Joke Worth Watching For: Armisen recreating the look of one of those time-lapse decomposing animal videos certainly has nothing to do with hi-hats or backbeats, but few other comics can writhe on the ground in as oddly accurate a way. Some comics use shouting as a crutch. Greg Davies uses it like a paintbrush. More stories than concepts, “You Magnificent Beast” lets Davies unashamedly mine his own outrageous experiences for material. With some genuine moments of self-reflection nested in among the crazy tales of disastrous first dates and beloved children’s toys, Davies has a great sense for rhythm, trailing off at the end of a handful of bits before lunging back for the final laugh. Davies also isn’t afraid to let the audience be part of the show, terrorizing a few unsuspecting front row folks in the process. Even when he manages to bring his own mother in on the act, he gets double mileage out of winking at his own tendencies to build some of his best stuff around the things that happen to others. It’s one case where “You had to be there” need not apply.

One Joke Worth Watching For: Davies gets a little assistance with his final bit — watching the looks on everyone’s faces as it builds to its conclusion is a silly, sweet slice of absurdity. Few people on this list immediately command the audience’s attention quicker than Yashere does. With little preamble, she jumps straight into a half hour that never loses steam. Racism, afterschool activities, and pharmaceutical side effects all get a fresh view from Yashere’s perspective as a Brit living in America. Without letting the momentum of her set slide, Yashere’s able to confront narrow mindsets beyond just Hollywood and how that’s affected the choices she’s made in her career in a new country. Sure, she recycles a “Team America” song as a runner, but like a lot of the other stuff in this half hour set, she keeps everyone on edge of her seat by completely making it her own.

Joke Worth Watching For: From her talk about being blindsided by rent prices to a sincere, snowballing list of all the ways it’s a dirty city, Yashere talking about New York is a particular delight. This half hour set is a great example of a performer using every tool at their disposal. Nancherla has long been a fantastic Twitter follow and did some incredible voice acting work in last year’s season of “BoJack Horseman.” So, once she gets past the first half of an already entertaining set (her small-scale approach to absurdity really works), Nancherla gets to take advantage of both of those non-standup skills for one of the funniest PowerPoint presentations you’ll see. In less-capable hands, dissecting emoji or recapping text threads would seem like a cheap shortcut. But Nancherla sells every bit with a clicker in her hand, particularly when breaking down one egregious OKCupid message. You’ll never look at one-star Yelp reviews the same way again.

One Joke Worth Watching For: Aside from breaking down her parents’ texts, Nancherla’s description of what it feels like to wake up from a nap is especially accurate. Most standup specials draw their strength from precision, of seeing people so in control of how to hold an audience. There’s something fascinating and anarchic about the way that “Act Happy” never stays in one place for more than a minute or two. Between the on-stage band heckling Glass mid-joke and a rapid-fire series of joke alts about getting into an accident with a food truck, this is controlled chaos of the most entertaining kind. The icing on the cake is a final five minutes of a righteous fury against people who usually direct their righteous fury at people just trying to live their lives. It’s a literal and metaphorical mic drop that should be required viewing for not just anyone who wants to become a standup someday but anyone who wants wants to just be a decent human being. “That’s how you close a show,” Glass announces to the room at the end. He is not wrong.

One Joke Worth Watching For: Glass leads the audience in a non sequitur chant against another notable comedian with a Netflix special. It’s never addressed anywhere else and given no preamble whatsoever. It’s an inside joke that works completely on its own even if you’re not privy to who or why it’s being directed. Chris Rock doesn’t have to be in the Chris Rock business anymore. In the world of standup, there are few heights left for him to reach. “Tamborine” is a reflection of a comedian at a stage in his career where the best thing for him to do is to scale down the global domination ambition of many of his stadium-sized specials. More humbled, more introspective, and more willing to consider his audience, Rock veers away from razor-sharp political swipes to a grounded, personal perspective of someone who’s seen disappointment and largely come out the other side. With some fantastic direction from Bo Burnham, these stories of divorce and privilege and family take on a different atmosphere than anything Rock has done before. The result is something that isn’t an obvious fit for 2018, but still feels like something that came along at just the right time.

Joke Worth Watching For: The mini-jam that Rock sings when describing the metaphor behind the show’s title will be stuck in your head for weeks. Given what he’s trying to explain in that moment, that’s probably by design. Even within a tight half-hour confine, Kinane manages to wield every weapon in his comedy arsenal, from lavish hypotheticals to pure storytelling. How many other standups could succinctly capture the anxieties of the times by using a phrase like “flies have been landing on me with alarming confidence” and not miss a step? Taking the idea of societal expectations head-on in a way that feels honest and not performatively rebellious is a lot of what’s missing from specials that try to engage those same ideas. Most importantly, Kinane’s episode of “The Standups” is the best example of someone acknowledging the worst parts of society, while still giving people something to laugh at, laugh with and have hope that the laughs will keep coming. It’s physical without being goofy. It’s thoughtful without being overwritten. And it’s all delivered in a metaphorical and literal voice that comes from someone in complete control of what he’s doing.

Joke Worth Watching For: The idea that choosing to recycle is the unseen indicator that not all hope has been lost is the perfect jumping-off point for what life would be like if we really decided things were never going to get better.

This Article is related to: Television and tagged Chris Rock, Fred Armisen, Netflix