"Billions" may never top its big Season 2 shakeup, but it's still seeing benefits in a smooth (perhaps too smooth?) Season 3. 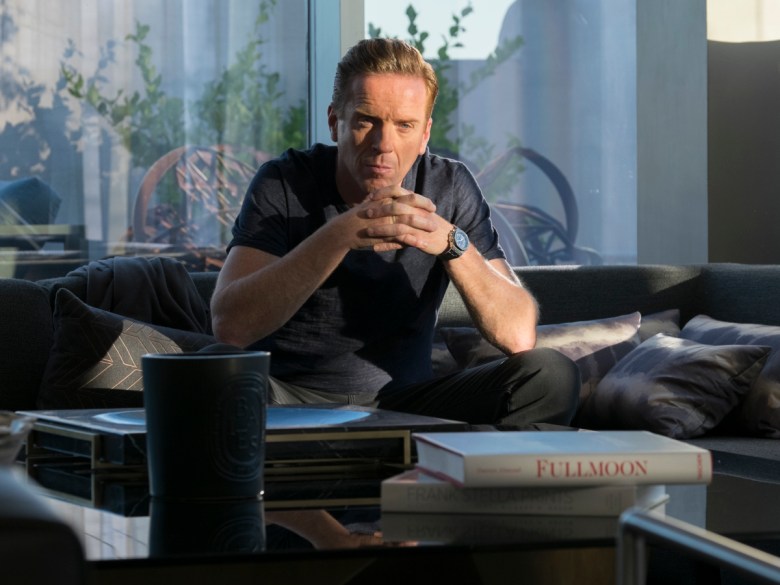 It all started — or ended — with the reveal of Paul Giamatti’s laughing mug. In the penultimate episode of Season 2, “Billions” pulls off one helluva hoodwink: “Golden Frog Time,” the series’ most deliciously effective hour yet, convincingly fools the audience through a series of flashbacks and setups, that the great Bobby Axelrod (Damian Lewis) has pulled one over on his nemesis, Chuck Rhodes (Giamatti). Finally, after years at war with each other, the death blow has been dealt and the tip of the spear is skewering Chuck so painfully, he’s weeping. He’s a broken man, head in his hands, sobbing like someone who’s lost it all.

But he’s not crying; he’s laughing. And he didn’t lose everything; he took everything from Axe in a devilish long con that put the handcuffs on a trader he’s been trying to prove guilty for longer than the show has been airing episodes. It was a climactic moment not just for the season, but also the series, and it unfolded in intense time-jumping fashion that kept viewers guessing until the end.

In Season 3 (two episodes later), “Billions” is still benefitting from that mic drop moment; the question is if it can do it again, let alone surpass it. Hour-long arcs focus on Axe trying to learn who he is after being arrested, what kind of person he could be without his job, and whether or not that’s acceptable. Chuck is trying to drive the stake home — keeping Axe from wriggling out of the trap he so carefully set. A day in court looms, as does another verbal assault in the season finale between these two monetary titans. The ground has shaken and the aftershocks are keeping things mighty interesting through five new episodes.

Still, when one earthquake occurs, it’s only logical to expect another. Season 3 operates efficiently. There’s lots of Pearl Jam-era music cues, ostentatiously fancy locales, and such an onslaught of analogies, one wonders if any of these characters know how to tell a story plainly. (The first scene starts on Chuck walking down a hallway, dramatic music blaring behind him, but chords abruptly end the second someone starts into a simile.) In other words, the passionate fan base allotted behind “Billions” should be happy. But can they expect another monumental shift in Season 3? Can a show that went from “OK” to “damn fun” take another step forward? The odds are better than one in a billion — perhaps far better, considering how well the show surpassed expectations by the end of Season 2 — but there are no new reasons to believe. Multiple episodes in the first five replicate the formula of the show’s best hour, with less impact. One starts with the ending and works it way back in time to explain how we get there. Another uses Axe’s imagination to show various scenarios before revealing which one actually happened. Both operate under the same guessing-game style back-and-forth that made “Golden Frog Time” sizzle, but both feel predictable in comparison. They work. They get the job done. But there are no tremors.

What’s there can be fundamentally compelling and opaquely peculiar. Axe and Chuck are always good for a few enthralling speeches and gleeful quips; just look to the two pros playing them. Lewis remains a riveting central figure, even as he rarely moves outside his steely, gravel-voiced comfort zone, and Giamatti brings more nuanced gestures, glances, and telling silences than the editor can keep up with. The same well-earned watchability follows Maggie Siff and Asia Kate Dillon, who stand out even in an uncommonly strong overall ensemble.

But there are also fun recurrences to read into. For instance, two men flaunt their fully exposed privates to the same man, and both times the dick-measuring challenge is extended as a “fuck you” to the rattled observer. Is this some sort of commentary on the toxic masculinity simultaneously embraced and mocked in “Billions”? The audience is exposed to the dangling wangs, as well, via multiple full-frontal shots of each guy. Is the fact that there are twice as many naked men as naked women in this ostensibly macho series a similar, if kinder, “fuck you” nudge to viewers at home? Akin to saying, “Hey, we know you’re loving these badass dudes, but don’t like them too much — they’re all still acting like dicks.”

Throw in fleeting odes to our temporary stay on this Earth and sharp jokes that seemingly come out of nowhere, and there are a lot of little treasures to discover in “Billions.” For those that want to look, there are probably more. (Your mileage out of certain performances may vary based on your tolerance for their characters.)

If the first season of the Showtime drama showed promise before disappointing (when compared to the “prestige TV” it looked to compete against at the Emmys, Globes, and general consensus), Season 2 eventually reorganized the basics to really surprise people; like following up a pop-out on a big swing by drilling a fastball right up the middle. (P.S. To properly honor “Billions,” this review needs far more analogies.) Overall, the series may just be trying to recreate that magnificent Giamatti moment, but now that “Billions” has shown it can get there, it’s worth keeping an eye on this hitter.

This Article is related to: Television and tagged Billions, Showtime, TV Reviews