Director S.J. Clarkson also reveals why it's "a little bit soul-destroying" to know that the BBC/Netflix miniseries will be a quick binge-viewing experience for so many. 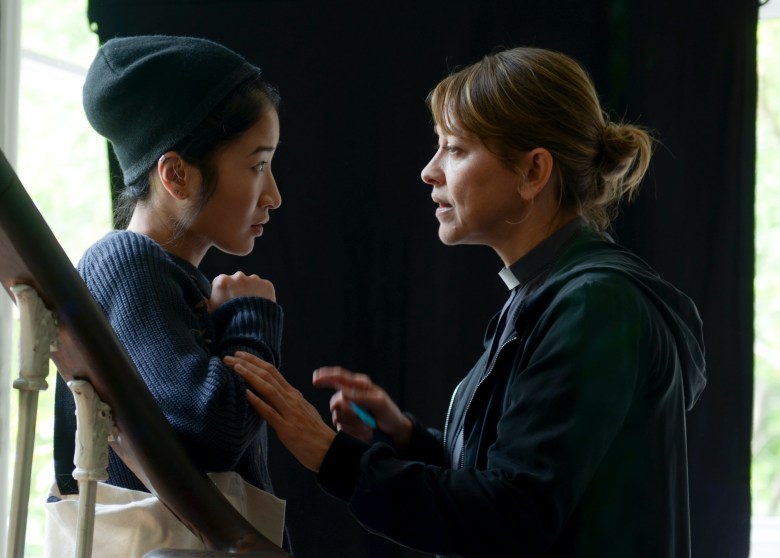 The reason two-time Academy Award nominee David Hare (“The Hours,” “The Reader”) wanted to write the BBC2/Netflix limited series “Collateral” is that he felt no one else was writing television about the issue at its center: Illegal immigration.

“I think the movement of people is the biggest subject of the 21st century and nobody’s writing about it,” he said to IndieWire in a recent interview. “In the last few summers, we’ve had attempted mass migration from Libya, Syria, Iraq, Egypt, from everywhere. People are trying to get into Western countries. And obviously the West is trying to protect itself against the arrival of these people. This is going to play out in the coming years. I wanted to write about it as a matter of urgency.”

The four-hour drama stars the stellar Carey Mulligan (“Mudbound,” “Drive,” “An Education”) as DI Kip Glaspie, a detective investigating the shooting death of a pizza delivery man — a murder which turns out to be part of a much larger story. S.J. Clarkson, whose previous work includes the first two episodes of “Marvel’s Jessica Jones” as well as “Orange is the New Black” and “The Defenders,” directed all four episodes, and the cast also includes a number of faces well-loved by fans of British television, including Billie Piper, John Simm, Nicola Walker, and Orla Brady.

Following the show’s premiere on BBC2 in February, international audiences are now discovering the show via Netflix, which Clarkson told IndieWire she has mixed feelings about. “I do feel that this is binge-worthy viewing. I think it’s exciting to sit down and watch it all,” Clarkson said. “But I spent a year of my life making this, working a lot of seven-day weeks, so the fact that somebody can just devour it in four hours is a little bit soul-destroying. As much as I love it, it’s a bit like the end of ‘The Truman Show,’ where he goes out the door and everybody goes, ‘What’s on the other channel?’” However, the series was addictive viewing for British audiences watching it weekly, making it a ratings hit for the BBC. Hare attributed the show’s success to Mulligan’s star power: “It’s the subject matter that made her want to do it. And when she wants to do it, everybody wants to do it. That was great for us.”

Breaking All the Rules

When Hare originally conceived of “Collateral,” it was as a film. But when he presented the project to the BBC, the first feedback he got was that “it has far too many leading characters. It has seven or eight leading characters and nobody since Bob Altman has been allowed to make a film with a lot of leading characters, so this should be a television series.”

Also, according to Hare, “they said that the people this film is about are not going to see it if it’s in the cinema. If you put it on television, the people it’s about will actually watch it.”

There was a catch, though: Hare had never written episodic television before. So the BBC sent him to producer George Faber to develop the series, which led, in Hare’s words, to “a sort of war.”

One rule Hare broke entirely was revealing the identity of the killer, Army Captain Sandrine Shaw, before the end of the first episode. “Fans of Agatha Christie are going to be very disappointed by it,” he said, “But I hope it’s possible to create tension about why and how a crime is done rather than about who did it.”

But one he compromised on was the issue of whether Shaw and Kip would ever encounter each other on screen. “That was one of the rules of episodic television: Once you’ve created these two wonderful characters, they have to meet. So that became necessary,” Hare said.

But his rebellion was keeping a door between Shaw and Kip for their entire scene together. It might have seemed like a tricky acting challenge, but Clarkson said shooting it was a “fairly painless” process. Clarkson did keep the two actors separated during filming: “When it came to actually doing the scene, we rehearsed it and they were outside the door and inside the room and that’s the actual door, we didn’t cheat it. We shot the interior first and then went outside,” she said.

“I kept them as separate as I could until that moment. In fact, they didn’t have much interaction at all even on the day. I thought it was better for them that they never actually created a relationship other than through the door. I think it gave more truth to that moment.”

“It Should Just Be a Fact That She Is Pregnant”

Mulligan, as is obvious on screen, was pregnant during filming, something that wasn’t a part of Hare’s original conception for the character but ultimately something he had no issue with adding — in fact, he felt it enhanced the entire project. “It seemed to me that it was an ideal opportunity to say that there are women who proceed with their jobs and behave in a completely normal way and get on it with it while being pregnant. All I knew was that I didn’t want to make a big fuss about it and that it should just be a fact that she is pregnant,” he said.

The choice saved Clarkson from having to shoot around Mulligan’s pregnancy, for which she was grateful. “We’ve all done that and it’s doable, but it limits shots, and unless you have lots of money on post-production to get wides where it’s not her, we didn’t want to do that,” she said. “I’d done something similar in a show called ‘Whitechapel’ where the pathologist was first written as a man, but I cast a woman and made her pregnant just because. And we never mentioned it and I liked that because there are women — hundreds, thousands — that go to work pregnant and don’t mention it.”

Plus, Kip being pregnant complemented the fact that refugee Mona (July Namir) is also pregnant. “It’s a huge issue in these detention centers,” Hare said, “Separating women from their children, about whether children should be allowed to be in detention centers. So that lovely parallel between the person who’s suffering from being pregnant and the person who just is pregnant. It just spoke beautifully in the series.”

Fun fact: Even though Mulligan was actually pregnant, that didn’t spare her from having to wear a fake belly for part of the shoot. “When she started, nobody knew,” Clarkson said. “By the time we finished it, she was seven months pregnant. When she started, she was barely twelve weeks. So we had to back into the bump, basically. We started with a bump and then it got reduced until we were basically like ‘Fuck it, use the real bump now. We’re good.'”

Why There Won’t Be A Season 2 These days, even the most seemingly standalone miniseries like “Big Little Lies” will find itself developing a follow-up season. But when asked if that might be in “Collateral’s” future, both Hare and Clarkson were amused by the question.

“Nobody’s asked us. So it’s a no,” Clarkson echoed.

“The pressure’s unbearable,” Hare joked. “The courage I’ve needed to say no when nobody’s asked.”

“Exactly,” Clarkson said. “It’s just been like, ‘Wow, we’re so brave. We said no.’ They never said, ‘Can we have another one?’ Nobody’s asked us. So we’re standing by no.”

From Hare’s point of view, many TV series he’s seen “are unsatisfactory precisely because at the end, the writer is forced to do something which leaves the possibility of a second series open. The last episode is often a mess, because the writer has been asked to leave it open so that a second series is possible. I’ve seen some wonderful series of which the only thing wrong with them is the last episode. And it’s because they have these open endings that don’t actually satisfy the people who followed the series, because they refuse to close it down. Whereas this, I hope, firmly closes down the end.”

IndieWire pointed out that it wouldn’t be hard at all to imagine a second season in which Mulligan is lead detective on another case.

“Who is ever going to complain about time spent watching Carey Mulligan?” Hare replied. “It’s one of the greatest pleasures in film these days. But I have absolutely no intention of writing it.”

Instead, both Hare and Clarkson have moved onto other projects: Clarkson almost immediately directed an episode of the upcoming HBO drama “Succession” after finishing “Collateral,” while Hare has the upcoming drama “The White Crow,” directed by and starring Ralph Fiennes, set to launch this fall.

He’s also writing a new series, though didn’t reveal any details about what it might be, as he prefers to keep things to himself during the early phases of the project. “If you don’t spend a huge amount of time by yourself before you start discussing with other people, then you are simply creating something by committee. I want to be alone, as they say.”

“Collateral” is streaming now on Netflix.

This Article is related to: Television and tagged Carey Mulligan, Collateral, David Hare