The fact that it was Yahoo, not Hulu, that picked up the sixth season of the cult favorite is yet more proof that we're trapped in the darkest timeline. 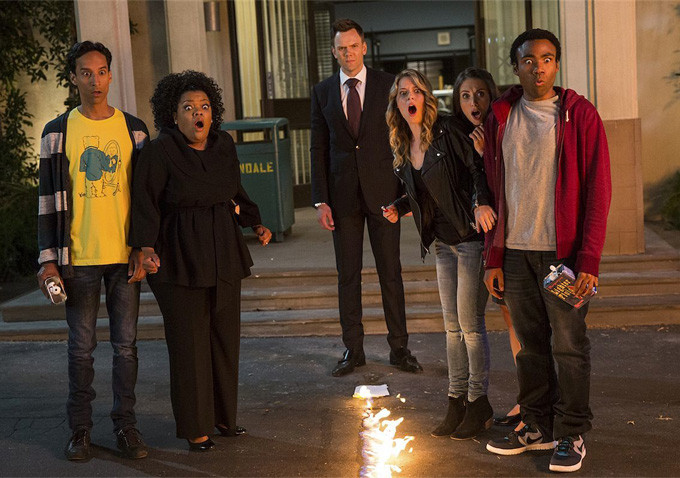 It’s a rallying cry familiar to fans of “Community”: “six seasons and a movie,” a promise that was only met halfway by the fates that guide the entertainment industry. But one reason for that lack of movie is that those who once starred on the NBC cult comedy have gone on to exciting and new projects showcasing their talents, from “Atlanta” (Donald Glover) to “Love” (Gillian Jacobs) to “GLOW” (Alison Brie).

Even Joel McHale has moved on to something new — albeit relatively familiar — with “The Joel McHale Show With Joel McHale,” the new Netflix series that owes a clear debt to E!’s long-running pop culture commentary series “The Soup” (which McHale hosted from 2004-2015). During the most recent episode, guest star Billy Eichner showed up to yell about some stuff (on brand), including a reminder that McHale, one-time star of the canceled series “The Great Indoors,” had been foolish to think he could become a CBS sitcom star. “If you can’t make it on Yahoo, you’re not going to make it on CBS,” Eichner points out.

It was a fascinating callback to something pretty much everyone seems interested in forgetting: The fact that the sixth season of “Community” went from being a triumphant revival to a weirdly forgotten blip in television history — as the centerpiece of Yahoo’s ill-fated “Screen” experiment.

The tale of Yahoo! Screen’s expensive launch and quick decline may be a lesson for other Silicon Valley giants now entering the programming realm, including Facebook, Snap and, yes, Apple.

The irony for “Community” and Yahoo is that perhaps it didn’t have to end the way it did for the show — and the platform. In 2014, after five tumultuous seasons that included a gap year without Harmon as showrunner, NBC had officially canceled “Community,” but many fans of the show were fairly confident that it would find a new home. After all, “Arrested Development” had just been resurrected by Netflix, countless other shows were being continued elsewhere, and “Community” had the sort of fanbase that networks and studios could theoretically trust would follow it anywhere.

For most of those following it back then, it seemed logical that Hulu — which had made the show an online hit even while its broadcast ratings lagged — would be the natural home. And in fact, it nearly was. In an interview with IndieWire back in 2014, well prior to the Season 6 premiere, Harmon said that while Hulu had been actively bidding to continue the series, “In the 11th hour Yahoo scooped it up away from the most likely candidate in the world, which was Hulu. And I’m sure Hulu was not offering a small amount of money.”

“Community” had a rabid fan base, and Yahoo made the bet that its loyal audience would seek out a new platform to find the show. Some did — but Yahoo had a branding problem, as no one quite knew how to find the show or what to download. (That problem might sound familiar here in the year 2018, when Facebook is promoting shows via its “Facebook Watch” tab, while YouTube Red is a subscription service buried within the existing YouTube platform and Apple will be… Well, no one knows yet.)

Yahoo spent a lot of money on developing and launching original programming during that brief period, and “Community” was just one of the properties used to launch Yahoo Screen. But it was promoted as the flagship series for the service — which is perhaps why, when Yahoo shut down Yahoo Screen and took a $42 million markdown over the initiative, the decision was largely linked to “Community.”

Would Yahoo Screen still be around today had Yahoo slowed its roll and not overpaid for a big-ticket item that no one saw? Might “Community” have thrived on Hulu and perhaps even made that movie? It’s tough to say.

If you dig around on the Yahoo site, you can still find evidence of “Community” Season 6 — the episodes are still there, albeit buried in the archives, and there’s also a supplemental series called “Community Cheat Sheet” which offered background on running jokes, such as the show’s disdain for Jim Belushi.

But that’s likely not where you’re going to watch “Community,” as Season 6 has been available since August 2016 on Hulu. Following the exits of cast members Chevy Chase, Donald Glover, and Yvette Nicole Brown, there’s no denying that the magic of the early seasons isn’t quite there. However, let’s be very clear about this: There is much greatness and joy to be found in those 13 episodes, proving the depths of creativity that helped drive the show as far as it did.

In addition, not only are new cast members Keith David and Paget Brewster not being forced to replace Yvette Nicole Brown or Donald Glover, but their performances are magnificent — both Elroy and Frankie, as characters, bring forth a unique specificity that deserves a great deal more attention. David’s comedic talents are unquestionable, but Brewster, in particular, is a force. While she’s worked semi-consistently for years, the fact that she didn’t follow up “Community” with a starring role in a brilliant broadcast sitcom is yet more evidence that people really didn’t watch Season 6.

The scale of Season 6 is a bit more restrained, with more than one installment feeling like a bottle episode that’s trying to pretend it’s not. But it does have its spurts of craziness that prove reminiscent of the show at its best, and again, David and Brewster are so damn good.

But that may be the last we see of them, or the study room, or any of the rest of the Greendale gang, something the show prepared us for even before the collapse of Yahoo’s original content aspirations. The sixth season finale, “Emotional Consequences of Broadcast Television,” features everyone imagining their own versions of what a seventh season would be, each new tweak to the premise seeming to say that really, there’s no point to keep going, and that we should just enjoy what we had. Many stories about “Community’s” behind-the-scenes drama have emerged over the years — just recently, Harmon and writer Megan Ganz had a public confrontation and later resolution over his abusive behavior towards her, while a New Yorker profile of Glover revealed that Chevy Chase made racist jokes towards him on set. What we saw on screen, though, was a smart and heartfelt comedy about humanity and how pop culture warps our perception of it, a point-of-view that wouldn’t be unwelcome today.

Abed (Danny Pudi, always one of the show’s most undervalued performers) has a truly beautiful monologue in what we should probably come to accept as the series finale, about what television should be: “It has to be joyful, effortless, fun. TV defeats it’s own purpose when it’s pushing an agenda, or trying to defeat other TV or being proud or ashamed of itself for existing. It’s TV, it’s comfort. It’s a friend you’ve known so well, and for so long you just let it be with you and it needs to be okay for it to have a bad day or phone in a day. And it needs to be okay for it to get on a boat with Levar Burton and never come back. Because eventually, it all will.”

If “Community” Season 6 had been originally distributed on Hulu, the platform where the original seasons had thrived, it’s not hard to imagine the series becoming an ongoing part of the platform’s comedy slate, running concurrently with original series like “Casual” and “Difficult People.” Would there have been a seventh season (or, yes, a movie)? And would the world be a better place today if it had? It’s a timeline that we can’t access without Evil Abed’s universe-crossing technology, we’ll never really know, but Season 6 will always leave us wondering.

This Article is related to: Television and tagged Community, Dan Harmon, Yahoo!