Max Irons takes over for Robert Redford in "Condor," a solid spy story that updates the right elements without tarnishing old treasures. 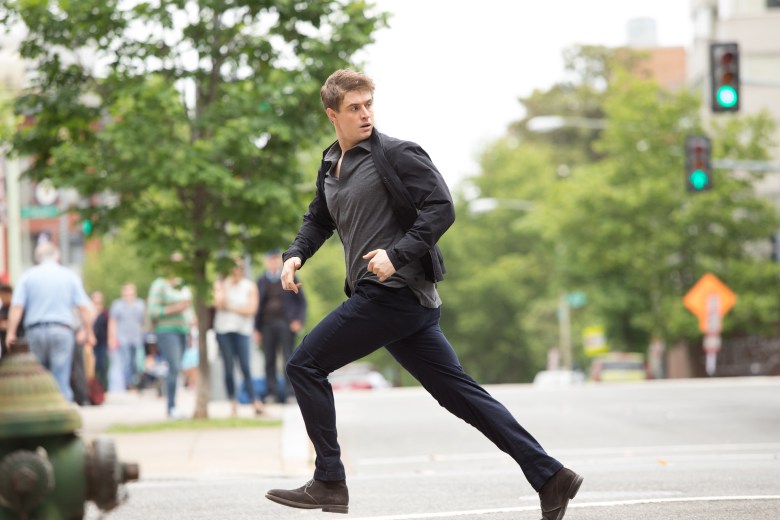 It’s not just that Sydney Pollack’s 1975 classic feels untouchable (and relatively timeless, despite the fact that part of Robert Redford’s job is reading newspapers); it’s that the series directly lifting from the film comes from a somewhat unproven pedigree and will play on a network only accessible to satellite subscribers.

Well, after the first two episodes, the latter point isn’t a warning so much as a shame. Jason Smilovic (“Lucky Number Slevin”) and Todd Katzberg’s “Condor” isn’t a “drop everything and subscribe to DirecTV” kind of show, but it is an engaging spy story suitably updated for modern times and slyly incorporating elements of the original film.

After being called in by the top brass to help catch a suspected terrorist, Joe Turner (Max Irons) is done with the intelligence business. His bosses tried to use a computer program he built years ago to suss out a terrorist threat and, because it worked, now they’re willing to keep misapplying the program in the future. That’s not exactly what he signed up for, but it does make him question his predetermined beliefs. But before he can firmly decide his future (and please skip to the next paragraph if you’re unfamiliar with the previous “Condor” book or movie), Joe’s clandestine station is attacked. He’s the only survivor, and now he’s got to figure out why his coworkers were killed and what he can do to save himself.

Is the agency after him? Is someone else? Who can be trusted? These paranoid questions are the same ones posed by the movie, and they’re certainly relevant today. In Pollack’s film, every government agent is a suspect — even the mailman comes after Redford’s Joe Turner — and there’s plenty of reason to bring up similar institutional doubts in 2018. “Condor” isn’t particularly political (yet), but it does shift from New York to Washington D.C. and digs into the American government’s questionable moral compass and ties to big business. Perhaps the biggest shift isn’t even updating ’70s-era job descriptions, style, and locations from 1975 to 2018, but that the star of “Condor” is the anti-Robert Redford. Not only is Max Irons of European descent instead of a prototypical All-American (he’s the son of Jeremy Irons and Sinead Cusack, making him an Englishman and Irishman), but he’s a relative newcomer to domestic audiences. By the time Redford made “Three Days of the Condor,” he already had “Butch Cassidy and the Sundance Kid,” “The Candidate,” “Jeremiah Johnson,” “The Sting,” and “The Way We Were” in his rearview. Irons has… “The White Queen” and a supporting role in the already forgotten teen adaptation of “The Host.” (Saoirse Ronan was in that, you guys! She was the star!)

Yet much like the series’ unexpected success, Irons largely pulls it off. His take on Joe Turner is slightly more volatile than Redford’s, mainly because he’s slightly younger — think of Ben Affleck in “The Sum of All Fears” as opposed to Harrison Ford in “Patriot Games.” His accent slips from time to time, but he’s a believably green CIA analyst (if also a surprisingly pretty one) stuck in an unexpected life-or-death scenario. Even after two hours, Joe is still trying to come to terms with his situation, so it makes sense that Irons’ performance would still be leaning harder into desperation than confidence; he hasn’t found that yet, but it’s clear he can.

Smilovic and Katzberg surround Irons with proven talent who more than do their part, too. William Hurt plays Joe’s Uncle Bob Partridge, a higher-ranking member of the CIA who works closely with the deputy director (Bob Balaban). Uncle Bob, not Balaban, tries to explain to Joe why he’s willing to do what he does, and why the line continues to blur, but he’s not an overtly manipulative force, nor even an altogether suspicious individual. Hurt plays him fairly straight with a touch of sympathy and trace of caution.

The same cannot be said for Nathan Fowler (Brendan Fraser). Fowler is the first character we meet in the pilot, as he buries a bag of dead prairie dogs in the middle of a Navajo reservation (which is even more eerie than it sounds), and he goes after what he wants aggressively. Though flashbacks in Episode 2 give him a somewhat empathetic backstory (and a scene that Fraser absolutely kills), Fowler is very much a bad dude. He’s on a mission to protect the country for personal reasons, and it’s clear his vendetta has been clouded by his boss’ (Jamie McShane) greed and difficult on-the-job experience.

“Condor” can be a little too blunt — a few of the villains’ lines could use some massaging, especially in romantic scenes — and it hasn’t made any big moves to prove why we need another adaptation, but it has a good handle on the core story. And the story, as we know, is a good one.

“Condor” premiered at the SXSW Film Festival. Season 1 premieres June 6 on Audience Network. The series is produced by MGM Television and Skydance Television.

This Article is related to: Television and tagged Condor, Three Days Of The Condor, TV Reviews