Hawke says the "Before" trilogy feels complete after the third installment, but that doesn't mean it can't continue in some way. 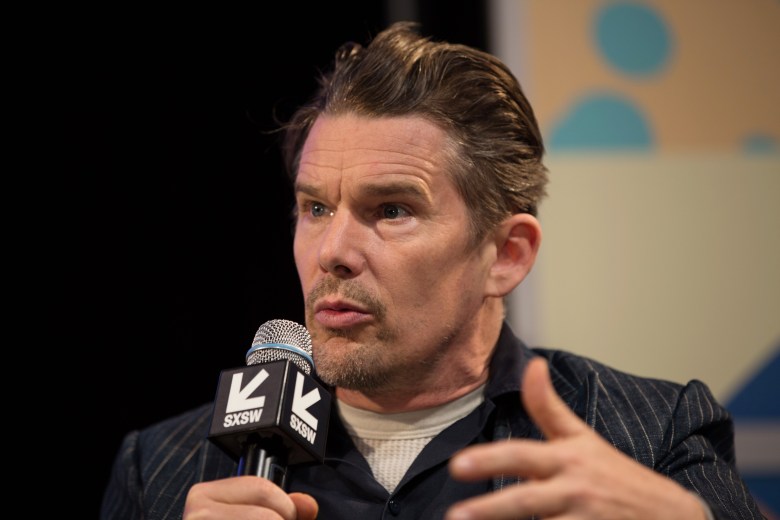 Ethan Hawke is at the SXSW Film Festival this year with his latest directorial effort “Blaze,” and he spent some time reflecting on his legendary indie film career during an hour-long discussion with IndieWire’s chief film critic Eric Kohn. Richard Linklater was mentioned numerous times throughout the chat, which is hardly a surprise given that Hawke is the star of both the “Before” trilogy and “Boyhood.” The actor earned an Oscar nomination for the latter.

“A lot of directors like to have power over people. But with Linklater, it’s always our movie,” Hawke said of the filmmaker. “When he says wrap, it feels like it’s your film. His greatest skill is using his confidence and his knowledge to empower others, to show them respect, and to lift them up.”

Linklater catapulted Hawke’s career when he cast him in “Before Sunrise” when he was only in his early twenties. Hawke still finds much to be fascinated about in terms of his casting in the indie classic.

“Richard Linklater cast two young people, we were 23 and 24 years old during ‘Before Sunrise,’ neither one of us had written or directed anything when we were cast, but both of us have gone on to write and direct our own movies,” Hawke explained. “Did he see in us young people who were going to go on to do that? Or did that experience turn is into those people? I don’t know if Rick had a phenomenal eye and he knew he saw in us these young filmmakers and wanted us to be part of the process, or if that process created us.”

Similarly, Hawke remains surprised “Sunrise” launched a trilogy that to this day is still revered as one of the all-time great film series. Hawke and Delpy helped Linklater create the characters of Jesse and Celine, but they never thought during development that sequels were remotely possible.

“I don’t think we ever thought of revisiting the characters while making ‘Before Sunrise,” Hawke said. “When we left that experience, the three of us thought maybe we should do a second movie. It was fun. We laughed together, and we liked that. In our mind, however, the first movie had been a relative failure. Some critics liked it but the movie bombed at the box office, so the idea we would make a sequel to this movie was so arrogant. It really is the lowest grossing film of all time to inspire a trilogy. I remember a really good friend of mine saying, ‘Wow you guys really believe in yourself.'” “Before Sunrise” spawned two equally acclaimed sequels, “Before Sunset” and “Before Midnight.” Fans have been clamoring for the franchise to continue with another look at Jesse and Celine later in life, but Hawke isn’t so sure about the future of the trilogy.

“There is something about ‘Before Midnight’ that feels like a complete circle,” Hawke explained. “The first film starts with a couple in their 40s arguing on a train and the camera finds two young people listening to them. In the third film we kind of become that couple. It feels finished to me, which isn’t to say Rick or Julie is finished. If we were to visit Jesse and Celine, it would have to be in some new way. I don’t know what that would be, but it probably wouldn’t be called “Before…” something. I don’t know. It feels done.”

Just as unlikely is another secret 12-year-long project in the vein of “Boyhood.” Hawke admitted taking on a similar filmmaking journey as Linklater’s magnum opus “would be fun,” but he said it’s probably just too much work for Linklater, who already has mastered the challenge anyways. The actor called the making of “Boyhood” an “exercise of patience,” and he’s not sure anyone would want to commit to something like that again. Hawke can’t even get over the fact that people are still talking about “Boyhood” in the first place.

“The idea that it would be something you could bring up and people would know what you’re talking about seemed absolutely ludicrous at the time of making it,” Hawke said. “The idea we could use time and I could do a portrait of fatherhood and I would have 12 years to do it was so great. The movie gets at how effortlessly six years can go by in a flash, and making it the way we did is why I think.”

“It was a really good idea,” he continued. “I had no doubt it would be high in quality, I just thought it would play at the MoMA or something like that.”

“Boyhood” went on to earn the best reviews of any film in 2014. The indie grossed over $40 million opposite a $4 million budget and earned six Academy Award nominations, including Best Picture and Best Director.

You can watch the entire talk below.

This Article is related to: Film and tagged Before Midnight, Before Sunrise, Boyhood, Ethan Hawke