"I remember a time when the major studios didn't believe that a woman or a minority could open a superhero movie. And I remember that time is because it was March of last year." 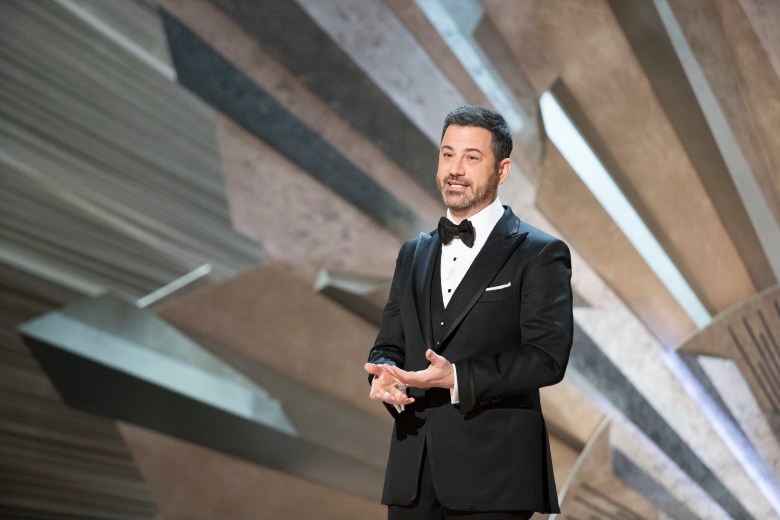 Jimmy Kimmel opened the 90th Oscars on Sunday by addressing last year’s envelope snafu. “This year when you hear your name called, don’t get up right away,” he warned the crowd. “Give us a minute!” (Scroll down to watch the full opening monologue.)

Kimmel called what happened last year, when “La La Land” was accidentally announced as the Best Picture — before it was revealed that “Moonlight” was actually the winner — “unfortunate.” He then quipped that he had the real reason it all went down that way: “Here’s what happened, and this is true: Last year, about a week before the show, the producers asked me if I wanted to do some comedy with the accountants. I said no. So the accountants went ahead and did comedy on their own. And I have to hand it to them, it was hilarious.

“It won’t happen again. This year the chairman of PricewaterhouseCoopers said, ‘our singular focus will be on the show and delivering the correct envelopes.’ Which does make sense, but just out of curiosity, what was your focus the other 89 years?”

After that, Kimmel went on to give his spin on the #MeToo and Time’s Up movements, joking that the Oscar statue was perhaps the “most beloved and respected man in Hollywood,” because he “keeps his hands where you can see them,” “never says a rude word,” and most importantly, has “no penis at all.”

He also joked that Hollywood has been clueless about women for years — this is the town that “made a movie called ‘What Women Want,’ and it starred Mel Gibson.”

Then came the Harvey Weinstein reference, noting that the Motion Picture Academy tossed the disgraced executive out of its membership ranks. “Harvey deserved it the most,” he said, but Kimmel also noted that the only other person every kicked out was character actor Carmine Paretti, who was expelled for sharing screeners.

In other words, he “got the same punishment as Harvey Weinstein, for giving his neighbor a copy of ‘Seabiscuit’ on VHS.”

Kimmel mostly stuck to positivity in his opening monologue, which he said would be an ongoing theme of the awards show. But he did point out that all of this year’s nominees got crushed at the box office by “Black Panther.”

“The success of ‘Black Panther’ is one of many positive stories this year especially for African Americans and [Disney boss] Bob Iger,” he said. “I remember a time when the major studios didn’t believe that a woman or a minority could open a superhero movie. And I remember that time is because it was March of last year.”

Kimmel also noted that only 11 percent of movies are directed by women, and also pointed to pay inequity issues, such as Mark Wahlberg being paid $1.5 million for reshoots on “All the Money in the World,” while Michelle Williams took scale.

“What made it especially unfair, Mark and Michelle are represented by the same agency,” he said. “If we can’t trust agents who can we trust?”

The host didn’t dive much into politics during his opener, mentioning Donald Trump just once, joking that Trump considered “Get Out” the “best first three quarters of a movie this year.”

Later, he added that only two of the nine Best Picture nominees made more than $100 million. But “we don’t make movies like ‘Call Me By Your Name’ to make a lot of money, we make them to anger Mike Pence.”

And noting that Oscar is 90 years old, he added that it “means he’s probably at home right now watching Fox News.” Kimmel ended his monologue by offering the audience a bit of a bribe: To keep winners’ speeches on the short side, he offered a jet ski to the honoree with the shortest speech.

This represents the second consecutive year that Kimmel has hosted the Oscars, having received high marks for his inaugural gig last year. Of course, the 89th Academy Awards will be most remembered for Envelopegate, and much of this year’s Oscars marketing campaign centered on that moment.

“The challenge is that a million jokes have been made about this subject, so that’s really the challenge and finding a fresh way of coming at it,” Kimmel told reporters in January at a Television Critics Association press tour session about the Oscars. “But 99 percent of the show went pretty well. So I don’t think of it as the Titanic-caliber disaster that most people do when they reflect on it. And ultimately, it’s just a bunch of celebrities handing each other trophies. Let’s be honest.”

Of course, the possibility of such a moment happening again will be pretty slim, given new protocols put in place to prevent such a flub. But quipped Kimmel, “If it happens again, literally everyone that works at ABC should be fired, right? Because it happens one time, that’s, I think, understandable. But if it happens a second time, no one is competent enough to be running a television show or network. So I don’t think it’s going to happen again. If it did, I would have to admit, it would tickle me deeply.”

As for the topics that Kimmel planned to address on Sunday night, the host noted that the #MeToo and Time’s Up movements, having been the biggest story in entertainment over the past year, would likely be addressed in his monologue — “unless there’s a nuclear weapon headed towards Sacramento that night or something. Then we will probably skip it and go right to that.”

But Kimmel said he didn’t plan to get too political during the show. “Ultimately, you have to remember why you are there and it’s not about you, and you’re there to entertain people who are there on the biggest night of their lives, and if it gets too heavy, then I think you’re taking away from that,” he said. “I think it’s important to make the people in the room laugh, and I think it’s important for the audience at home to hear people laughing. It’s maybe even more important than making them laugh, themselves.”

The 90th Oscars opened with a play on history, showing the audience in 1940s newsreel style black and white, narrated by Kimmel as an old-timey news anchor. Watch below:

This Article is related to: Awards and tagged Jimmy Kimmel, Oscars