In the wake of the lowest-rated Oscars, Academy president John Bailey's #MeToo moment becomes one of the organization's many serious problems. 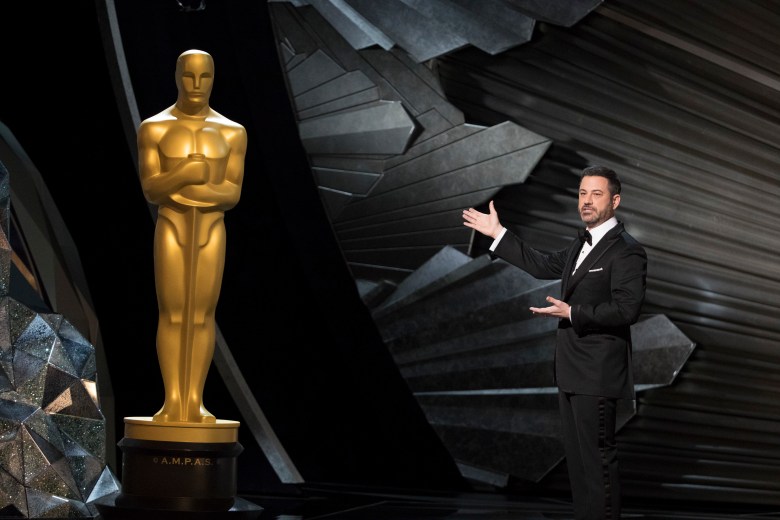 The Academy of Motion Picture Arts and Sciences’ mission is to spotlight Hollywood, with the Oscars providing a global, glamorous platform to promote the year’s best movies. This year, however, the ceremony included some unusual omissions — tacit acknowledgements that the industry is also capable of making some significant missteps.

There were no ritual accountants on the red carpet, thanks to last year’s PriceWaterhouseCoopers mistake that allowed the wrong Best Picture ballot to reach the stage. There was no Best Actor winner to presenting the Best Actress award, as tradition usually dictates; the sexual harassment accusations faced by last year’s winner, Casey Affleck, wouldn’t play in the #MeToo world. And, for reasons unknown, there was no speech from the new president of the Academy, John Bailey. Guillermo del Toro and Warren Beatty at the Oscars 2018.

Now we may have an inkling as to why: Yesterday, Variety reported that Bailey is under investigation for sexual harassment. The industry and the press are full of questions that the Academy, at least, has no intention of answering any time soon. Its statement, released March 16, below:

The Academy treats any complaints confidentially to protect all parties. The Membership Committee reviews all complaints brought against Academy members according to our Standards of Conduct process, and after completing reviews, reports to the Board of Governors. We will not comment further on such matters until the full review is completed.

Less than two months ago, the Academy installed a new Standards of Conduct and a “fair and methodical process,” as described by CEO Dawn Hudson, for determining “whether a claim will be brought to the Board for for possible action regarding membership status.” Now, that code is being tested as the Academy’s president goes through its own gauntlet.

Here are the challenges facing the Academy as it goes forward: 1. Can the organization salvage its reputation?

“I called Tom Sherak this morning and resigned as a producer of the 84th Academy Awards telecast. Being asked to help put on the Oscar show was the proudest moment of my career. But as painful as this may be for me, it would be worse if my association with the show were to be a distraction from the Academy and the high ideals it represents.” (Full statement here.)

High ideals. That’s what the Bailey harassment complaints threaten to destroy.  The Academy expelled Harvey Weinstein from its membership ranks last October, the first major institution to do so. It was one Hollywood organization that seemed sacrosanct, representing the way Hollywood wanted to see itself.

As Golden Globes 2018 host Seth Meyers quipped in his opening monologue, “There’s a new era under way. I can tell because it’s been this long since a white man has been nervous in Hollywood.”

One of those white men was 75-year-old Bailey. When I interviewed the new AMPAS president over Labor Day weekend in Telluride, the intellectual cinephile was cocky and charming, full of confidence about the changes he was bringing to the Academy, from pushing forward honorary Oscars for Agnes Varda and Owen Roizman to opening up the foreign language committee to growing the international membership. Looking back, I realize that when I saw him months later, post-Weinstein, at an Academy Museum unveiling and other pre-Oscar events, he was quieter, sadder, less forthcoming. His speech at the Academy Nominees luncheon contained a money quote, one that quickly became the center of tweets and headlines even before the event ended: “The fossilized bedrock of many of Hollywood’s worst abuses are being jackhammered into oblivion. Nowhere is this being made clearer than in the richness of many of this year’s nominated films.”

He didn’t like that. On the way out of the luncheon, he told me that he was upset that his own quote was the focus of the press coverage. I was surprised he was surprised. “Of course it was,” I said. Was the pot calling the kettle black?

The story continues to roll out — and Bailey could emerge unscathed — but his first Nominees Luncheon could be his last. “These days,” said one press agent, “allegations mean you step down while somebody takes over the reins.” Several industry insiders consider Bailey to be an effective leader — and a grownup. “I am going to lose my president,” said one downcast Academy member Friday. Courtesy of the Consulate General of France

2. When will we learn the answers to these questions?

When did the alleged sexual harassment take place? Was it when Bailey was Academy president, or before, when he was on the board?

Did these encounters occur in the Academy workplace with Academy staffers? Or did they occur somewhere else? But if so, why bring the complaints to the Academy? (This investigation is not a legal proceeding with subpoena powers.)

Are we talking about three separate instances of harassment, or more? Is one lawyer representing all three women? The complaints were all filed on the same day. How long has the Academy been aware of the alleged encounters?

Did any women ever file complaints against Bailey with the Cinematographers Guild? (A spokesman for the guild refused to comment.)

What is the timeline going forward? When does the Academy expect the full review to be completed? Governor David Rubin, who ran against Bailey representing the casting directors branch, chairs the membership committee, which will investigate Bailey as an Academy member. Rubin will then report his findings to the Board of Governors. When is the next board meeting?

Will Bailey be open and transparent with the Academy? Will he step aside from being president until the investigation is complete? Many are urging him to do so, and let Lois Burwell (“Braveheart”), the board vice president from the Makeup and Hair Stylist branch, take over in the interim. “She’s a nice British lady,” said one Academy member. 3. What are the new rules of acceptable behavior?

There is Before Harvey and After Harvey, and it’s hard to imagine someone stupid enough to sexually harass anyone today. Sexual harassment isn’t OK anywhere, but anyone who has been on a film set knows, it’s where “Rules Don’t Apply.” (Imagine how that 2016 Warren Beatty movie would be greeted today.) Late last year, Dustin Hoffman faced multiple accusations of on-set sexual harassment, but under Bailey, the Academy decide to support Hoffman as a presenter at November’s Governors Awards.

Predictably, the pendulum keeps swinging. Some men have begun to speak out for due process and against a perceived witch hunt (most recently Terry Gilliam, who fears that #MeToo is turning into “mob rule”), but there’s another element at play as well. No one has an easy time finding jobs in Hollywood, and while many applaud more assignments going to women and people of color as long overdue, they also rankle the underemployed who don’t welcome the competition. Many men who have been “bad boys” at one time or another are scared shitless that their livelihood could be taken away, their careers and legacy erased. Hollywood is still protecting some big fish who have yet to be hooked. To put it plainly, the Oscars don’t need problems like investigating its own leadership; it’s got plenty of its own issues. At the 2018 Oscars, Hollywood’s best foot forward meant featuring Oscar contenders and presenters who represented movements like #MeToo, #TimesUp, and LGBT. (A montage saluting veterans and a trip across the street to a brick-and-mortar theater felt tacked on.) Mainstream America wasn’t on board; this year’s show drew the lowest ratings in its history, with 26.5 million viewers.

More than ever there’s a sense that the Oscars, like the two-hour movies Hollywood is trying to keep alive in a digital streaming age, represent a dying art. Movies for adults are made by specialty subsidiaries, like Fox Searchlight’s Best Picture Oscar-winner “The Shape of Water,” an arthouse hit unfamiliar to most Americans. (Fingers are crossed the division survives Fox’s sale to studio behemoth Disney.) We live in an increasingly fractionalized world: Where the Oscars once played to a huge audience, they are now niche. A rendering of the lobby inside what is now the museum’s Saban building.

5. Whither the Academy Museum of Motion Pictures?

Which brings us to the elephant in the room. The Oscars bring in much-needed revenue to a philanthropic Academy that used to be very wealthy. Now the organization is strapped for cash as it aims to complete construction on an estimated $500-million museum that was to be unveiled in 2017 but now heads for a 2019 launch.

When the Academy renewed CEO Dawn Hudson’s three-year-contract in 2017, she was expected to pull back from her museum duties, but has remained closely involved via the Academy Museum Foundation board. Museum executives have come and gone within a fractious environment, but the January resignation of COO Richard Cherry was a real blow; the former Broad Museum deputy director quit his Academy Museum post after barely a year in the job. Fundraising continues in order to fill a $90-million gap, and museum director Kerry Brougher is still seeking a new chief curator, among other key positions.

Hudson, who openly did not get along with last AMPAS president Cheryl Boone-Isaacs, enjoyed a workmanlike if chilly relationship with Bailey, who won against her chosen candidates for the presidency. He was a powerful force at the Academy. With him sidelined until his status is clear, Hudson will be running things on her own.