How the tables have turned. 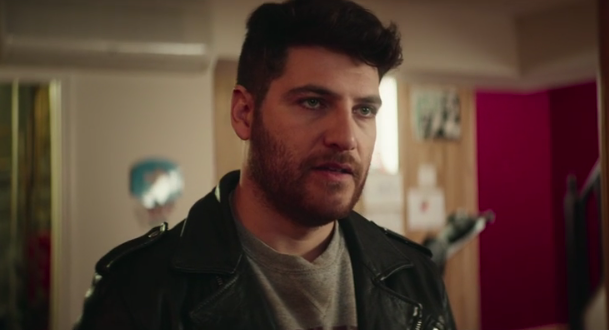 Adam Pally in “Most Likely to Murder”

If “My Crazy Ex-Girlfriend” were a movie, it might look a lot like “Most Likely to Murder.” Continuing the tradition of TV hitmakers venturing into movie-making, this dark slapstick comedy comes directly from the twisted mind of “Ex-Girlfriend” writer Dan Gregor, husband of the show’s creator, Rachel Bloom. Bloom stars alongside Adam Pally (“The Mindy Project”) in a reversal of her musical show, where she gets to be stalked by a crazy ex-boyfriend. At least, that’s what this first trailer makes it look like.

Pally plays Billy, an out of shape former popular kid who spends his days pining after his ex, Kara (Rachel Bloom). After he discovers Kara is now dating former dorkwad Lowell (Vincent Kartheiser), he begins to suspect Lowell of nefarious doings. Convinced Lowell murdered his mother after maybe seeing him do something creepy one time, Billy embarks on his own unofficial investigation of his new rival.

“Most Likely to Murder” also stars comedy heavyweights Billy Eichner, Didi Conn, and Hasan Minhaj. It will premiere at the SXSW Film Festival later this month, and will be released on Digital and On Demand May 1.

Check out the trailer below. (Originally reported by EW).

This Article is related to: Film and tagged Adam Pally, Most LIkely to Murder, Rachel Bloom, Trailers