The first season feels like three different shows at once, but by the end, it definitely has its voice. 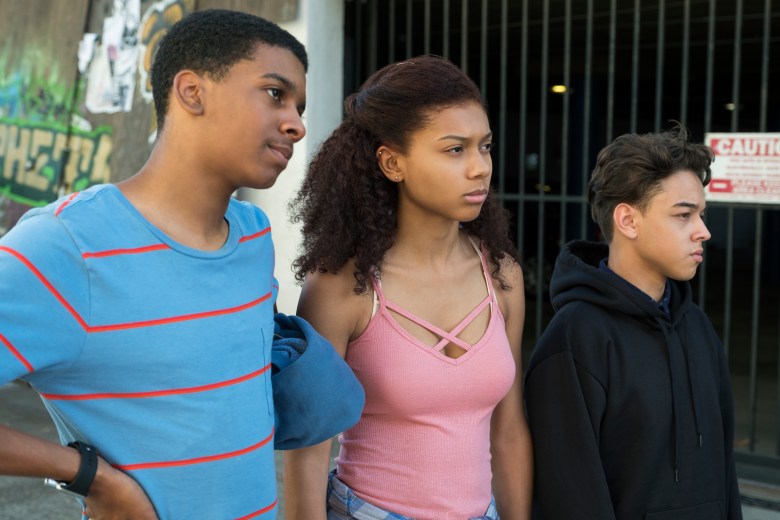 “On My Block” viewers, prepare yourself for quite the roller coaster. The 10-episode first season focuses on Netflix’s new favorite demographic, young teens, but the stakes go far beyond the typical high school drama. And also it’s quite often very funny, in a way that leaves you disoriented, unsure if what you’re watching is a comedy or a drama, kid-appropriate or all too adult. It’s “Sixteen Candles” meets “The Goonies” meets “Boyz in the Hood,” sometimes all at once, and it is chock full of feels.

[Editor’s note: The following contains spoilers for the “On My Block” Season 1, including the finale, follow.]

“On My Block,” according to Netflix, “may be unsuitable for children ages 14 and under,” which means that the characters it tracks are barely old enough to watch it. At the beginning of the season, best friends Monse (Sierra Capri), Ruby (Jason Genao), Cesar (Diego Tinoco), and Jamal (Brett Gray) are all about to begin their first year of high school in South Central Los Angeles, a neighborhood where hearing gunshots is an everyday part of life — to the point where the kids make a joke out of guessing the caliber of bullet.

There are three major threads to the first season of “On My Block,” each of which, at the beginning, feel like they represent a completely different show. First, there’s the buried romance between Monse and Cesar, which eventually coalesces into a love quadrangle when Ruby’s family takes in Olivia (Ronni Hawk) after her parents get deported. While Ruby’s feelings for her begin as just a physical reaction to sharing a house with a cute girl he’s not related to, they intensify just as Olivia and Cesar end up dating, because Monse doesn’t want her feelings for Cesar to ruin their group dynamic and thus tries to end things with him.

Then there’s Jamal, whose initial storyline (trying to keep his parents from finding out that he quit the football team by faking a number of injuries) gets put aside when he’s caught up in an epic “Goonies”-esque hunt for the lost spoils of an infamous local robbery. While the other kids help him out as he searches for clues, it’s largely his obsession, and one that keeps him relatively distant from the rest of the crew. And finally, there’s Cesar, who hoped to avoid following in his brother Oscar’s (Julio Macias) mistake of joining a gang. But when Oscar gets out of prison, he gets drawn into his brother’s world, where the threat of violence is all too real.

It’s Cesar’s storyline that keeps dragging “On My Block” away from the heightened reality of a fun teen dramedy and into a far grimmer look at the world, one where death is a very real possibility. Sure, the casual acceptance all four kids have when it comes to the violence that surrounds them is believable to a degree; when a school dance is canceled because someone brought a gun, they shrug it off like it was due to the weather.

The most consistent element of the series is its constant acknowledgment of these characters’ ethnicity and economic status (and its extremely inclusive cast is a welcome sight). One of the best lines comes from Monse, when attempting to shoot down Jamal’s fascination with the missing cash: “We’re brown! Only white kids find treasure.”

But moments on the show run an emotional gamut so intense that you’re never really sure what you’re in for — take, for example, a scene when Cesar finds himself in the backseat of a police car during a neighborhood lockdown. “You’re in big trouble,” the officer says…and then proceeds to give Cesar some advice on his complicated romantic life.

These abrupt twists and turns ensure that “On My Block” is never boring, but there’s something to be said for a little bit more consistency; the emotional whiplash is occasionally tough to handle. Endearing in his neuroses, Gray as Jamal offers up some really delightful comic relief, even when he’s acting opposite a ceramic garden gnome, but so much of his quest to find the lost “treasure” feels out of sync with the more grounded action happening elsewhere. Same goes for some of the supporting cast, including the crude but fearless Jasmine (Jessica Marie Garcia) and Ruby’s dope-smoking abulita, who are both singular in their own respects but, once again, feel like they belong on different shows. The real issue is when these disparate elements collide, especially in the final episode of the season. “Chapter 10” brings two of these major storylines together for an ending that tops “Romeo & Juliet,” at least on the basis of shock value. Olivia’s quinceañera, which Ruby has been meticulously planning for multiple episodes, is everything a 15-year-old girl’s extravagant birthday party should be… up until the moment when rival gang member Latrell (Jahking Guillory) charges in with a gun, aiming for Cesar but shooting Ruby and Olivia instead.

Ruby’s positive energy and good heart make him easily one of the show’s standouts; right before the dancing starts at the quince, he gets a real kiss from Olivia at last, and as a viewer you just want to cheer. So minutes later, watching him literally gasp for breath in the final minutes of the finale is heartbreaking, even if previous episodes had done plenty to remind us that in this world, violence is a fact of life.

“On My Block” was created by Lauren Iungerich, who previously created the MTV dark comedy “Awkward,” and Eddie Gonzalez & Jeremy Haft, who recently wrote “All Eyez on Me.” And really, at first the show does feel exactly like what might happen if the creator of a MTV dark comedy and the writers of a Tupac biopic teamed up together to make a show.

It’s a combination that at first doesn’t really seem to click, but by the end of the season, “On My Block” does feel like a world unto itself, a universe with its own rules and logic. And the show is certainly bingeable and engaging enough to make one desire a second season, if only because Iungerich, Eddie Gonzalez, and Jeremy Haft earned the weight of that ending, one that’s going to haunt us for some time.

This Article is related to: Television and tagged Netflix, On My Block, TV Reviews